The Discovery of Fast Radio Bursts

One of the wonderful things about astronomy is that, even though it has existed as a science for thousands of years, we still occasionally discover completely new and unexpected phenomena.  In fact, just last month there was a Science paper which outlined the discovery of a set of four very short radio pulses which seem to originate deep in space.  These “Fast Radio Bursts” last only a few micro-seconds, are brighter than any other astronomical phenomena yet discovered in the radio, don’t have known counterparts at any other wavelength, and don’t seem to repeat (at least not on the timescale of a few years).  In the words of today’s paper, “their origin is an intriguing mystery.” 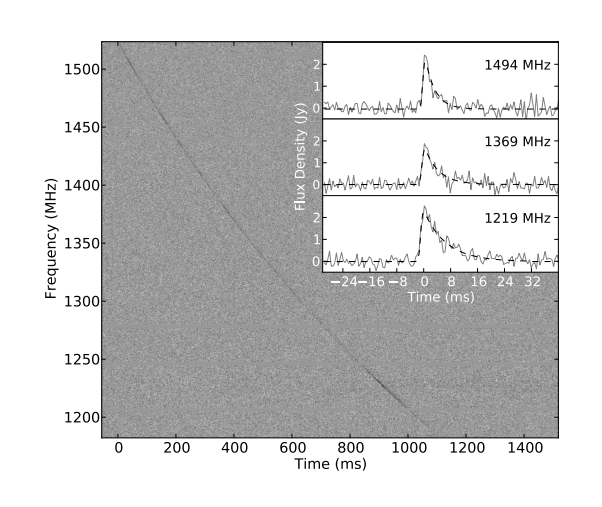 Figure 1: The spectrum of one of the four recently discovered fast radio bursts as a function of time. The diagonal line shows that lower frequencies arrived at later times. This indicates that the bursts are extra-galactic in nature (see text). From Thornton et al. 2013, Science.

Before we get into today’s paper, which offers a theory about what these fast radio bursts might be, I would like to review why their discoverers concluded these bursts were extra-galactic in nature.  After all, one can hardly argue that Earth is quiet at radio frequencies.  How can one tell if a radio signal originates on Earth or in a galaxy far, far, away?

The key lies in a process known as interstellar dispersion.  In order to understand this process we need to remember a few things.  First, although intergalactic space is quite empty, it is not actually a vacuum.  Second, light (including radio waves) only travels at the canonical value “c” in a true vacuum.  In any material, it will travel slightly slower. And third, the speed at which light wave travels through a medium will depend on its frequency (in vacuum it does not). Hence, if a pulse emitted somewhere in the universe initially contains several frequencies of light, each of those frequency components will take a slightly different amount of time to reach Earth.  The further the light had to travel through space, the more pronounced this smearing or dispersion will be.

Hence, by examining the radio pulses to see if different frequency components arrived at different times, one can tell if they originated on Earth (in which case the smearing would be too small to measure) or much further away.  And an example of this for one of the fast radio bursts is shown in Figure 1.  The smaller frequencies clearly arrive later.  Based on the amount of delay, the discoverers estimate that the bursts originated somewhere between 1.7 and 3.2 Giga-parsecs (5 to 10 billion light years) away. 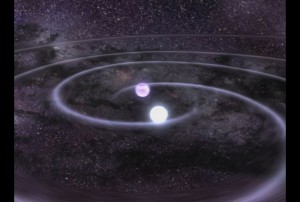 So, what are these fast radio bursts? The author of today’s paper suggests that they may be produced by the merger of two neutron stars (NSs).  The proposal hinges on the fact that, in the final milliseconds before merging, the rotation periods of the two NSs should synchronize (like the Earth-Moon system).  At this point their magnetic fields should also synchronize allowing radio emission to be produced from a mechanism similar to radio emission from isolated pulsars (see this astrobite for more info).  The authors argue that not only does this mechanism explain the duration of the events (the emission would cease when the NSs actually merge several milliseconds later), but that the radio flux observed is consistent with known NS magnetic field strengths.  Finally, they also argue that the inferred rate of fast radio bursts is consistent with an optimistic, but still plausible, neutron star merger rate.  Several other theories have also been proposed to explain these bursts, including giant eruptions from soft-gamma repeaters and black hole evaporation. However, if they are due to NS mergers, then the rate they imply is good news for scientists hoping to detect gravitational waves from these systems when Advanced Ligo comes on-line in a few years.