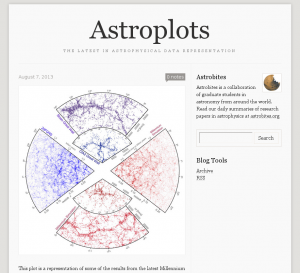 A screenshot of Astroplots, showing results from the Millennium Simulation.

Today Astrobites is launching a new project, a tumblr blog called Astroplots. You can visit or subscribe to Astroplots for brief updates on research in astrophysics, both historical and fresh off the (e-)presses.

The format of this new blog is a little different than the main Astrobites site. Instead of describing a full work in detail, Astroplots will feature one or two paragraph vignettes about particular figures and images from research papers.

These figures will generally be selected from different papers than the ones being covered on the Astrobites main site, so be sure to check both for a fuller window into the diversity of work being done in the field.

Do you have a favorite plot, image, or other figure that you would like to see highlighted on Astroplots? Let us know by leaving a comment below or sending us a tweet!

A special thanks goes to Angela Massey, a Boston University student and Astrobites reader who suggested that we explore new ways to highlight astrophysical data.