How to Drag an Asteroid to Earth

Asteroid mining is the sort of thing we normally hear about in the context of science fiction narratives or perhaps during vague discussions of humanity’s future. But, it turns out that the future might be closer than we think. In fact, the authors of today’s paper argue that with technology we already have, we could round up some small asteroids and put them in orbit near Earth, allowing us to scavenge its resources at our leisure. The materials could then be used for a variety of purposes in space, from use as a shield against deadly radiation to the manufacture of propellant. This would undoubtedly lead to a global “gold rush”, where companies scramble to exploit this untapped resource. In fact, as the authors point out, some big-name investors are already lined up to begin mining as soon as it is possible through a group called Planetary Resources. There is scientific bounty to be had as well. Asteroids are some of the oldest rocks in the solar system and could teach us of a time when our solar system was in its infancy, if only we could study them up close.

Throwing a lasso around an asteroid and dragging back to Earth requires enormous amounts of energy and is traditionally considered unfeasible with current technologies. However, recent developments in orbital dynamics have revealed that you don’t need a rocket to do all the work. Instead, we can let gravity do most of the work for us. The process involves sending a spacecraft to a nearby asteroid—known as a Near-Earth Object (NEO)—and somehow nudging its orbit such that the asteroid “falls” into an orbit around a Lagrange point. 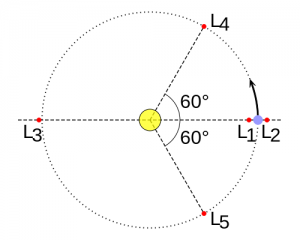 Lagrange points of an orbital two-body system. A relatively-small third body will remain stationary relative to the other two if placed at any of the five Lagrange points. Source: Wikimedia Commons.

Lagrange points are an artifact of the three-body problem. If two massive objects—like the Sun and Earth for example—are orbiting each other, a third object of relatively small mass can be placed at one of five locations where its location will be stationary relative to the two large bodies. These five locations are the Lagrange Points and represent regions in space where the gravitational pull of the two bodies essentially cancel each other out. The diagram on the left shows the relative location of the points. It is around one of these points, preferably the L1 or L2 point, that the captured asteroids could orbit.

These points are theoretically stable in that an object placed exactly at one of them will remain there indefinitely. However, the three-body interaction is chaotic: slight deviations in the asteroids orbit could send it flying away from or, worse, towards Earth. Periodic minor corrections to the asteroid’s orbit would be required to keep it in place and is routinely performed for satellites that reside at the Lagrange points. Manipulating the asteroids’ orbits before they arrive at a Lagrange point is a little more tricky, but technologically feasible. Some ideas currently available include a massive probe that tugs the asteroid along via gravitational attraction and a small impactor that bumps the asteroid during impact. The traditional “rocket-with-a-lasso” approach may be possible as well for sufficiently small asteroids. 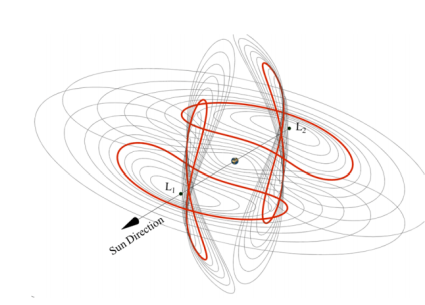 To demonstrate that this idea is really possible, the authors scoured a database of NEOs maintained by NASA’s Jet Propulsion Laboratory and found twelve asteroids whose orbital velocities need to be changed by less than 500 m/s in order to move it into orbit around the L1 or L2 point near Earth. They call these asteroids Easily Retrievable Objects (ERO’s). The ERO with the lowest energy cost is 2006 RH120. It only requires a 58 m/s change to its orbital velocity—achievable by an orbital adjustment on 1 February 2021—to end up in orbit near Earth. For comparison, the Apollo astronauts needed an orbital velocity boost of roughly 3 km/s to move from orbit around Earth to orbit around the Moon.

The authors also mention the potential for accidents (e.g. the extinction of life on Earth due to asteroid impact). They claim that the orbits would need to be controlled so that if they do start drifting away from their intended spot, they do so away from Earth and not towards it. They also point out that many of the ERO’s out there are very small, and in many cases their impact would resemble those that happen already every one to three years already, and would likely not disrupt life on Earth in a widespread way.

According to the authors, we have the technology and physical know-how required to drag an asteroid close to Earth. We also have a small-but-growing database of eligible objects, complete with the required capture dates. All that seems to be missing is financing and a few policy decisions. Let the “gold rush” begin!