The astrophysicist goes to the concert hall. Beethoven, the flyer from the Chicago Symphony Orchestra said. Music is how he unwinds after a long day, working on those galaxy clusters. He is running late, but excited. Once there, he hurriedly takes a seat, closes his eyes and lets the orchestra weave a spell. He likes the cello, and focusses his ears to the instrument and the player. A few minutes in, and not only does he know from the cellist’s music that he’s listening to the second movement in the symphony, but he also has the name locked down: Beethoven’s Symphony No. 6. A classic-al example of small-scale information paving the way to understand large scale phenomena. Exactly what the astrophysicist does for a living. 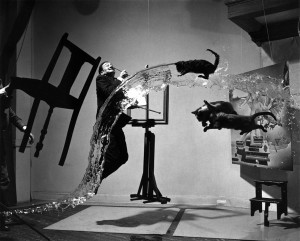 Fig.1 : A conversation with a friend convinced me that Dali Atomicus (1948) reminded us of the climax in a symphony piece. Each element of the photograph (the large scale structure) provides information about the ensemble (the universe).

Excruciating musical analogies aside, on the stage of the universe, galaxy clusters are fairly new players. Using them as probes of cosmology (the study of the origin and evolution of the universe as a whole) on the scale of billions of years is akin to the events of the concert hall. As the 20th century came to an end, several astrophysicists had identified multiple channels of studying the universe – the ever popular Cosmic Microwave Background (CMB, the thermal radiation from the era of recombination near the big bang), Baryon Acoustic Oscillations (BAOs, the fluctuations in density of ordinary matter in the universe), extremely distant Type Ia Supernovae and the likes. These were used extensively to put physical constraints on parameters that are considered standard in cosmology :

With the advent of better telescopes and large-scale sky surveys, it became imperative to detect more and different kinds of astrophysical objects. These observations would lead us in the direction of the right model of the universe, which would help us understand how initial perturbations in the early universe would eventually lead to the structure that we see today. Using observations of the Sunyaev-Zel’dovich effect (the scattering of CMB photons off hot plasma) and X-ray-emitting gas, we were able to detect several distant clusters of galaxies. This led to galaxy clusters being a fascinating candidate for an additional cosmological probe in the present universe, complimentary to universal phenomena like the CMB and BAOs arising from the very early universe. 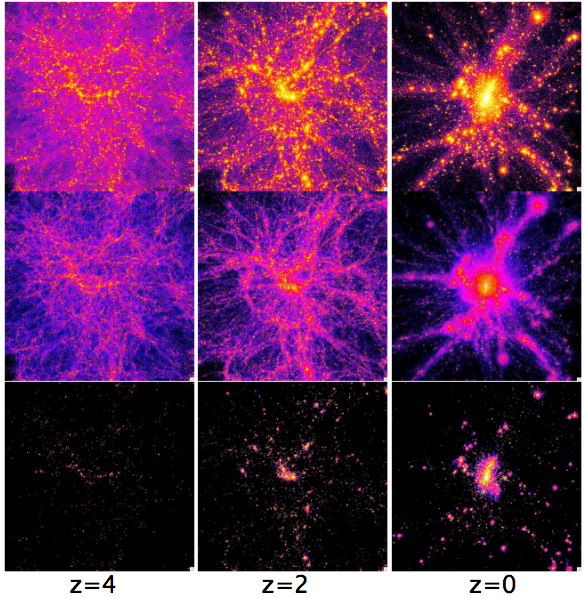 Paper II and III were some of the very first attempts at quantitatively measuring the perturbations in the matter density in the universe, and how the nature of dark energy and matter (both ordinary and dark) could alter the number and mass of galaxy clusters that we can see or will be able to see in the future. Paper I was a treatise on using the then future probes (which are very much a reality now, and a rousing success) to use galaxy clusters detected by the SZ-effect and X-ray emissions, and use statistical algorithms to measure the parameters that define our universe.

How is this done? Clusters form from some of the densest regions of the universe, when they collapse due to gravity. Hence the number density of clusters is very sensitive to Ωm (the density of ordinary and dark matter) and σ8 (the amount of fluctuation in matter density). Moreover, because the gravitational collapse is compensated by the expansion of the universe, the redshift distribution of this number density is important to put a constraint on ΩΛ. One of the most important features of Paper I’s treatment of cluster cosmology was using different masses of clusters in their formalism, to account for developing (~ 10 times the mass of the Milky Way) as well as evolved clusters (~ 1000 times the mass of the Milky Way). They were able to do this by assuming that once a cluster is on the verge of forming a stable object, its properties are scaled up or down while comparing with clusters of a higher or lower mass, respectively (refer to Figure 2). 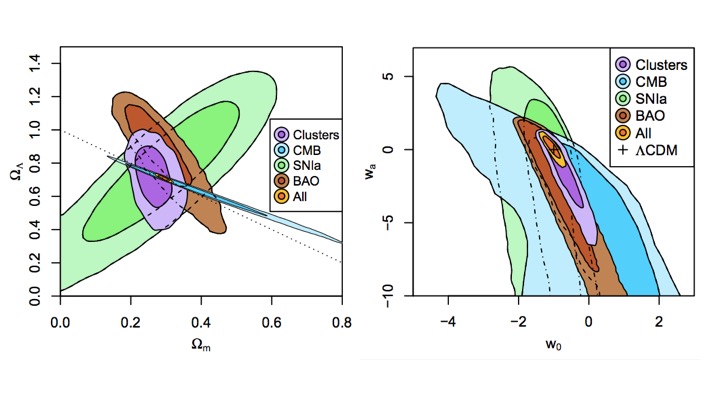 Fig. 3 : Left – 2014 results (from Mantz et al.) that put constraints on dark energy (y-axis) and total matter (x-axis). Cluster data is depicted with the purple ellipse, where the dark and light shading indicates 68% and 95% confidence with respect to errors in measurements. Right – w(a) represents different models of the universe, and a value of 0 depicts the existence of dark energy with a fixed cosmological constant Lambda (The + sign in the plot). This is the current accepted cosmological model of the physical universe.

We have come a long way between 2001 and now. SZ-capable telescopes like SPT, ACT and Planck, and X-ray observatories like Chandra and XMM-Newton have done a tremendous job of constraining these parameters (as shown in Figure 3). Future surveys like eROSITA and SPT-3G shall detect even fainter and more distant clusters to tighten these constraints. This probe of studying the physical cosmology of our universe shall not only eliminate non-conforming models, but bring out the strengths of other models.

The stage is set, the instruments are being improved, and the astrophysicist derives great pleasure in being an observer of the symphony being played on the scale of the universe.