Title: Constraints on the Architecture of the HD 95086 Planetary System with the Gemini Planet Imager

HD 95086 is one of the more well studied and characterized systems; it hosts planetary, planetesimal, and dust components, which make it quite the intriguing subject to study. Its planet HD 95086 b was directly imaged by GPI in late 2013; the planet is about 4 times the mass of Jupiter and orbits its star at a distance of about 56 AU. The disk in the system is characterized by three components— a 55 K cool component, a 75 K warm component at – each of those two corresponding to a planetesimal belt– and a possible hot component at 300 K, which could suggest activity in the habitable zone of the star (Su et al. 2015). There is also quite a large gap in HD 95086’s disk, extending from about 8 to 80 AU. This system presents a perfect playground for the study of evolution and formation of unusual systems. 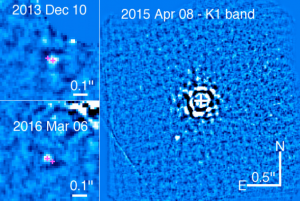 Figure 1: The direct images of HD 95086, taken over several epochs, are shown in this figure.

This paper focuses on constraining the orbit of HD 95086 b based on re-analyzation of old images in combination with their newer images. HD 95086 b was originally imaged in late 2013 (Galicher et al. 2014).  Overall, their images spanned four epochs, from December 2013 to March 2016, and provided astromteric measurements for HD 95086 b. From these measurements, the authors found that the orbit of HD 95086 b is face-on and circular. Examples of the direct imaging on the system are shown in Figure  1.

To constraint the orbit of HD 95086 b, the authors used Monte Carlo (MC) techniques that were more efficient than a traditional Markov Chain Monte Carlo. The technique generated parameters from a probability density function, then fit the parameters of the orbits through each epoch. The probability of the orbits generated was then evaluated by comparing the remaining epochs against a uniform random variable, and the orbits were then accepted or rejected by the program. In Figure 2, the generated orbits are shown with the data points. Using the constraints for planet b in the system, the researchers constrained the HD 95086 system as a whole. 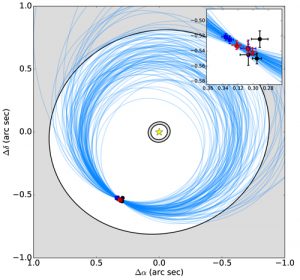 Figure 2: The model fitting for HD 95086, overlaid with the measurements, which are color coded by date taken, is shown in this image. The gray areas indicate the approximate location of the planetesimal belts in the system.

In an earlier publication, (Su et al. 2015), several possibilities for the system architecture were presented, and in this paper, these possibilities are explored with the new analysis of data. The authors rule out several scenarios and present the most likely scenarios from their models. The scenarios are as follows:

Certainly, these aren’t the only possibilities, but with the new analysis and data, the scenarios have been considerably confined. It is likely that HD 95086 has two massive planets that have sculpted out the gap in the disk, with one at a closer separation than is currently detectable by direct imaging. Another possibility is that three or four planets are present in the system, but their eccentricities and mass vary greatly, which could explain why they have not been detected by current observations.

In HD 95086, planets have clearly disrupted the disk and the planetesimals, but the exact nature of this contact remains unknown, though now these researchers have found that a two-planet system of moderate eccentricity or possibly an inhomogeneous mix of three or fours planets. The interactions between the planets and the disk can reveal so much about how these systems form and evolve. There’s still some mystery left in the HD 95086 system, but the scientific sleuths of this papers have thoroughly narrowed down the possibilities.