Getting a peek at exozodis

Title: Constraints on the structure of hot exozodiacal dust belts

The inner solar system contains a wispy, flared disk of dusty residue from comets and asteroid collisions, along with a bit of interstellar dust. This is zodiacal dust, which you can see with your naked eye. Zodiacal disk analogs are also known to exist around other stars and have attracted considerable interest ever since their first discovery in 2006. Known disks are dramatically different from the zodiacal disk, so they must depend on other physical mechanisms. Exozodis could also represent the greatest source of noise for future space-based missions to directly image exo-Earths. Before we ever get a picture of an exo-Earth, we need to advance our understanding of exozodis.

Single telescopes cannot currently firmly detect exozodis due to the combination of the faintness of the disk, the small angular sizes, and the colossal dust-star contrasts. For now, exozodis have to be detected interferometrically by using at least two telescopes. The sparse telescope sampling does not result in an image of the physical disk. It results in constructive and destructive fringes which encode information on angular scales that depend on the baseline between the telescopes.

Today’s paper asks, given the available data, what can we start saying about exozodi grain size and radial distribution? 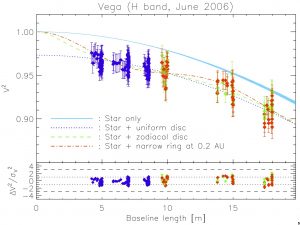 Fig. 1: Zodiacal dust around Vega appears as a decrement in the fringe contrast compared to that which would be expected from a simple star. However, more constraints are needed to determine the exozodi’s exact shape. Here, exozodis that take the form of a uniform disk, a copy of the solar system’s zodiacal disk, and a ring seem to fit the data equally well. (Fig. 4 in Defrère et al. 2011.)

Kirchschlager et al. focused on nine exozodis which have data at 8.5 microns (Far-InfraRed, FIR). This FIR data provides helpful constraints on the mineral composition of the disk, because silicates emit near those wavelengths.

The authors create a set of models consisting of spherical grains (1) of different sizes a, (2) filling different thin radial regions between R and 1.5R, (3) different orientations, and (4) six possible compositions. They try 100 different grain sizes spanning 0.001 to 10 microns, 100 different values of R spanning radii from 0.01 to 10 AU, 6 compositions, and 3 different orientations: a face-on disk, an edge-on flared disk, or a spherical shell. This totals 100 x 100 x 6 x 3 = 180,000 models for each of the nine exozodis! Finally, the total Mdust is derived from 2.2 micron (Near-InfRared, or NIR) flux levels.

This may seem like a crude set of models, but the authors note that the small amount of observational data does not warrant taking the models further. For each model, the authors calculate the simple ratio S of the fluxes in the near-, mid-, and far-infrared. They contend that if the far-infrared flux is underestimated, this could still be physically acceptable because dust may lie even further away from the host star. Therefore, a model is acceptable if the observed S is larger than the simulated S in the model.

Fig. 2. Results for three of the systems. Each square represents 100×100 = 10,000 models of each system. (Only face-on orientation and graphite compositions are shown.) Red regions are poor matches to the data, and blue regions are good. However, dust cannot exist within the sublimation radius. So the dashed blue area represents the most likely dust distribution. (Fig. 10 in today’s paper.) 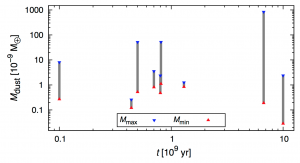 Fig. 3. Exozodi masses as a function of stellar age. This indicates that the physical mechanisms generating known exozodis are substantially different from those which generate the zodiacal disk. (Fig. 9 from today’s paper.)

The authors highlight which size grains are consistent with observations over a range of distances from each host star in Fig. 2. They find that the best-fit grain sizes are mostly sub-micron, and appear to be carbon-based dust. The disks are all closer in than the habitable zone, defined as the region with temperatures 210 to 320 K.

Most interestingly, the total masses of the disks show no clear pattern with stellar luminosity or age. The authors go through a list of possible mechanisms. The timescales of collision cascades are too short to make such bright disks appear so frequently or last so long in old systems. In addition, stellar radiation would cause ‘blow-out’ of grains, or cause them to spiral inward due to Poynting-Robertson drag.

The authors raise the possibility that nanometer-sized dust grains with higher sublimation temperatures (and thus different compositions) could exist close to the star and become charged via the photoelectric effect or stellar wind. Once the particles are charged–which can take less than a second–the star’s magnetic field can lock onto them and hold them in place.

Exciting times lie ahead for exozodi characterization. For systems that are more face-on, there will be less background and less noise. This will decrease exposure times and required telescope sizes. And, if exozodis do not extent out to the habitable zone like these ones, that could be good news of future exo-Earth imaging!