Back in 2013, the IceCube Collaboration published a paper announcing their discovery of astrophysical neutrinos, i.e. ones that have an origin outside our Solar System (Astrobites coverage).  Since this discovery, scientists have been busily working to develop theories as to the origin of these neutrinos. The original paper noted some clustering in the area of the center of our Galaxy, but it was not statistically significant. Since then, both Galactic and extragalactic origins have been proposed. Star-forming galaxies have been suggested as one possible origin, which Astrobites has covered papers arguing both for and against (here and here).  Other theories involve radio galaxies, transients, and dark matter.

In today’s paper, the IceCube Collaboration has analyzed more of their data and set limits on the percentage of the diffuse neutrino flux that can come from Galactic sources.  Theoretically, some neutrinos should be created in the Galactic plane: we know that this area emits gamma rays from pion decay, and neutrinos are created in the same types of interactions that create the gamma rays.

The collaboration used an unbinned maximum likelihood method as the main analysis technique in this paper. This is a standard technique used in astrophysics; it takes a model and finds the values of all the parameters of that model that give the best likelihood of getting the data that has been observed.  (A second, separate technique was used as a cross-check).  They used five different catalogs of Galactic sources expected to emit neutrinos to determine where to search.  Sources included pulsar wind nebulae and supernovae interacting with molecular clouds.  The upper limits on the flux from our galaxy can be seen below. 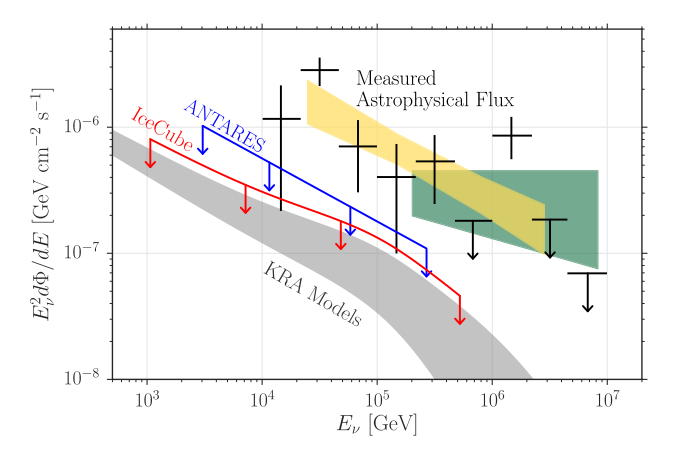 Figure 1: Upper limits on the neutrino flux from the Galaxy, assuming a three-flavor neutrino flux and a certain emission model  known as the KRA-gamma model.  The red limits are from this paper (with the grey showing how the limits change if other emission models are used); the blue are from ANTARES, which is another neutrino experiment.  For comparison, the measured overall neutrino flux is also shown (black data points and the yellow band). The green band is from the data, but only data from the northern sky is used.  IceCube is more sensitive in the Northern hemisphere. (Source: Figure 2 of the paper)

It turns out that, under these assumptions, Galactic contributions can’t be more than 14% of the diffuse neutrino flux. However, the authors note that there are still scenarios where the flux could originate in/near the Galaxy.  This paper focused on emission in the Galactic plane, but cosmic ray interactions in a gas halo far from the plane, and/or dark matter annihilation or decay would change the emission templates that were used here.  They also mention that the limits could be made stronger by doing a joint analysis with ANTARES.  Since IceCube and ANATARES are located in different hemispheres, they are most sensitive in different areas of the sky.  The mystery continues…