Disclaimer: This paper was covered in a previous astrobite by Mia de los Reyes.

Today’s paper is about the discovery of G09 83808, a distant, dusty, and star-forming galaxy that might help us learn more about star formation in the early Universe.

Sub-millimetre galaxies are distant galaxies that are particularly bright at wavelengths just shorter than one millimetre (around the far infrared and microwave ranges). In this case, ‘distant’ means they’re found at a redshift greater than around 2. The light a galaxy emits at these long wavelengths comes mostly from hot dust, and so these galaxies tend to contain two things: a lot of dust, and something that heats the dust up. The heating mechanism is generally a high rate of star formation, which is often associated with mergers. A collision between two galaxies triggers a burst of star formation, resulting in the birth of many new stars. Young stellar populations include some short-lived, very hot stars which quickly supernova and release their energy into the dust and gas of the galaxy. It’s therefore thought that sub-millimetre galaxies may be the results of such mergers.

The class was first defined in the 90s, and there has been quite a bit of interest in these galaxies since, because of what they might tell us about the star formation history of the Universe. A significant number of sub-millimetre galaxies have been found in the redshift range 2 to 4 (meaning we see them as they looked around 10 to 12.5 billion years ago). Beyond that, their numbers seem to be scarcer. Only a handful of sub-millimetre galaxies have been found beyond redshift 5, and only 2 beyond redshift 6 (an age of 12.6 billion years or older).

There’s reason to think that those distant sub-millimetre galaxies — the ones beyond redshift 5 — may not be representative of the general population as it existed at those times. All those that we’ve found beyond redshift 5 have very high star formation rates — high enough to be unusual even in this class of star-forming galaxies. They are so-called ‘extreme starbursts’, which have star formation rates of more than 1000 solar masses per year, where several hundred is more typical for what we see in this class among sources closer than redshift 5. For comparison, the star formation rate of our galaxy is around 1 solar mass per year. 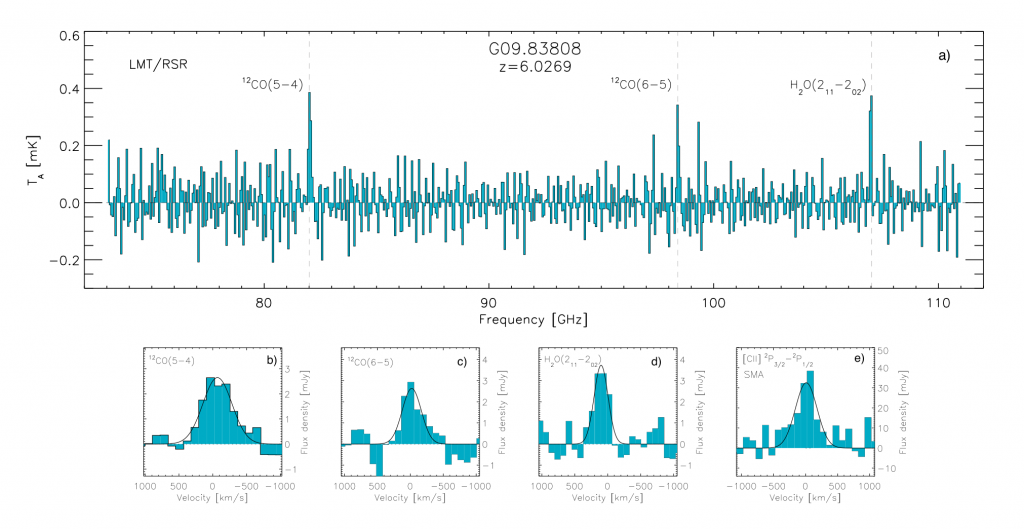 Figure 1:  Above: A spectrum of of G09 83808. Though the galaxy is faint, you can see several marked emission lines. Below: Fits to the individual lines at redshift 6.027. Figure 1 in the paper.

This is where the discovery announced in today’s paper comes in. The team have discovered another sub-millimetre galaxy called G09 83808. It is at redshift 6.03, as measured from the objects spectrum (Figure 1). This redshift means we see this galaxy as it looked 12.8 billion years ago, when the Universe was less than a billion years old.

The object is made more visible by some handy gravitational lensing. Gravitational lensing occurs when the gravity of a foreground object bends light around itself, focussing more of a background object’s light towards us than we would otherwise see. The result is that the background object that we are interested in appears larger on the sky, but distorted. In the case of G09 83808, a handy foreground galaxy inflates G09 83808 to cover an area 9x larger than we would otherwise see, increasing the total amount of light and making the galaxy easier to detect and study (Figure 2).

The team measured the temperature of the dust in G09 83808 by fitting a model spectrum to the flux of light from the galaxy at several wavelengths, and found it to be 50K. From this they estimated a star formation rate of around 380 solar masses per year. That rate is much lower than other sub-millimetre galaxies found at this redshift, but not unexpectedly so. 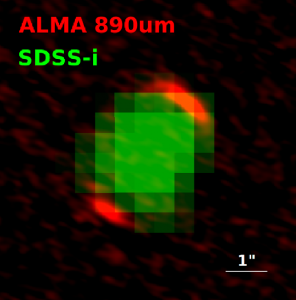 Figure 2:  Gravitational lensing of G09 83808. The red is emission from G09 83808 measured in a far infrared band, while the green is a foreground galaxy imaged in near infrared. You can see that G09 83808 is distorted into two ‘arcs’ appearing on either side of the foreground galaxy. Despite the distortion, the overall effect is to amplify the number of photons we see from G09 83808. Figure 2 in the paper.

The authors suggest that G09 83808 may be a better representation of what most sub-millimetre galaxies at redshift 6 are like. This would mean that the ‘extreme starburst’ galaxies that we’ve seen so far are just the brightest, and hence most visible, extreme of the population. It would be interesting to know, because it implies that the processes driving star formation haven’t changed all that much in the past 12.8 billion years. Naturally a larger sample is needed before we can know for sure, so, like all science, this is just a small step towards answering the big questions.