Forming Planetesimals in A Dust and Gas Vortex

Title: Probing the Cold Dust Emission in the AB Aur Disk: A Dust Trap in a Decaying Vortex?

Planet formation still holds many mysteries for today’s astronomers. One of the biggest unknown is how pebbles and dust clump together to form planetesimals  rather than drifting in towards the star due to its strong gravitational pull. A possible solution is dust traps—in a circumstellar disk, the pebbles and particles’ drift inwards can be stopped by high pressure in thegaseous disk. A dust trap like this would be an ideal place to form planetesimals. The authors of today’s paper look at a circumstellar disks around AB Aur . They create hydrodynamical simulations of the dust and gas to see if there is a dust trap with the possible formation of small planets.

Circumstellar disks are the link between bunches of dust around a star and fully formed planetesimals. There are a few types of circumstellar disks—protoplanetary, transition, and debris. A transition disk is exactly what it sounds like—a transition from protoplanetary to debris, which means that planets would likely be forming in a transition disk. About 145 parsecs away, AB Aur hosts a asymmetric transition disk. The unevenness of the disk could indicate a dust trap or gas vortex. At about 120 AU from the central star, the cold dust emission disk creates an asymmetric ring in the disk.

Figure 1: Observations of the continuum emission of AB Aur’s disk from NOEMA are shown in this figure.

The authors use NOEMA (NOrthern Extended Millimeter Array) to observe the dust’s continuum emission at 1.12 and 2.22 mm in the AB Aur. Their observations can be seen in Figure 1, and they show that the intensity varies throughout the emission ring, and the intensity decreases at higher wavlengths. The intensity variations that the authors observed are smaller at 2.22 mm than at 1.12 mm, which is the opposite of what purely theoretical dust trapping / gas vortex models predict. 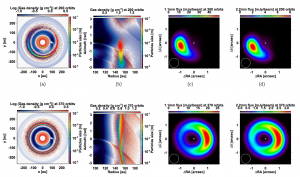 The authors then create their own model and use their hydrodynamical simulations for both gas and dust particles in the ring. From this, they are able to they reproduce the emission observed in the disk. Their results from the simulations can be seen in Figure 2. Their simulations show that the lopsided nature of the disk is explained if the gas vortex has started to decay due to turbulent diffusion, and dust particles are thus losing the azimuthal trapping on different timescales depending on their size. The authors constrain the size distribution from the comparison between the observations and simulations. They find that there is a mass of about 30 Earth masses, in the dust trap, which would be more than enough to form rocky planets.

The authors’ gas and dust simulations show a dust-trapping feature in the disk at about 96 AU. The vortex would need to be decaying as the planet formed in order to fully reproduce their observations, including the intensity varations along the ring. More observations and work are needed to fully understand the disk, but so far the authors’ simulations show that planets and planetesimals are likely currently forming in a dust trap around AB Aur.