Title: Wavelength Does Not Equal Pressure: Vertical Contribution Functions and Their Implications for Mapping Hot Jupiters

The phase curves of transit planets reveal the longitudinal (from day to night) variation. When observing with multiple-wavelengths, they further tell us the information in the radial direction. Different wavebands in principle probe different pressure depths in the atmosphere, since different wavelengths have different opacities (the ability to absorb and scatter photons). However, the opacity is determined by the local temperature, pressure, and gaseous composition, and there is no reason for the opacity to hold constant across the planet, as we will see later. In today’s paper, the authors address this important yet challenging issue when it comes to interpreting the multi-band phase curves.

Trends do not fit with one-dimensional models 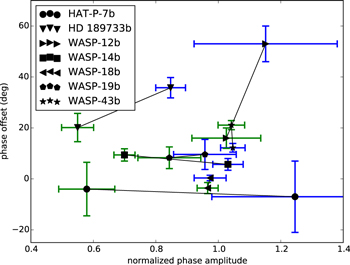 Figure 1 collects the data from seven hot Jupiters for which we have multi-band phase curve observations. The x-axis shows the normalized phase amplitude (the flux contrast of the dayside and nightside divided by that of the dayside). One can see that blue points (3.6 μm) are always to the right of green points (4.5 μm) for each planet, meaning 3.6 μm observations exhibit larger day-night contrast. According to the previous argument, we would naively expect the blue points to be to the upper left of the green points.

Predictions from a 3D Radiative-Dynamical Model

The authors explore these phenomena by running a radiative-hydrodynamic simulation of a hot Jupiter, HD 1890733b, assuming thermo-chemical equilibrium. Their model produces theoretical phase curves with greater relative phase amplitude and greater phase offset at 3.6 μm than at 4.5 μm, in agreement with the data. This demonstrates that the opacity cannot be simply presented by a 1D model. Instead, the photosphere can be a convoluted function of both longitude and wavelength, as shown in Figure 2. First of all, the day-night temperature contrast is truly decreasing with increasing pressure in general, as we expect. Looking at the photospheres in different wavebands, we find that a single waveband probes different pressures depending on the longitude. The contribution function (showing the vertical contribution to the emission flux) in the right panel shows a significant contribution at 4.5 μm from the upper, cooler regions on the dayside relative to 3.6 μm leads to a smaller phase amplitude. The result is that the effective photosphere in each band does not necessarily maintain its relative position as one moves around in longitude. 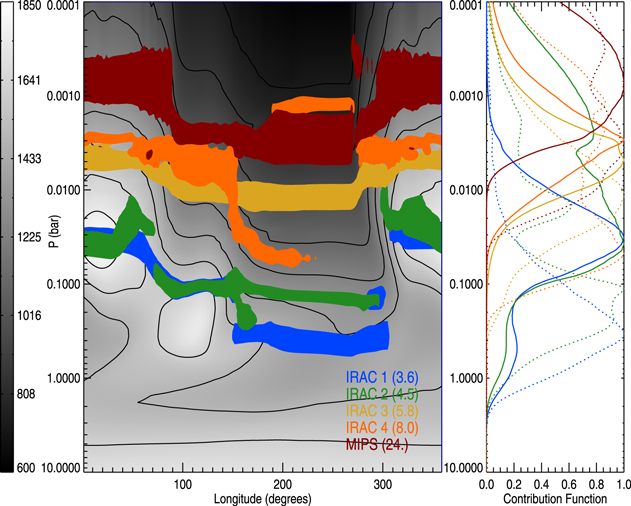 A further investigation to understand how the global opacity distribution changes is shown in Figure 3, where we can see the total opacity (the absorption of all the gaseous molecules) as a function of temperature and pressure. By following the same pressure across each of the plots, we can roughly visualize how the opacity changes along the longitude. Interestingly, the opacity at 4.5 μm increases when moving from night to day, while at 3.6 μm it decreases. This feature makes the effective photosphere at  4.5 μm higher on the dayside, where the atmosphere is cooler, and hence reduces the day-night contrast (phase amplitude). The behavior of opacity is due to the CH4-CO transition: CH4 is favored at lower temperatures and has strong absorption at 3.6 μm; CO is favored at higher temperatures and has strong absorption at 4.5 μm. Therefore, the photosphere at 3.6 μm can be higher than at 4.5 μm in the cool region. 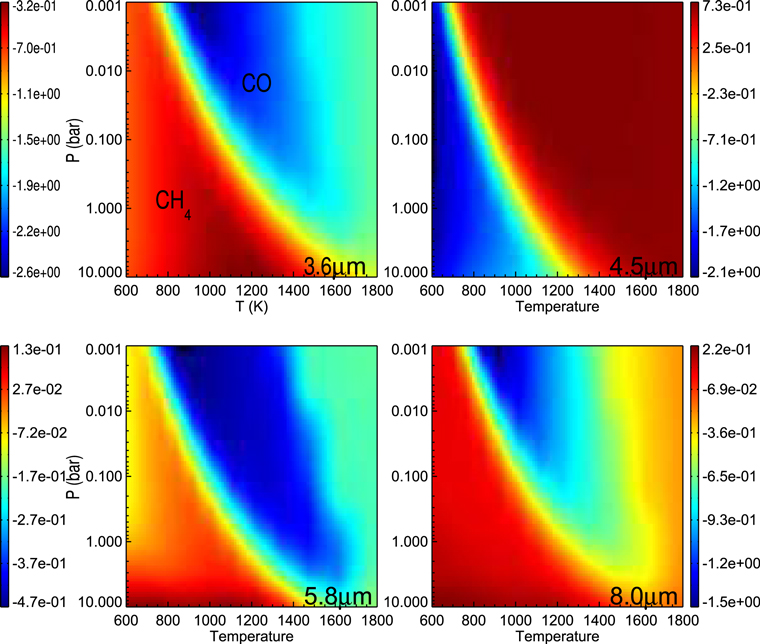 Figure 3. Log of the total opacity (in cm2 g-1) due to molecules (CH4, CO, H2O, and CO2) as a function of temperature and pressure at 3.6, 4.5, 5.8, and 8.0 μm. Thermo-chemical equilibrium is assumed at each temperature and pressure. The obvious feature running diagonally through all of the plots is the change in opacity as the dominant carbon-bearing molecule switches from CH4 in the lower left to CO in the upper right.

Unfortunately, the convoluted photospheres complicate the interpretation of multi-wavelength phase curves. In particular, the authors show that the classic 1D assumption that different wavelengths probe different pressure layers is incorrect: it is true only at one longitude, but the order of the layers changes from one location to another. This is a complication worth tackling soon in order to construct multi-dimensional maps of hot Jupiters.