The field is fast radio bursts (FRBs) is one of the most fast-paced fields of astronomy at the moment, and these mysterious bursts continue to captivate and puzzle scientists all over the world. Powerful new telescopes equipped with advanced technology are coming online, which will enable astronomers to understand the inner workings of these mysterious objects.  The first major breakthrough in the field was the discovery and localization of a repeating FRB. Now a team of astronomers has made a new discovery that could turn the theories of why and how FRBs happen on their heads.

The Current Status of Our FRB Knowledge

Fast radio bursts are short, intense bursts of radiation that occur on the timescale of milliseconds. First discovered by Duncan Lorimer in 2007, these objects continue to surprise scientists. When they were first detected, the dispersion measure (DM), which measures how much stuff is between us and a source, only told them that the object was outside of our galaxy. Later came the repeating fast radio burst discovery. The fact that it repeated allowed scientists to pinpoint its origin and they discovered that it sits in a luminous radio nebula within a dwarf galaxy that has a high star formation rate. This led astronomers to believe that FRBs could possibly come from magnetars embedded in pulsar wind nebulae, or in extreme environments in general. Because of how the telescopes work, most FRBs are impossible to localize unless they are seen to repeat, but one array in the southern hemisphere has defied that notion.

The Australian Square Kilometer Array Pathfinder (ASKAP) is a 36-antenna radio interferometer located in western Australia. Using antennas pointed in the same direction (which enabled the array to act as an interferometer capable of localization), ASKAP searched high galactic latitudes and detected a burst which they called FRB 180924 (see Figure 1). Two teams separately analyzed the data and derived the same position, to a precision of 100 milliarcseconds, which is incredibly precise for an extragalactic burst. In order to identify a host galaxy, the team needed to use both radio and optical data. By combining archival observations from the Dark Energy Survey with deeper images obtained from the Very Large Telescope and spectra from the Keck II and Gemini South telescopes, the source was found to be located close to the center of galaxy DES J214425.25-40540081 (see Figure 2) but slightly offset. This galaxy is a massive lenticular or early-type spiral galaxy (dominated by an old stellar population) and has a total stellar mass of 2.2 x 1010 solar masses. It has a redshift of 0.3214 which indicates that it is about 3.6 billion light years away. It has properties consistent with LINER galaxies, which contain nuclei with spectral line emission and also shows interstellar dust. The team followed up the discovery with the Parkes radio telescope for a total of 9 hours starting 8 days post-burst and a further 2 hours 23 days post-burst, finding no evidence of repeating pulses.

Comparison to the Repeater and Its Host

The properties of this new burst and its host galaxy are very different from those of the repeater and its host. While the repeater came from a dwarf galaxy with low mass, low metallicity, and high star formation rate (the kind that frequently hosts superluminous supernovae and gamma-ray bursts), FRB 180924 comes from an early-type spiral that is 30x more luminous and has a negligible star formation rate. The burst environments are also very different; the repeater resides in a radio nebula containing highly magnetized, dynamic plasma and the source is co-located with a bright compact radio source, while the new FRB shows no evidence of being an environment containing magnetized plasma and is not located near a persistent radio source. These differences suggest that either there are two populations of burst progenitors or that the progenitors can occur in diverse environments.

FRBs as Probes of the Interstellar and Intergalactic Medium

The discovery and localization of this new fast radio burst represents huge steps toward unlocking the mystery of these signals. Because single bursts occur roughly 30x more often than repeaters, telescopes like ASKAP will allow us to increase our sample size of localized FRBs. The fact that the burst came from a massive galaxy with a low star formation rate points to the fact that either FRBs come from different sources or there exist two distinct populations of FRBs. With new instruments coming online, we are discovering more bursts every day and slowly moving toward solving the puzzle of FRBs. 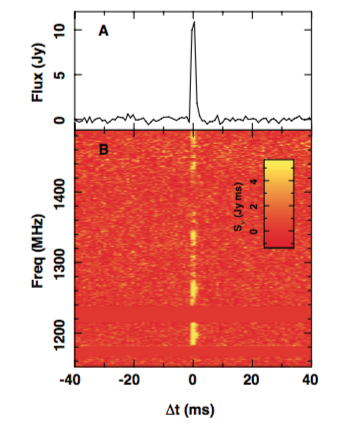 Figure 1: The integrated pulse profile (top) and the burst discovery dynamic spectrum, which shows the intensity of the pulse at different frequencies (bottom). 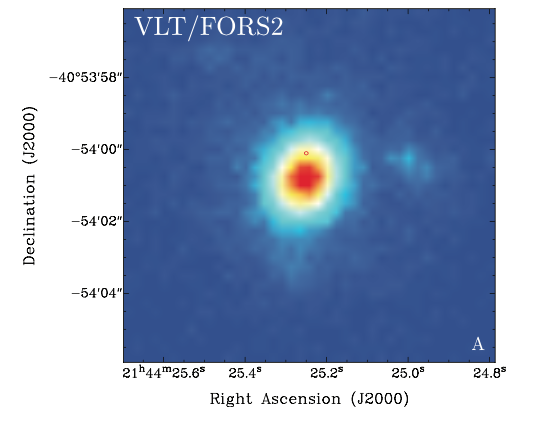 Figure 2: The Very Large Telescope burst location in the host galaxy. The uncertainty is shown by the red circle.

The CHIME is now for Fast Radio Bursts