It has long been understood that a connection exists between galaxies and the supermassive black holes (SMBHs) that exist at their centres. Gas from the host galaxy finds its way into the centre where it is consumed by the black hole. The sated black hole then bathes the host galaxy in huge amounts of radiation that can be detected across the electromagnetic spectrum, a phenomenon known as an active galactic nucleus (AGN). The difficult question is: how does the gas find its way into the centre and what effects might this have on the host galaxy? The well-cited Alexander & Hickox (2012) paper suggests that these AGN are fuelled mainly by mergers between galaxies and is outlined in figure 1.

The central AGN is believed to have a somewhat violent birth: two gas rich galaxies, initially separate (figure 1; stage 1) begin to merge (figure 1; stage 2) allowing gas to find its way into the centre and igniting the low luminosity AGN. As more gas reaches the centre, the AGN enters a more active ‘adolescent’ phase becoming more luminous and producing huge outflows of material (figure 1; stage 3), however, gas and dust forms around the AGN, obscuring it and making the galaxy appear red. The huge outflows from the AGN eventually blow away the obscuring material unleashing its full intensity (figure 1; stage 4) and making the host galaxy appear blue. Assuming there is no more interaction, the inflowing gas will eventually be used up and the AGN switches off, leaving behind a quiet, quiescent older galaxy (figure 1; stage 5).

Figure 1: Merger-driven evolutionary model of the AGN and host galaxy; AGN activity is indicated by the star shape. Adapted from figure 6 of Alexander & Hickox (2012).

Today’s authors studied a sample of obscured quasars in this so-called ‘adolescent’ phase (figure 1; stage 3) to investigate whether AGN and their host galaxies will always follow this evolutionary path. To accomplish this the authors identified and imaged a sample of 10 FeLoBAL quasars at the lowest possible redshifts (0.6 < z < 1.1) using the Hubble Space Telescope (HST). FeLoBAL quasars are active galaxies described by broad absorption lines in their spectrum, particularly iron, indicating powerful outflows of material. A sample of 20 blue, unobscured quasars from the author’s previous work were used as a control sample. The aim was to characterise and compare the shapes of both samples of galaxies. Assuming this merger-driven theory is correct, the authors would expect an enhancement of merger signatures in the FeLoBAL quasar sample when compared to their unobscured counterparts as FeLoBAL quasars more recently experienced the initial merger event.

Figure 2 shows a selection of the FeLoBAL quasars taken using the HST. The AGN at the centres of the FeLoBAL quasars produce large amounts of central emission which can be clearly seen dominating the images in the left-hand panel of figure 2. The authors were interested in analysing the shape of the FeLoBAL quasars’ outer regions which meant this central emission had to be removed. The middle column of figure 2 shows their efforts to model observations of this central emission alone so that it could be removed from the left-hand image. However, given this emission is so luminous removing this left the remaining regions in some of the quasars extremely difficult to analyse. Despite this, the host galaxy shape is shown in the right-hand column of figure 2. Alongside this, is a letter signifying the extent of their merging behaviour from N (Undisturbed) through D (Disturbed) to M (Merger) classified by eye. There was a fourth category, X, representing those galaxies which didn’t have enough information left after the removal of the central emission to be properly classified. 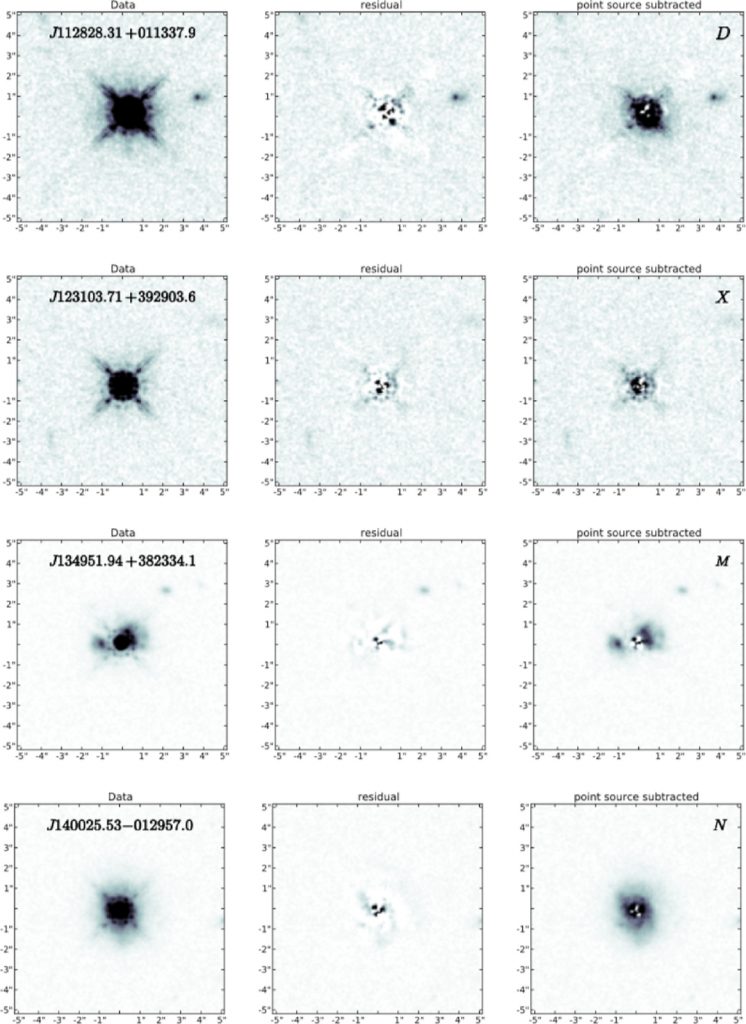 Figure 2: A selection of the FeLoBAL images used in this study. The left-hand column shows the unedited image dominated by emission from the central AGN. The central column shows attempts to model the observation of solely this central AGN emission. The right-hand column the data from the central column removed from it allowing the outer regions to be observed. Alongside it is a morphological classification (N: Undisturbed; D: Disturbed; M: Merger; X: No Classification Possible). Adapted from figure 3 in today’s paper.

The results from the visual classifications of the FeLoBALs and blue quasars are presented in figure 3. In the left-hand panel we see that there is very little difference in the ‘Disturbed’ or ‘Merger’ fraction between the FeLoBAL quasars discussed and the unobscured quasar populations. They then decide to remove the 5 FeLoBALs and blue quasars adversely affected by removing the central emission (classified as ‘X’) and re-calculate the results. Removing the unclassified FeLoBALs and blue quasars from the sample shows a large increase in the ‘Disturbed’, ‘Merger’ and ‘D+M’ fractions for the FeLoBALs. By splitting up a small sample into further smaller groups will create an artificial increase in these fractions which will not accurately reflect the underlying population. Thus, FeLoBALs appear, on average, more disturbed than their unobscured counterparts. From this the authors conclude that there is no significant difference in the fraction of mergers between FeLoBAL and blue quasar populations, although a higher proportion of blue quasars are undisturbed. 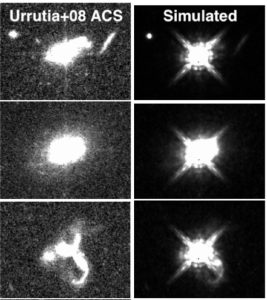 Since instrumental effects caused their sample to be halved, the authors performed a check on whether they could recover merger signatures without having to remove the central emission which plagued their images. Figure 4 shows a selection of extremely red quasars (a similar but distinct class of active galaxies) which were found to have a large merger fraction, in contrast to the authors’ FeLoBAL sample. The authors recreated the imaging conditions under which their data was recorded and applied them to the extremely red quasar image sample. As can be seen from the right-hand column of figure 4, merger signatures can be seen even with this central emission dominating the image. This adds further evidence to the idea shown in left-hand panel of figure 3 that their FeLoBAL sample is not dominated by mergers.

Today’s paper has attempted to find signatures of mergers in a sample of red quasars with large outflows in a so-called ‘adolescent’ phase of the evolutionary track. Analysis of FeLoBAL quasar morphology has shown very little sign of merger activity. Furthermore, when compared to a later stage of evolution very little difference was found. Thus, the paper adds to a growing body of evidence that says mergers may not play as significant a role in the feeding of AGN and evolution of the host galaxy as previously thought. Future studies will require much larger samples to confirm if these results are statistically significant.