Around Half of Sun-Like Stars Could Host Potentially Habitable Worlds

When we look up on a clear night and contemplate the seemingly innumerable stars, it’s difficult not to wonder just how many other worlds like the Earth might be out there. In ancient times, long before the first unambiguous discovery of an extrasolar planet (a planet orbiting a star other than the Sun), it was believed there were essentially two possibilities, both put forward by philosophers during the Classical period in Ancient Greece: Aristotle (384-322 B.C.) declared “There cannot be more worlds than one”, while Epicurus (~460-370 B.C.) held the opposing view that “There are infinite worlds both like and unlike this world of ours”. Over two millennia later, and thanks to the painstaking work of countless generations of astronomers, we now know for sure which of these views is closer to the truth. Now, a team of astronomers led by Steve Bryson of NASA’s Ames Research Centre have taken us one step closer in our quest to discover other worlds like the Earth, using data obtained with the Kepler Space Telescope and Gaia mission. Their results suggest that around half of Sun-like stars in our galaxy might host rocky, potentially habitable planets within their habitable zones.

Figure 1: An illustration of the near-Earth-size exoplanet Kepler-452b, the first to be discovered residing in the habitable zone of a Sun-like star. Image credit: NASA Ames/JPL-Caltech/T. Pyle.

NASA’s Kepler Space Telescope was launched in 2009 and one of its primary missions was to discover rocky planets in or near the habitable zones of their host stars (roughly, the region where liquid water can exist on a planet’s surface), and to estimate the fraction of stars which might host such planets. During the nine and a half years over which it was active, Kepler detected 2,393 confirmed exoplanets around the 530,506 stars it observed, and for most of that time stared at a single patch of sky, only about the size of a hand at arm’s length. To detect planets, Kepler made use of the transit method, which relies on measuring the tiny dip in brightness that occurs when a planet passes in front of its host star as we view it from the Earth. As can be imagined, this dip in brightness is pretty small, about 1% for a giant exoplanet similar to Jupiter, and only about 0.1% for a rocky, Earth-like exoplanet. NASA retired the space telescope in 2018 after it ran out of fuel, but that hasn’t stopped astronomers from continuing to pour over the data and making new discoveries.

The number of potentially habitable planets per solar system in the Galaxy is a key term in the Drake equation, which is a probabilistic formula used to estimate the number of detectable civilisations residing within the Milky Way. None of the terms in the equation are known exactly, and most are only rough estimates based on observation. For this reason, much of the research carried out at The SETI Institute (The Search for Extraterrestrial Intelligence) focuses on finding reliable constraints for these terms.

Figure 2: An illustration of the various terms in the famous Drake equation. The number of potentially habitable planets per solar system is one of the key terms in the equation. Image credit: University of Rochester.

The team performed a detailed statistical analysis after combining the Kepler planet candidate catalogue with data from ESA’s Gaia mission. Previous studies that attempted to estimate similar planet occurrence rates have only considered the planet’s distance from the star, whilst this is the first study of its kind to consider the ‘instellation flux’, or the amount of energy falling on a planet from its host star. This was possible thanks to the inclusion of data from Gaia, which was designed to construct an ultra-precise 3D map of the positions and motions of stars in the Milky Way, and also provide information on stellar properties – such as their luminosity and effective temperature. This allowed the researchers to carry out their analysis in an entirely new way that was more representative of the actual diversity of host stars in our galaxy.

The researchers then estimated the occurrence rates using a range of models, stellar populations and computation methods. They limited their analysis to exoplanets similar in size to the Earth and therefore likely to be rocky (radii between 0.5 to 1.5 times that of the Earth), and stars with a similar age and temperature to the Sun (between about 4800 K and 6300 K). They also considered two scenarios using either a conservative or optimistic definition of the inner and outer habitable zone boundaries. 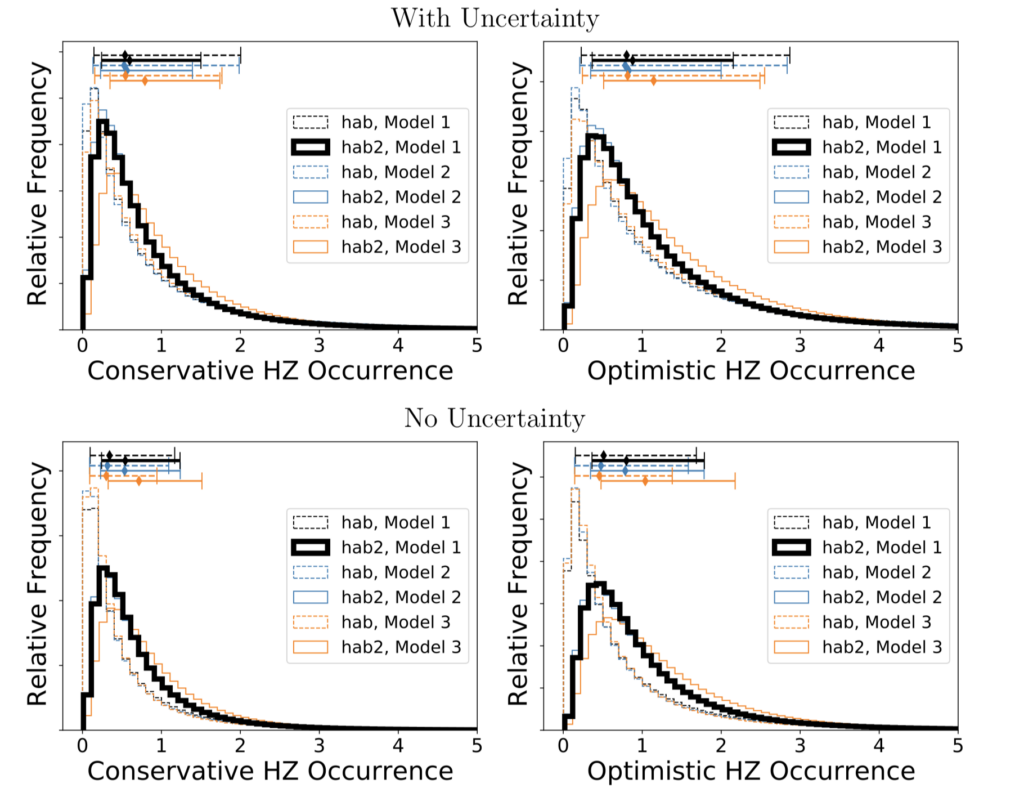 Figure 3: The resulting distributions of the habitable zone occurrence rate for a range of models and stellar populations. The medians and 68% credible intervals are shown above the distributions. The top panels incorporate uncertainties on planet radius, stellar instellation and stellar effective temperature whilst the bottom panels do not incorporate these uncertainties. Left: the conservative habitable zone. Right: the optimistic habitable zone. The plots show how very similar results were obtained for models 1 and 2 for both stellar populations. Figure 12 in the paper.

From their analysis, the team estimates that the average number of planets per star with a planet radius between 0.5 and 1.5 Earth radii, and within the star’s habitable zone, is between 0.37 and 0.60 for the conservative habitable zone. For the optimistic habitable zone they estimated between 0.58 and 0.88 planets per star. This means that, even using the most conservative estimate, there could be as many as 300 million potentially habitable planets in our galaxy and most likely many more! They also showed that there are likely to be at least four potentially habitable planets within about 30 light-years of the Sun, and the closest is likely to be at most about 20 light-years away.

Although the team carried out a very careful analysis of the data, the uncertainties on their estimates are still quite large due to the small number of rocky planets actually detected by Kepler. Future work will likely help to refine these estimates even further. Knowing just how common different types of exoplanets are could help guide the design of future space missions searching for potentially habitable exoplanets.