Title: When the Moon had a magnetosphere

The Earth’s magnetic field extends tens of thousands of kilometres out into space, forming a protective barrier which shields our fragile atmosphere from the solar wind – a stream of charged particles emanating from the Sun’s upper atmosphere. But what is less commonly known is that the Moon, the Earth’s only natural satellite, once possessed a magnetic field of its own. Now, a new study led by Dr. James Green, chief scientist at NASA’s Headquarters in Washington, DC, has shown that this ancient lunar magnetic field may have helped protect the early Earth’s atmosphere from being stripped away by intense radiation from a young and much more active Sun. 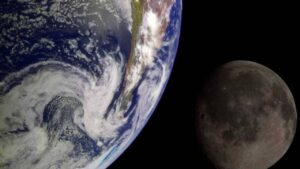 Figure 1: A composite image of the Earth and Moon captured by the Galileo spacecraft in 1992 whilst en route to the Jupiter system. Billions of years ago, the Moon generated its own magnetic field which may have helped to protect the Earth’s atmosphere. Image credit: NASA/JPL/USGS

Around four and a half billion years ago, the Earth formed from the accretion of fragments of debris and dust left over from the birth of the Sun. As a result of its formation, our home planet would have resembled a literal hellscape (this was the appropriately named Hadean eon – after the underworld of Greek mythology), with scorching temperatures and frequent volcanic activity transforming the surface. The Earth’s early atmosphere, consisting of gases from the solar nebula (mostly hydrogen) and products of outgassing (mostly nitrogen and carbon dioxide), was in danger of being blasted away by the intense solar wind, frequent flares and coronal mass ejections from the young Sun, with devastating consequences for the emergence of life on Earth.

At some point during this period, leading theories suggest that a titanic collision occurred between the proto-Earth and another roughly Mars-sized body named Theia, with some of the remnants from this collision clumping together to eventually form the Moon (this is known as the giant-impact hypothesis). At this time the Moon would have been located about three times closer to the Earth than it currently is today, and has been steadily moving away from us ever since due to the action of tidal forces (at a rate of about 1.5 inches or 3.8 cm per year). 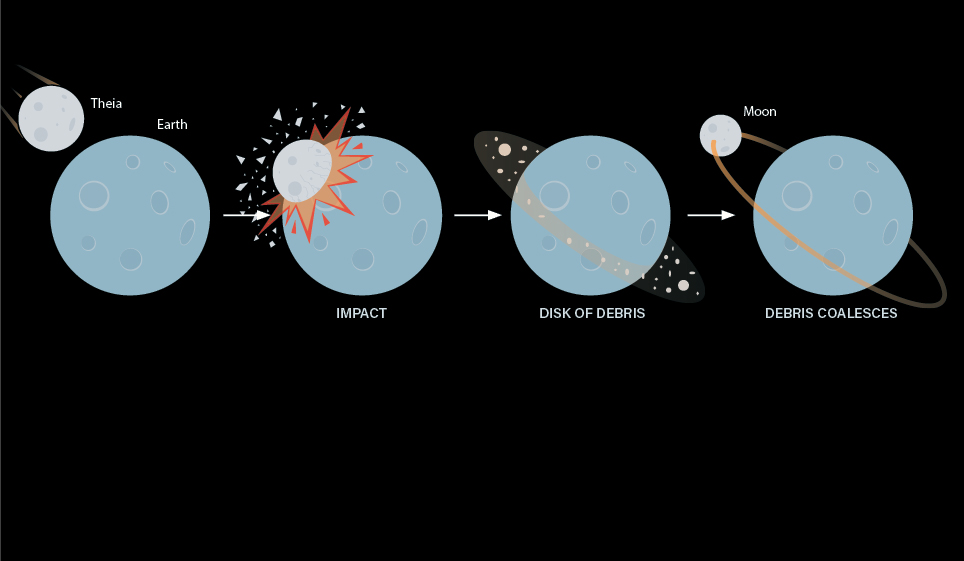 Figure 2: Cartoon showing the basic stages of the giant-impact hypothesis. A roughly Mars sized body collides with the young Earth and the debris from this collision eventually coalesces to form the Moon. Image credit: Jay Smith/Astronomy.

The Earth’s magnetic field is generated by electric currents which are produced from the motion of liquid iron and nickel in the outer core. Today, the Earth’s magnetic field is strong enough to deflect most of the charged particles emanating from the Sun (it can also deflect high-energy cosmic rays from outside the Solar System), but this might not have been the case soon after the Sun was born when its activity was believed to be more vigorous. Without a substantial magnetic field to protect it, a planet will quickly have its atmosphere stripped away by the intense solar wind. For instance, Mars has suffered an almost total loss of its once thick atmosphere after the dissipation of its own magnetic field some 4 billion years ago.

It has long been assumed that the Moon would not have been able to generate a significant magnetic field of its own due to its relatively small core. However, recent evidence from rock samples collected and returned to Earth during NASA’s Apollo missions has shown that it did possess a substantial magnetic field between 4.2 and 3.4 billion years ago (Figure 3). 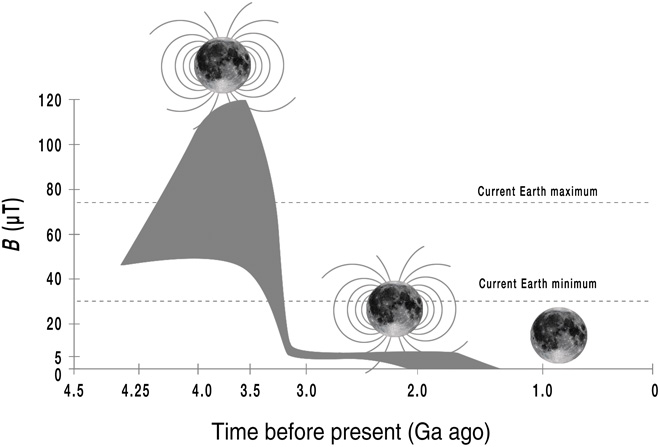 Figure 3: The magnetic field intensity of the Moon versus time as inferred from the Apollo lunar samples. Dashed lines show the surface minimum and maximum of the Earth’s current magnetic field for comparison. Figure 1 in the paper. Adapted from Mighani et al. (2020).

The team set out to model the early Moon’s magnetosphere (the region around an object dominated by its magnetic field) and how it might have interacted with that of the Earth’s when the Moon was at a distance of about 115,000 km, as it is believed to have been around 4 billion years ago. They were particularly interested in understanding how much protection the combined Earth-Moon magnetospheres might have offered to the atmospheres of both bodies from the harsh solar wind. They used the results of analysis of the Lunar samples to model the field intensity of the Moon’s dipole field, and examined the interaction of the Earth-Moon dipoles in two different configurations – one with the Moon between the Earth and the Sun, and the other with the Earth between the Moon and the Sun.

Figure 4: Simulation results for the Earth-Moon coupled magnetospheres with the Moon located at 18 Earth radii from the Earth in two different configurations. A shows how the Moon’s magnetosphere would effectively shield the Earth’s atmosphere from the brunt of the solar wind (flowing from left to right). Figure 2 in the paper.

The researchers found that during certain configurations the combined Earth-Moon magnetosphere would have formed a substantial and previously unrecognised barrier which could have effectively sheltered the early Earth’s atmosphere from solar wind erosion, reducing the rate of atmospheric loss to space. The team also found that the coupling of the two magnetic fields may actually have led to some exchange of material between the two bodies, as charged particles in the Earth’s atmosphere were able to travel via field lines to the Moon’s surface. This process may have contributed to the Moon having a thin atmosphere during this period. As the Moon’s core cooled, eventually its magnetic field died and its tenuous atmosphere was lost to space.

The team’s findings could have interesting implications beyond the Solar System too. Many exoplanets (planets orbiting stars other than the Sun) have now been detected orbiting nearby red dwarf or M-type stars. These stars are known to be particularly active, which poses a problem for the potential habitability of any rocky planets residing within their habitable zones. If the team’s findings are correct, similar circumstances could help to protect the atmospheres on some of these distant worlds too, and even contribute to their ability to host life.

A Fresh Take on Our Moon’s Origin