How NASA chooses its missions (and how you can help)

Like any government body, the organizational structure of the National Aeronautics and Space Administration (NASA), and the means by which it gets things done, can seem obtuse. NASA is first divided into four mission directorates: Aeronautics Research, Human Exploration and Operations, Science, and Space Technology. The Science arm is then further split into four divisions: Astrophysics, Earth Science, Heliophysics, and Planetary Science. Each of these divisions has long-term science goals that are partly driven by their own Decadal Survey, organized by the National Research Council. These chunky documents are built around input from the scientific community (submitted as so-called white papers) to help review the state of the field and gauge interest in future mission targets, ultimately forming recommendations for the science NASA should pursue in the next decade. The Astronomy and Astrophysics decadal survey for the 2020s was just released this month, and the Planetary Science and Astrobiology decadal survey for 2023–2032 is currently in production.

NASA then has a variety of programs within which missions come about. A planetary science mission can either be selected among a competition of submitted proposals or directed from the administration itself. For missions that are selected from competition, the Discovery Program seeks “faster, better, cheaper” missions (<$450M not including launch costs or data analysis). Intended to be selected and launched in relatively quick succession, 16 Discovery-class missions have been selected since 1990, including Mars Pathfinder (carrying the first rover to Mars), MESSENGER (first Mercury orbiter), Dawn (first mission to orbit two extraterrestrial bodies), InSight (Mars seismometer), and soon Lucy, Psyche, and two Venus missions. New Frontiers is another program that selects missions from competition, but at a higher cost-cap (<$850M) than Discovery-class missions, with the aim of selecting two missions per decade. Selected missions so far include New Horizons (Pluto flyby), Juno (Jupiter orbiter), OSIRIS-REx (asteroid analysis and sample return), and Dragonfly (Titan rotorcraft).

To achieve its most expensive science goals, NASA carries out Large Strategic Science Missions (AKA Flagship missions), which are usually >$1B for planetary science. Such Flagship missions may now be organized under the Solar System Exploration Program. Rather than seeking competition, these missions are directed by NASA and are intended to accomplish the most high priority science goals while incurring the lowest risk. To lower the risk of a crashed spacecraft or the inability to answer its intended questions of study, these missions generally use well-tested, legacy technology and leave the more prototype instrumentation to the Discovery and New Frontiers programs. However, Flagship missions are able to carry many complementary instruments that significantly advance the study of their intended targets. 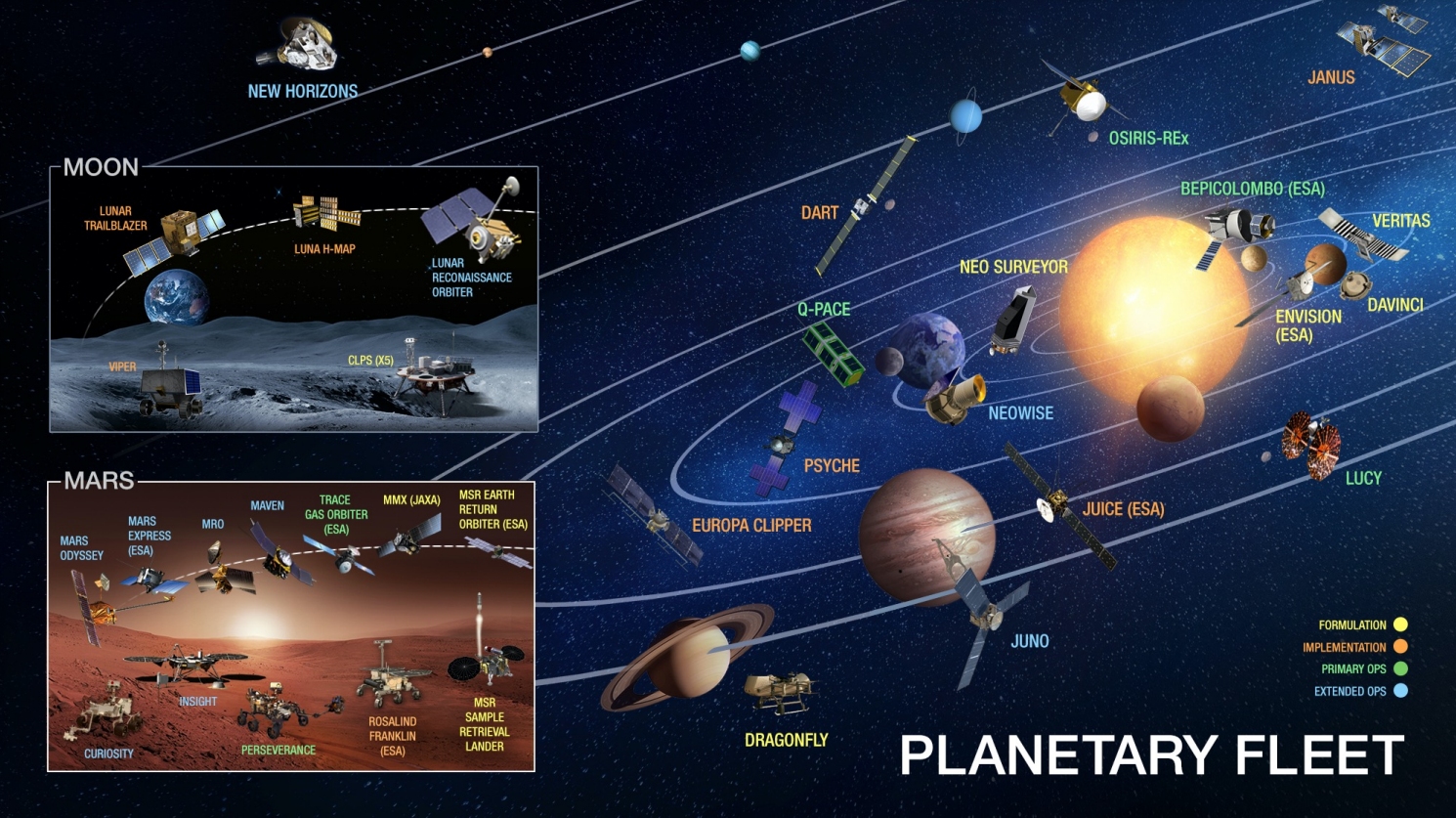 Figure 1: An example of the many planetary science missions NASA is involved with throughout the solar system. Similar fleet depictions can be found for missions within the Astrophysics, Heliophysics, and Earth Science divisions. Image sourced from the NASA Planetary Science Division.

For the Discovery and New Frontiers programs, NASA will give a list of potential science that it is currently interested in pursuing, and scientists and engineers will write mission proposals. As the planning of these proposed missions proceeds, proposers will often meet with groups at NASA research centers like the Jet Propulsion Laboratory to work out the overall mission architecture and details such as the orbital trajectory that could be used, if selected. To study the submitted mission proposals, NASA assembles panels of experts that work together to write a review of proposals in their field. Such review panels are also the way that NASA selects research proposals to fund an individual scientist’s research program. For many NASA programs, this review process is now becoming double-blind in an effort to reduce potential biases in selection (that is, the proposers and reviewers are both kept anonymous from each other). Reviews are then used by NASA administrators to rank proposals and ultimately decide which to fund.

In contrast, the top-down Flagship-class missions are typically assigned directly to a NASA research center. In these cases, there is then competition to select instrument teams from the broader community. Although NASA will have a wishlist of instruments for the mission (such as a camera, magnetometer, mass spectrometer, etc.), it again depends on the success of the proposing teams in arguing their case to bring their instrument onto the mission.

Besides these three main classes, NASA has also had many other mission-related programs, like those for funding innovative instrument development (PICASSO and MatISSE), small/cube satellites (like SIMPLEx), and entirely novel initiatives like Commercial Lunar Payload Services.

Although it’s a good way to end up with a Spacey McSpacecraft situation, NASA often seeks participation from the public by soliciting naming ideas and votes. If you’re a graduate student in astronomy or related fields, you can participate much more directly by applying to serve on review panels for any number of topics. Graduate students can sit on panels as Executive Secretaries — non-voting panel members who record notes on the discussion and help organize the panel’s thoughts. It’s a great way to get familiar with what reviewers expect from a scientific proposal, which can set you up for success in your own proposal writing. After selection by NASA, many missions now have opportunities for students to get involved in mission planning and related research, for example as part of the Dragonfly mission.

Although this post was focused on NASA, foreign organizations such as ESA, JAXA, CNSA, and many others may use very different selection methods. In many cases, NASA collaborates with other nations by constructing an instrument for one of their spacecraft and vice versa. Unfortunately, attempts to answer some of humanity’s greatest scientific questions are often constrained by tight government budgets and the politics of the day. Nonetheless, nations around the world continue to see the value of challenging ourselves to conduct space missions that rank among one of humanity’s most daunting projects, producing some truly inspiring international collaborations along the way.

The Nobel-Winning Discovery of 51 Pegasi b