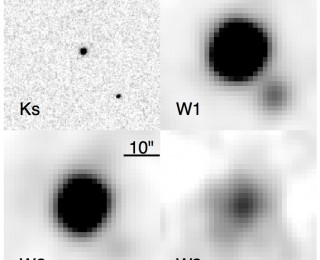 Astronomers like to find cool things. The first Earth-sized planet. The most distant galaxy yet. Two stars that merged while we watched. The coolness factor is certainly one reason why we keep at it – who wouldn’t want to be the first to find an Earth-sized planet, or the first human to see light from a galaxy that’s existed for billions of years? But there’s also a compelling scientific reason to search for these oddballs. This paper reports on the likely discovery of dust around a pair of binary stars.

It’s March 2, 1979. Two years ago, the Voyager spacecraft were launched on trajectories that will allow them to carry out their primary missions: the study of the outer Solar System, in particular Jupiter and Saturn. It’s just three days before Voyager 1’s closest approach to Jupiter. The paper that was published on March 2nd, 1979 in Science is a prediction for what the Voyager spacecraft might see on Io based on the orbital motions of these three satellites. 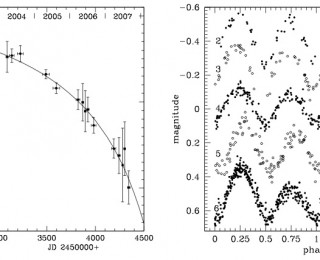 V1309 Sco first caught astronomers attention in 2008, when it displayed an outburst, suddenly getting a hundred times brighter. Due its location near the Galactic center, V1309 Sco has been monitored by the OGLE, which is looking for microlensing events, since 2001. The authors of this paper were able to look back into this archive of data and see what V1309 Sco was doing before it erupted. 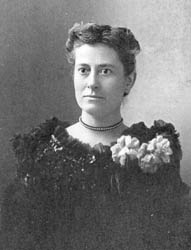 A patch of sky on the outskirts of Andromeda was observed for 7.5 hours with the Hubble space telescope, in which they found 630 RR Lyraes. 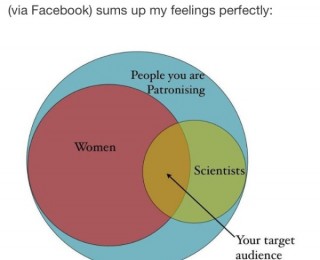 On Friday, many other scientists and I, both male and female, spent our mornings getting angry at a youtube video. The video in question, entitled “Science: It’s a Girl Thing,” was the launch video for an EU campaign to get more young women interested in science. It was posted Thursday and taken down Saturday due to the furor that erupted within the first twenty-four hours of its release.The video was mirrored, so if you haven’t seen it already, why not spend 53 seconds getting up to speed: The goal of the video is to appeal to young women and show that science isn’t solely the purview of old men in lab coats. The reason for the negative reactions is that it tries to combat stereotypes with an equally damaging stereotype: being a woman is the same thing as powder brushes and strutting around in high heels. And even though the commission took the video down, the pink lipstick writing (with the “i” in science replaced with a lipstick tube) remains on the commission’s website. (Remind me: what does pink lipstick have to do with science?)There have been many excellent responses (not to mention the active twitter hashtag #sciencegirlthing) so my goal here is not to reiterate the arguments and reactions of so many, but to collect those that I’ve found particularly interesting.In my initial google searches, I came across two other Science: It’s a Girl Thing! campaigns that look interesting. The Educational Equity Center has a collection of science activities for young children, which are free to download from their website. Texas Tech, through its IDEAL outreach program, has...
« Older Entries
Next Entries »