Galaxies come in many different flavors, therefore models of galaxy formation and evolution must reconcile theory with what we observe. The issue addressed in this paper is that current semi-analytic models over predict the fraction of late-type satellite galaxies that are passive (not forming stars). The authors implement new methods in their models for dealing with two different physical processes. The first is how cold, star-forming gas is stripped from these galaxies. The second, stellar mass loss, is how stars blow out cold gas that could go back into star formation.

The treatments of gas stripping and stellar mass loss presented increase the fraction of star-forming, late-type satellite galaxies, but models still under predict the fraction of active small galaxies in massive halos (dense environments). The authors also conclude that stellar mass-loss is a negligible effect and that their treatment of the gas stripping resolves the issue for certain environments. 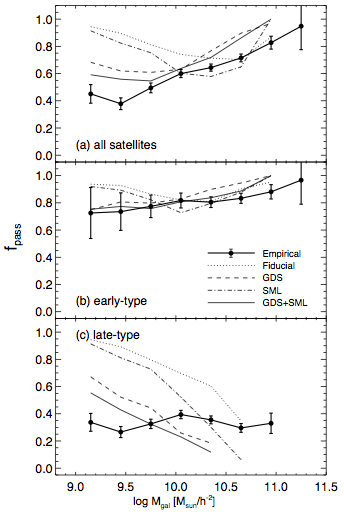 Figure 4 shows the fraction of passive galaxies as a function of galaxy mass for passive, active, and all satellite galaxies. The empirical data (thick bold line) has a smaller passive fraction for late-type galaxies but adding gas stripping (GDS) and stellar mass loss (SML) improves the agreement between the models and the data.

Semi-analytic models allow extremely complicated physics, such as stellar mass-loss and gas loss, to be implemented into simulations. In an attempt to accurately represent stellar mass-loss without modeling individual stars, the code uses the stellar mass-weighted age as a proxy for specific stellar mass-loss rates. That is,  larger, younger stars will quickly spit back more gas than older, small stars.

The stripping of the cold gas is treated as a gradual process over the course of a merger event. This prescription uses the distance where a particle’s motion is governed by the satellite galaxy to delineate whether gas is removed. This radius for the satellite galaxy will change over time, gradually removing the gas from the satellite galaxy. These analytic models allow a treatment of the gas and its effects on complicated processes such as star-formation without using an expensive hydrodynamic code.

This paper shows that stellar mass loss and environmental effects can partially reproduce star-formation rates in satellite galaxies. However, the discrepancy in the predicted passive fraction for the most massive halos is still unresolved.