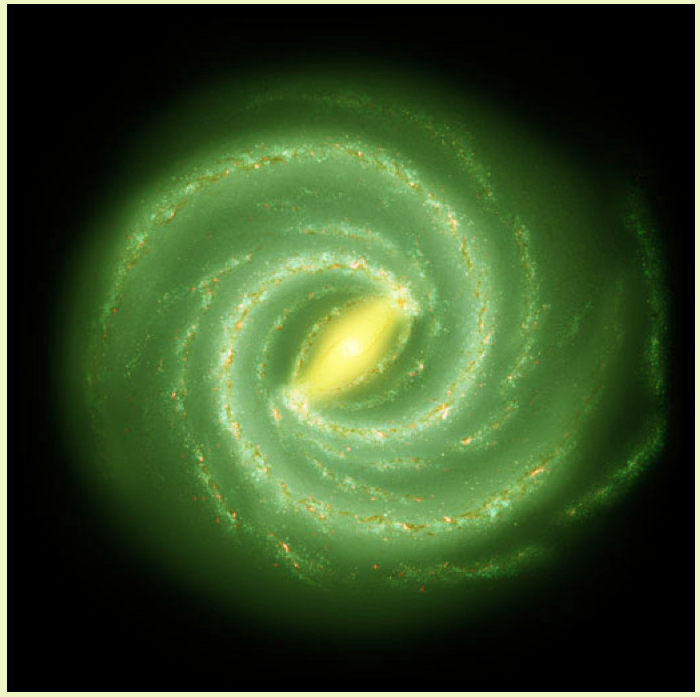 Altered image of our Milky Way galaxy. (altered from Nasa.gov)

The best analogy given to me describing the study our our galaxy was, “It’s like you’re a blueberry buried deep inside a pancake, and want to understand the global features of the pancake.”  Lucky for us, the Milky Way is not the only galaxy in the universe, and so based on what we do know, we can infer the rest based on observations of other galaxies thought to be similar to our own.  Despite our disadvantaged position to study the entire galaxy, we know a substantial amount about our own small quadrant; however, we still lack solid estimates of basic comparable properties like star formation rate and color.

The authors are primarily interested in taking existing assumptions about our Milky Way based on previous observations and comparing them to morphological, color, and other characteristics of M31, a large sample of similar galaxies derived from the Galaxy Zoo classification of SDSS galaxies, and a host of galaxies derived from a semi-analytic simulation. The Galaxy Zoo control sample is trimmed to contain galaxies with low redshifts (

. They then only select a sample of Milky Way/M31 analogue galaxies which:

The semi-analytic galaxies are chosen to: 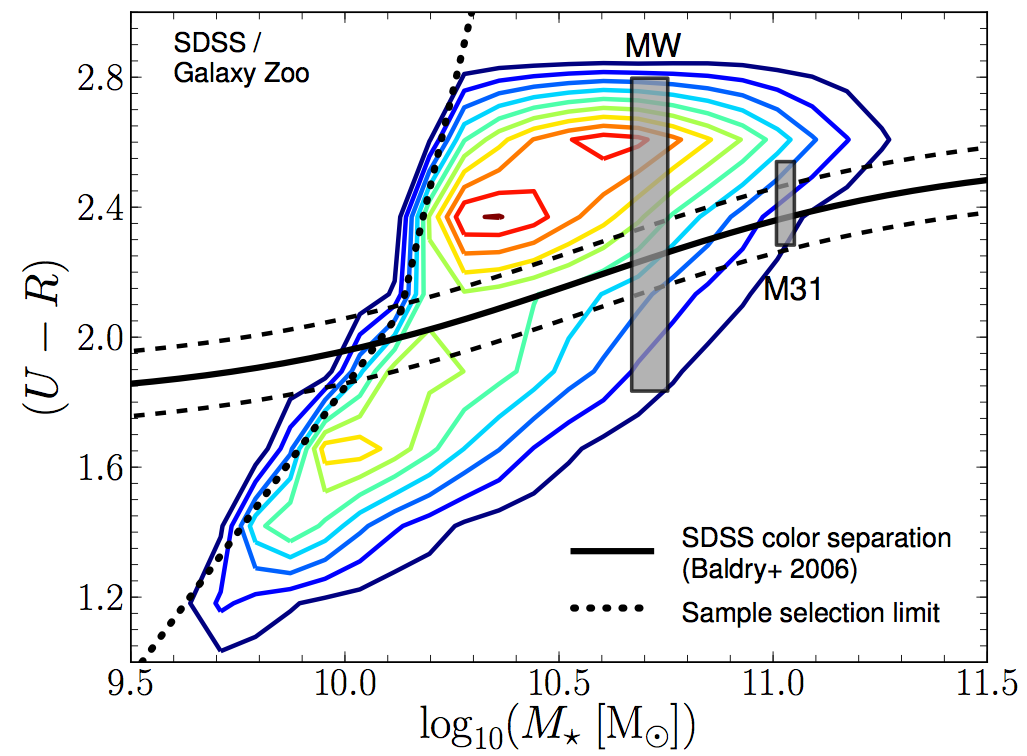 Contour plot of galaxy distribution in color-magnitude space for the full Galaxy Zoo sample used in this study. The boxed regions indicate the estimated regions where the Milky Way and M31 would fall.

One way to infer a galaxy’s evolutionary stage is through its color. As a galaxy ages, the cold molecular gas used to build new stars is depleted causing star formation to slow.  The stellar population will, on average, then grow older and make the galaxy appear redder. In contrast, galaxies with a blue appearance also exhibit recent or ongoing star formation and are thought of as “younger”. These two color classes of galaxies, termed the “red sequence” and the “blue cloud”, are spliced by an underpopulated region in color-magnitude diagrams which are now referred to as “green valley” galaxies (See Galaxy and AGN types and Dissecting a Merger Between a Quasar and a Green Valley Galaxy). The authors find a color for M31 consistent with the green valley, however, the uncertainty on our own Milky Way doesn’t allow for a color classification. 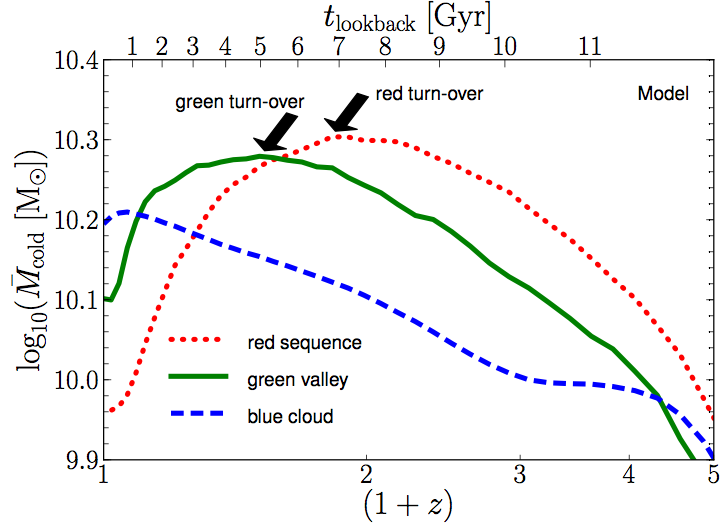 The mean cold gas mass of each color sub-sample of Milky Way type galaxies as a function of redshift in the author's semi-analytic model.

The authors then tackle several explanations for how the Milky Way could be ‘green’. First, they rule out that a redder galaxy implies an earlier formation time based on the distributions of each color regime as a function of redshift. Next, the authors use their models to see that the star formation histories seem to exhibit a more gradual decline rather than a sharp shut-off. The conclusion is that the cold, star forming gas is being depleted. They determine from their models that this is a result of heating from an active supermassive black hole. Both the Milky Way and M31 are not considered to be active galaxies, but observational evidence of ‘bubbles’ far above the disk of our galaxy indicates that the Milky Way may once have hosted an active center.

The main result that both the Milky Way and M31 may be ‘green’ has several implications. One is that they may not be “typical” spirals and instead be in a more transitional phase that is allowed when not harassed or involved in major mergers. The authors also suggest that it may be more common than previously thought for galaxies to first evolve onto the red sequence BEFORE going through a major merger as our own galaxy and M31 are expected to accomplish. This paper provides an alternative view of our galaxy that will be tested more thoroughly when new, high-powered surveys like GAIA and HERMES arrive. 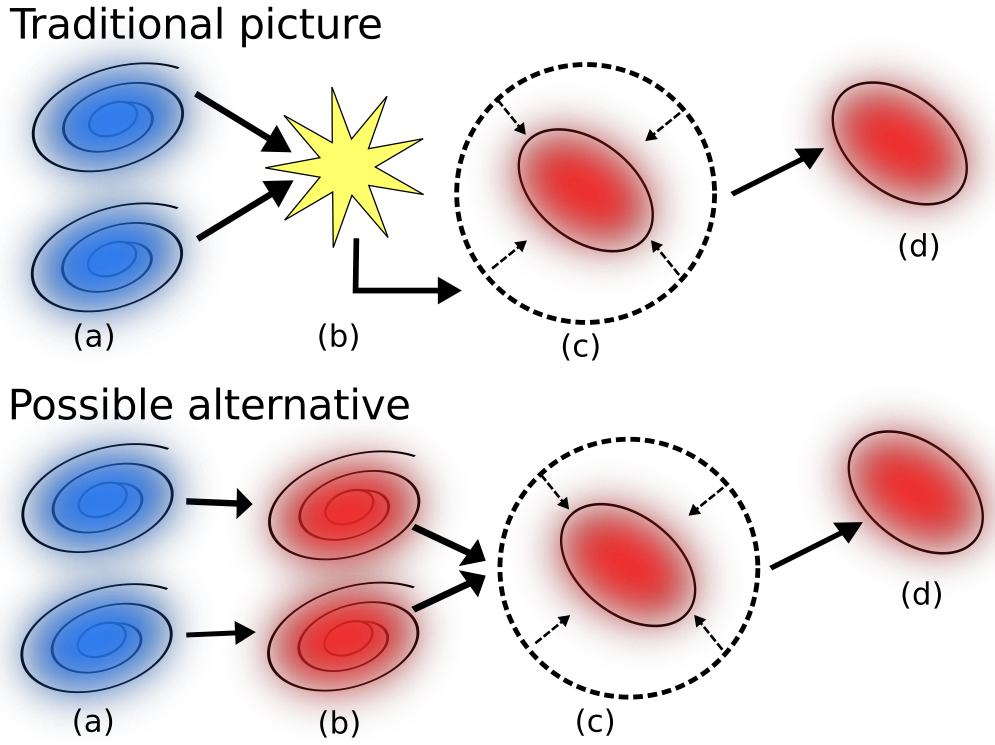 The traditional picture of galaxy evolution in a hierarchical universe vs. a possible alternative involving passively evolving systems prior to a major merger.