Introduction
According to the exoplanet database exoplanet.eu, there are currently 515 known planets outside of our solar system. Approximately 20% of these planets are transiting planets, which means that their orbits cause them to pass in front of their host stars as seen from Earth. During a transit, the host star appears dimmer because some of the starlight is blocked by the disk of the transiting planet. Consequently, transiting planets can be detected by watching for periodic dips in the brightness of the host star.

In this paper, Szabó and Kiss compared the planetary parameters of 106 transiting exoplanets to look for clusters of planets in plots of mass versus radius, period versus radius, and other combinations of parameters. Several of those plots are shown below:﻿﻿﻿﻿ 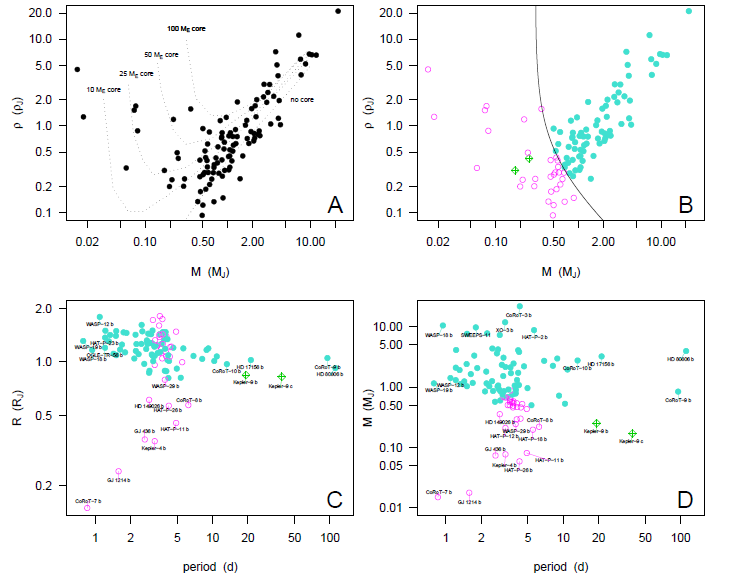 From Figure 1 of Szabó and Kiss. Panel A shows the density of each planet as a function of mass. The underlying dashed lines represent models from Fortney et al. 2007 for a range of planetary core masses. In the panel B, the authors have separated the planets into two mass-density subclasses. The lower two panels display the two subclasses of planets in radius-period space (panel C) and mass-period space (panel D).

Methods
The authors first performed a cluster analysis to classify the planets into subclasses and then applied a statistical test to investigate the probability that the “low-period desert” for sub-Jupiters occurred by chance. To perform a cluster analysis, a researcher first identifies subgroups in one plane (here, mass versus density) and then uses the same color coding to plot the data in several other planes (e.g., radius versus density).

Future Work
The statistical test revealed that the “low-period desert” for sub-Jupiters is real, but the desert is not produced in theoretical models of planet formation. Further work is required to improve both planet formation models and the database of measured planetary parameters.