The Sun’s magnetic field is generated via the αΩ dynamo (Parker 1955), which is believed to operate at the boundary between the radiative inner zone of the Sun and the convective outer zone. The αΩ dynamo incorporates the effects of differential rotation (which wraps field lines around the Sun) and convection (which twists field lines). Because the rotation rate of Sun-like stars influences field strength, astronomers observe correlations between the magnetic activity (as measured by Hα, Ca II H&K, X-ray, and radio emission) and the rotation rate of F to early-M dwarfs. However, smaller stars at spectral types later than M3 are fully convective and therefore cannot produce an αΩ dynamo because they do not contain an interface between a radiative zone and a convective zone. Several mechanisms have been proposed to explain magnetic field generation in these stars, but the jury is still out on the processes governing magnetic field formation in fully-convective dwarfs. 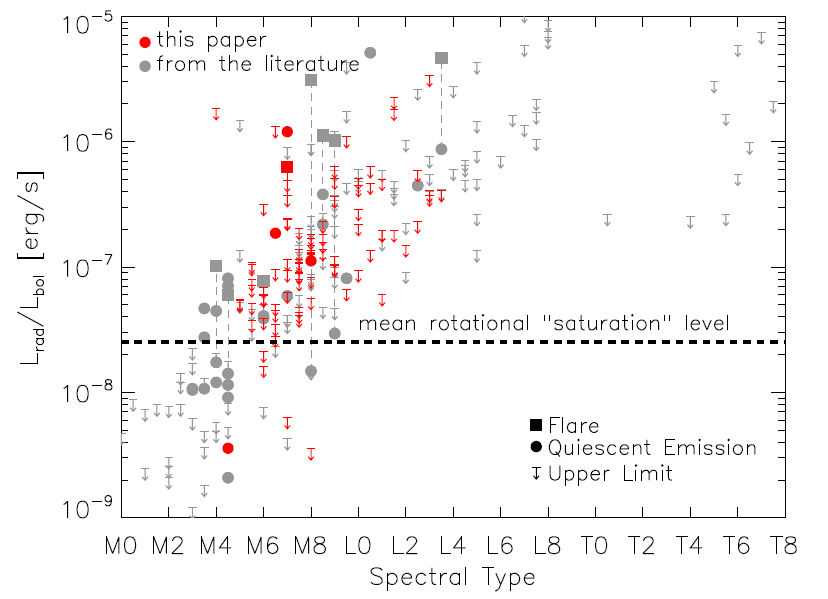 The ratio of radio luminosity to bolometric luminosity versus spectral type for the dwarfs in the McLean et al. sample (red points) and dwarfs from the literature (gray points). The squares mark flares while the circles mark quiescent emission. Upper limits for objects without measured radio luminosities are shown as downward arrows. Figure 2 from McLean et al. 2011. 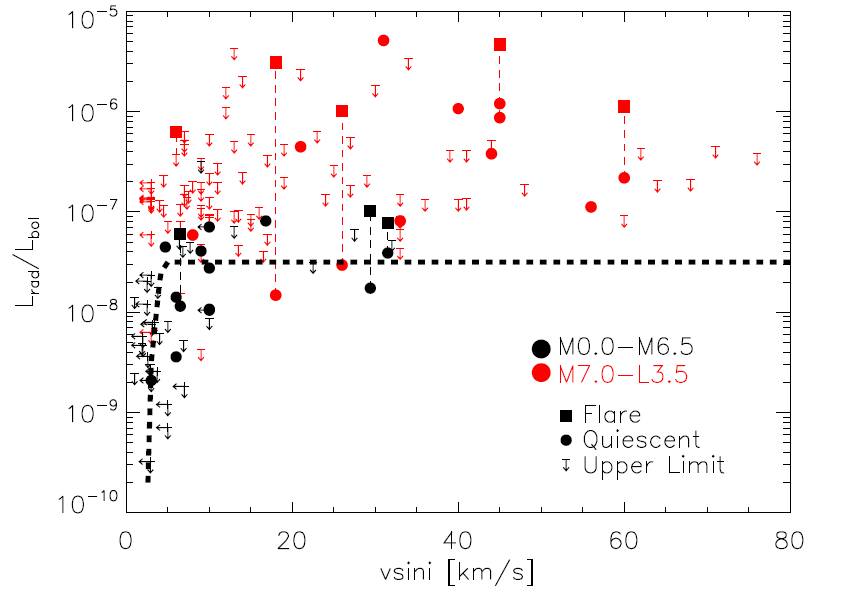 The ratio of radio luminosity to bolometric luminosity versus projected rotation velocity for M0-M6.5 dwarfs (black) and M7-L3.5 dwarfs (red). Note that the luminosity ratio for the earlier dwarfs saturates at 10^(-7.5) for projected rotational velocities above 5 km/s while the ratio for the later dwarfs increases to ~10^(-6.4). The dashed line is a fit to the radio activity-rotation relation for the earlier dwarfs. Figure 5 from McLean et al. 2011.

McLean et al. also find that the fraction of objects with detected radio emission increases with projected rotational velocity, which indicates that rotation rate plays a role in whether an ultracool dwarf emits at radio wavelengths even if the level of radio emission does not scale with rotation rate. The final three figures of the paper display the radio luminosity, ratio of radio to bolometric luminosity, and radio surface flux to the Rossby number of the stars. The Rossby number is the ratio of a star’s rotation period to the convective turnover timescale and is a useful number for predicting the activity of F to early-M stars. McLean et al. show that the trend of increasing radio activity with decreasing Rossby number (increasing rotation rate) continues for later spectral types, but that the relations between Rossby number and X-ray or Hα activity breakdown for spectral types later than M7. As shown in the figure below comparing the radio, X-ray, and Hα activity ratios as a function of Rossby number, McLean et al. find a single unsaturated trend in radio activity with Rossby number. 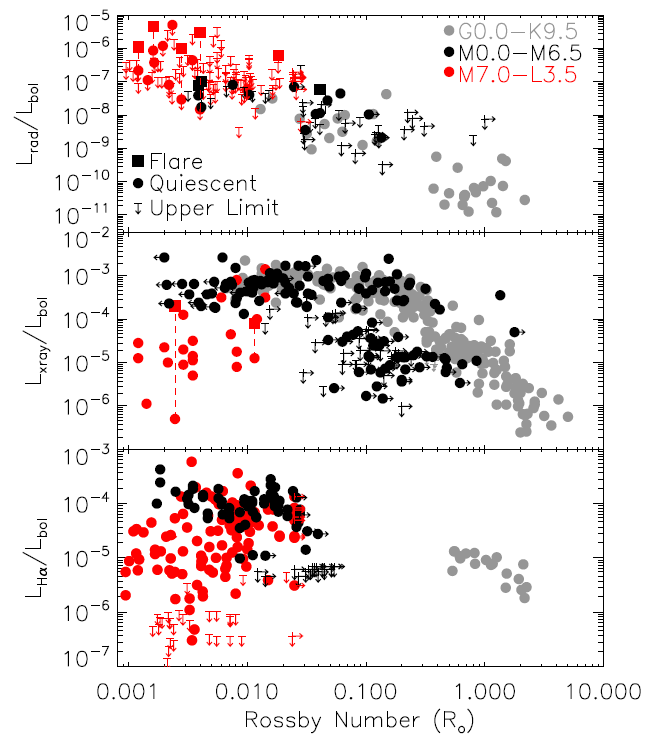 The ratio of radio (top), X-ray (middle), and Halpha (bottom) luminosity to bolometric luminosity versus Rossby number (the ratio of the stellar rotation period to the convective overturn timescale) for G0-K9.5 dwarfs (gray), M0-M6.5 dwarfs (black), and M7-L3.5 dwarfs (red). The trend of increasing radio activity with decreasing Rossby number (top) extends over the whole spectral range from G0 to L3.5, but the relations between X-ray and Halpha activity and Rossby number break down for later spectral types. Figure 9 from McLean et al. 2011.