In my last astrobite I discussed a paper by Gaidos et al. about combining the exoplanet radii measured by Kepler with the masses measured by the M2K Survey in order to probe the density distribution of exoplanets. As promised, my astrobite today will cover another recent paper about combining data from radial velocity surveys with data from Kepler.

The main question addressed by Wolfgang & Laughlin is how to reconcile the relatively high occurrence rate of Super-Earths and Mini-Neptunes reported by the High Accuracy Radial velocity Planet Search (HARPS) with the lower occurrence rate announced by the Kepler team. The HARPS team posted a paper on September 12 containing detailed information about the occurrence rate and mass distribution of RV detected planets, but that paper was not yet on the arXiv when Wolfgang & Laughlin posted their paper. Instead, Wolfgang & Laughlin chose to compare the preliminary HARPS result that 30-50% of Sunlike F and G stars harbor planets less massive than Neptune to the result from the Kepler team that only ~15% of stars host planets smaller than 4 Earth radii with orbital periods less than 50 days.

Since RV surveys measure masses while transit surveys measure radii, comparing the two occurrence rates requires a relationship between radius and mass. If all of the planets have the same density, then the problem would be simpler because a planet with a larger radius would always be more massive. However, Wolfgang & Laughlin find that a heterogenous mix of both rocky planets and gaseous planets produces a better fit to the Kepler and HARPS data than does a population consisting solely of planets with the same density. They also find that small planets are preferentially rocky, which is good news for astronomers looking for Earth-like planets!

Wolfgang & Laughlin begin their analysis by generating a population of planets drawn from a power law distribution in mass and orbital period. They require an orbital period of 2-50 days and restrict the planet mass to between 1 Earth mass and 1 Neptune mass. For each planet, Wolfgang & Laughlin draw an orbital eccentricity from a uniform distribution between e=0 (circular) and e=0.2 (same eccentricity as Mercury). They assume that planetary inclinations are randomly distributed and draw a random inclination for each planet. 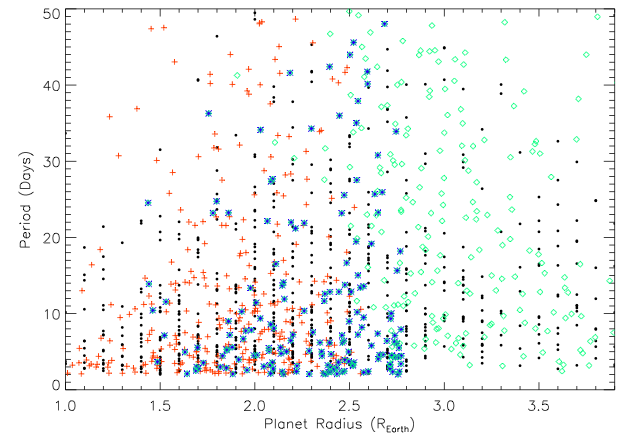 Radius and period distribution of Kepler candidates and simulated planets generated from the multi-valued mass-radius relation. The black dots mark Kepler candidates and the colored symbols denote simulated planets. The red plus signs are rocky planets, the green diamonds are gaseous planets, and the blue asterisks are gaseous planets that have undergone significant mass loss due to stellar irradiation. Figure 4 from Wolfgang & Laughlin 2011.

Comparing to the Kepler Results

In order to assess how well the modeled distribution of planets reproduces the Kepler results, Wolfgang & Laughlin apply a two-dimensional K-S test to the radii and period distributions of the simulated planets and the Kepler candidates. Since K-S tests are most sensitive to the means of the distributions (i.e., medium size planets in medium length orbits), Wolfgang & Laughlin also perform a chi-squared test to compare the planet radii to ensure that the population of small planets is well-matched. Wolfgang & Laughlin vary the mass power law index, period power law index, and rocky planet fraction (as a function of radius) to test a variety of underlying planet distributions. As shown in the figure below, the Kepler candidate list is best matched by a model planet population in which most small planets are rocky (70-100% rocky at 1 Earth mass) and most large planets are gaseous (0-20% rocky at 1 Neptune mass).

In summary, both Wolfgang & Laughlin 2011 and Gaidos et al. 2011 argue that small planets are predominantly rocky. They begin with different radial velocity data sets, but both teams arrive at the same conclusion. Given the recent paper by the HARPS team, we should expect to see even more exciting results about the mass-radius-period distribution of exoplanets in the near future.