Several recent astrobites have focused on NASA’s Kepler mission to detect transiting planets around main sequence stars. In this ApJ Letter, Eric Agol proposes a ground-based survey to detect transiting planets in the habitable zones of white dwarfs. As defined by James Kasting, Daniel Whitmire, and Ray Reynolds in 1993, the habitable zone is the distance from the star at which a planet’s surface could support liquid water. While the actual habitability of a planet depends on both planetary parameters (inclination, obliquity, eccentricity, atmospheric composition, ocean coverage, etc.) and stellar parameters (temperature, susceptibility to flaring, etc.), the distance-based liquid water habitable zone is a useful starting point for exploring the habitability of a system for life as we know it. In this paper, Agol uses a more sophisticated version of the habitable zone that incorporates both water loss at small distances and the greenhouse effect at larger distances. The planets are assumed to form after the star becomes a white dwarf or to migrate inward from more distant orbits. 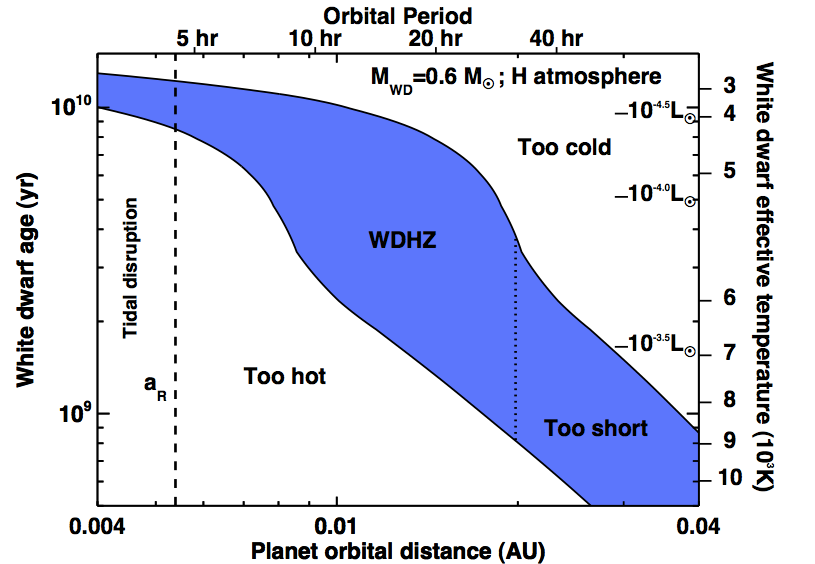 The habitable zone for a 0.6 solar mass white dwarf as a function of white dwarf age and orbital distance. Planets inside the blue region could support liquid water on their surfaces while planets to the lower left are too hot and planets to the upper right are too cold. The dashed line near 0.005 AU indicates the orbital distance inside which tidal forces would destroy a planet. The dotted line at 0.02 AU marks the orbital distance beyond which the planet remains in the habitable zone for less than 3 billion years. Figure 1 from Agol 2011.

In addition to tracking the location of the habitable zone as a function of time, Agol also determines the continuous habitable zone (CHZ). He defines the CHZ as the distance from the star at which the planet can support liquid water for a minimum amount of time tmin. The figure below displays the location of the CHZ (shaded green) as a function of white dwarf mass and planet orbital distance. As shown by the dotted and dash-dot lines in the figure, the outer boundary of the CHZ moves outward if the time required in the habitable zone is decreased to 1 billion years and inward if the time required is increased to 5 billion years. The position of the outer boundary also changes if the white dwarf has a helium atmosphere (dashed line). 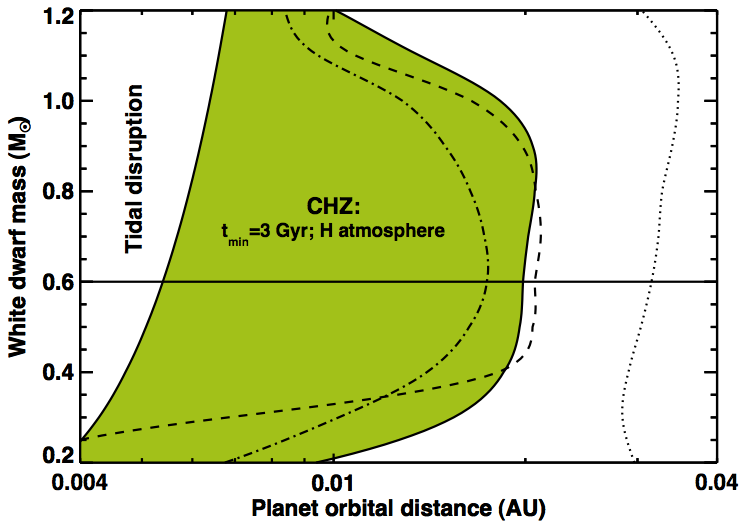 The continuous habitable zone (CHZ) as a function of white dwarf mass and planet orbital distance. The green region marks the CHZ for a planet orbiting a white dwarf with a hydrogen atmosphere. As discussed in the text, the other lines indicate the outer boundary of the CHZ for a He atmosphere (dashed), tmin=1 billion years (dotted), and tmin=5 billion years (dot-dash). The horizontal line marks the mass of the white dwarf plotted in the first figure. Figure 2 of Agol 2011.

In the final sections of the paper, Agol discusses the implications of these results for planet detection around white dwarfs. If the occurrence rate of 0.1 MEarth-10MEarth planets in the 3 billion year CHZ is 10%, then a 2 year survey of 2800 white dwarfs at 25% efficiency by a network of 20 1-meter telescopes would result in the detection of approximately 10 planets. Decreasing the maximum orbital distance or the number of white dwarfs searched would decrease the required time, but the number of detected planets would decrease as well. If the occurrence rate is lower than 10%, Agol advises using the wide field-of-view of the future Large Synoptic Survey Telescope (LSST) to observe multiple white dwarfs simultaneously rather than imaging each white dwarf separately. The detection of a planet in the habitable zone of a white dwarf would be a thrilling discovery for astronomers and astrobiologists alike, but further work must be done to obtain a sample of nearby cool white dwarfs before a transit survey can begin.