Water plays an important role in the inter-stellar medium where it can cool the gas through emission mechanisms as well as take part in chemical reactions. Theory predicts larger water abundances in star-forming regions where heating and shocks from accretion or outflows can release water locked in icy grains. Observations of the water emission provide insight into these physical processes that play an important role in star formation. The authors of this paper used radio observations to try to map the water in Cep E – a star forming core where the young star is still completely enveloped by its birth cloud of gas and dust. 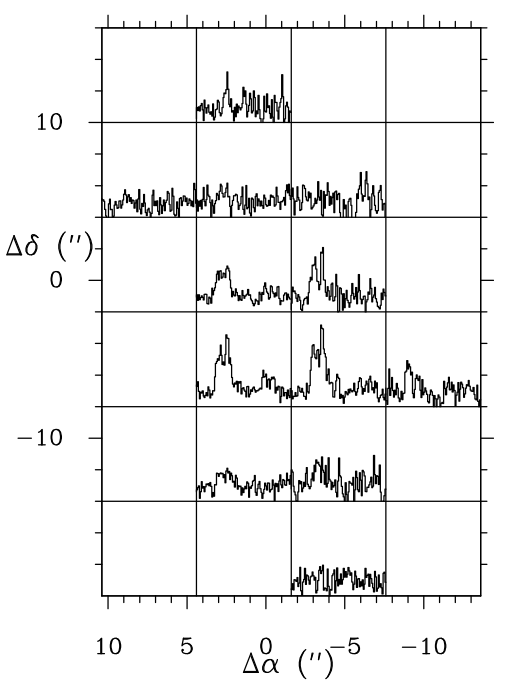 Earlier observations of this object had indicated large amounts of water thought to come from low-velocity shocks. Getting good spectral and angular resolution for these objects is difficult in part because they are small and also because most water lines are absorbed by the atmosphere and, therefore, must be observed from space. However, water is a complex molecule with a huge host of possible emission lines. The authors utilized a special line that not only can be observed by radio telescopes, but is also enhanced by the masing effect. Essentially the masing phenomenon occurs when photons of a specific frequency travel through a cloud where atoms exist in an excited, resonant state. The traveling photons causes these excited atoms to emit photons of the same frequency. This effectively amplifies an emission line so that astronomers on Earth can observe what would otherwise be a very weak line. Using a single dish radio telescope to observe this line, the author’s were able to associate the water with high velocity gas clumps.

Silicon Oxide is another good tracer that can be observed after it is released from the dust grains by shocks. Matching models of both the water and SiO emission to the observations let the authors try to determine the physical properties of the clumps as well as the column density of water. From this result, the authors suppose that the water emission might arise from a very sharp region, much smaller than their observations can resolve.

Important physics takes place on a huge range of scales in astronomy and utilizing tools to probe small regions can reveal information not implied on other scales. For these particular objects, such observations will provide insight into the physical conditions and relevant processes.