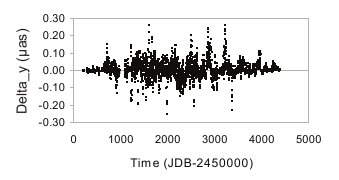 Apparent shifts in the position of the sun on the sky due to solar spots and plages from 1996-2007. These are apparent movements in the direction perpendicular to the Sun's equator if it were seen edge-on and are measured in microarcseconds (1/3,600,000 of a degree). From Figure 1 of Lagrange et al. 2011.

Understanding the uncertainties involved in the techniques used to detect exoplanets is an important aspect of the search for life beyond the Earth, especially in light of recent controversy over the statistical significance of planet detections. Consider for example Kepler, NASA’s 1.4 m space telescope that will spend at least 3.5 years staring at 100,000 stars. It’s looking for transiting exoplanets, which block part of the light from their host star if they happen to pass in front of our line of sight. We can detect these transits and infer the properties of the planet by watching for tiny dips in the light curve (brightness over time) of the star. But what if the star dims for some other reason – would this interfere with our ability to detect a planet?

It has been known for centuries that certain types of stars expand and change in temperature periodically (causing periodic brightness and color changes), and indeed Kepler was designed in part to study stellar variability. The classic examples of stellar variability are huge in scale and fairly easy to distinguish from the signatures of a planet, but some stars (for instance, the Sun) exhibit more subtle changes which pose significant challenges to planet detection.

The authors investigate whether or not we could succeed in detecting the Earth if we were to observe a twin of the solar system seen edge-on from 10 pc away (1 parsec = 3.26 lightyears). In this paper, the third in their series, they address the consequences of stellar spots and plages on astrometric detection campaigns.

Spots are dark, low temperature regions that occur in stellar photospheres (the surface where most of the light we see comes from). Their formation is related to high concentrations of vertical magnetic field lines. Similarly, plages and network structures are regions with bright Halpha emission that appear in the chromosphere (right above the photosphere). Because spots and plages tend to be periodic on a scale of years, they can look similar to the periodic effects of orbiting planets.

The astrometric technique for exoplanet detection is an alternative to the transit technique Kepler uses. Instead of looking for changes in brightness, astrometry looks for change in apparent position as the star and its planets orbit a common center of mass (“wobble” in the sky). (Dark) spots and (bright) plages obviously affect the brightness of the star, but they also affect it’s apparent location by changing the position-weighted brightness distribution of the stellar disk.

To simulate observations of the solar system, the authors use >10 years of satellite measurements, consisting of ~21,000 solar sunspot groups and ~1.8 million solar plages and network structures. They find that the astrometric variability of the Sun over this time is about five times less than the astrometric signature of the Earth. The authors comment that another technique for exoplanet detection, radial velocity measurements (relying on the Doppler shift of a star’s spectrum as it orbits the center of mass) are more sensitive to the noise introduced by solar spots and plages. They therefore support the use of astrometry in detecting Earth-mass planets in the habitable zones of active Sun-like stars.