One of the most exciting and fastest growing subfields of astronomy is the detection and study of extrasolar planets.  Most of the planets orbiting other stars have been identified through two main methods.  The first is by looking for the dip in flux we receive from the star as the planet moves transits between us and the star.  The second is by looking at the spectrum of the star.  Because planets exert a gravitational pull on the star therefore placing the center of mass away from the center of the star, the star itself will also move in a tiny orbit around the center of mass. By looking at how the spectrum is redshifted and blueshifted when the star wobbles away and toward us respectively, astronomers can deduce the mass and period of the planet in orbit. 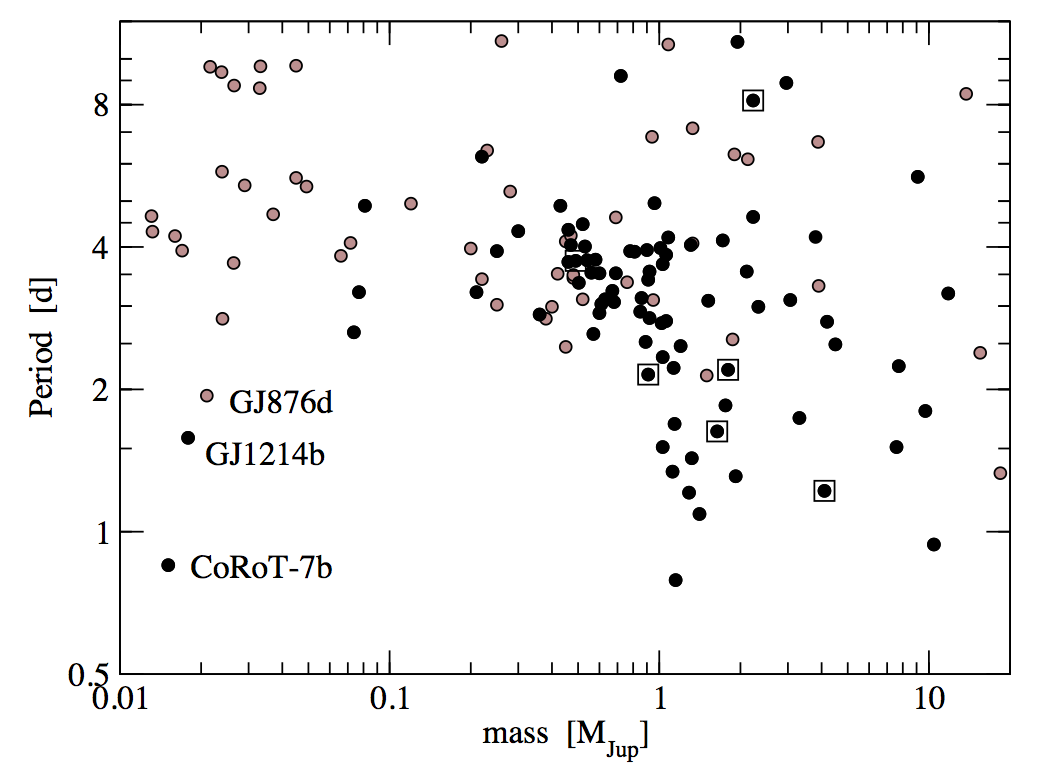 Both these methods have proven very successful, but the obvious selection effect is simply the age of the science itself.  Because detection of extrasolar planets is a relatively new endeavor, astronomers have detected many more short period planets (timescale of earth days/weeks) than planets with more lengthy periods (timescale in earth years).  Benítez-Llambay et al. look at the growing population of short period planets and identify a trend. In a plot of planet mass vs. orbital period, a noticeable void is present in the area where planets with < 1 Jupiter mass and < 2 earth-day orbital period would lie.  In other words, there is a lower limit to how close a planet with less mass than Jupiter can orbit to the star (with several exceptions).

The authors seek a physical explanation for this noticeable “step” in the distribution by running several hydrodynamic simulations using the FARGO hydrocode (Masset 2000a,b).  Their simulation is scale-free and specific values for the various parameters are listed in the paper.  During the simulation, they look at the orbital decay of high and low-mass planets in a disk with an inner edge around a solar mass star.  The authors show that differences in how the orbits evolve over time will explain the void in the distribution.

Conclusions:  When a low-mass planet (0.1 Jupiter masses) is placed in a stable disk around a star, it undergoes constant orbital decay until it finds itself slightly outside the cavity.  The more massive planet (10 Jupiter masses) undergoes Type II migration.  Type II migration is when the growing planet is massive enough (> 1 Jupiter mass) to open a gap in the disk and disrupt the local density profile of the disk.  Because of this disruption, the strong co-rotation torque exerted by the cavity edge is unable to trap the planet and it continues to decay until it reaches approximately a 2/1 resonance with the inner cavity.

The authors test a range of masses and find their results reproduce the minimum period boundary when scaled correctly.  The paper hints that other factors could contribute to the observed distribution such as the presence of multiple planets in a system.  As the extrasolar planet count increases more rapidly, scientists can statistically rule out any kind of selection effect that may reproduce the distribution and lend support to the conclusion found in this paper.