It is currently accepted that most, if not all, galaxies have a black hole smack dab in their center. These black holes are mind bogglingly massive – think millions to billions of suns! Theories of how these objects come to exist and affect their host galaxies have been sparked, in part, by a number of observed relations between a super black hole’s mass and the host galaxy’s attributes. From large-scale dynamics of the stars to the galaxy’s luminosity, surprisingly tight relations appear in the data. Some theorists try to explain these observations by examining how energy released by matter falling into the black hole might affect the galaxy. This paper focuses on whether the central black hole grows before stars group on galactic scales to form the galaxy. 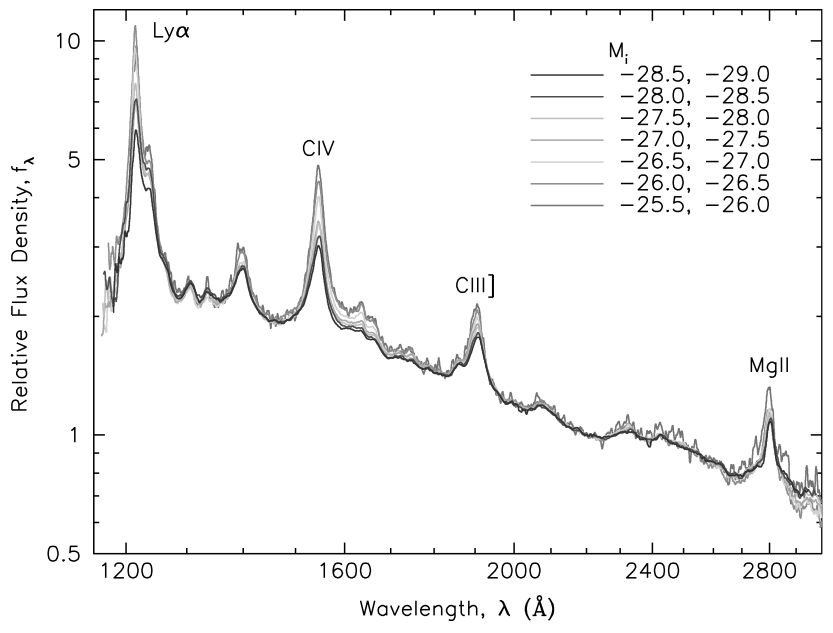 Example spectra of broadened lines from Peterson (2006). Mg II is the line at 2798 Angstroms.

To answer this question you would really like to know the mass of the black hole. Kepler’s laws are a great way to determine masses if you can track individual stellar orbits, but these galaxies are much too far away.  Instead, this paper utilizes an empirical relation between the width of an Mg II line (once ionized Magnesium) and the luminosity of the AGN. In essence the first measurement measures how quickly gas near to the black hole is moving. As the gas whizzes about and emits light the photons’ energies will be shifted by the Doppler effect. For an observer far away, a population of photons that originally all had the same energy will now appear to be smudged across a range of energies – the line has been broadened. The more massive the black hole the faster the gas whizzes and the more dramatic the effect. The second measurement, the luminosity of the AGN, is an indicator of how large the photon emitting region is. To determine the width of the Mg II line you’ll need good spectra which means a trip to a big telescope or, in this case, to your computer for archived telescope observations. This paper does the analysis for 11 galaxies with actively accreting black holes (AGNs) selected by their bright X-ray emission.

Finally we can compare the estimated mass values of a) stars that make up the entire galaxy, b) stars that make up only the most central region of the galaxy or the bulge, and c) the black hole mass. Taking a look at the figure below you might notice that the 11 galaxies mostly lie to the left of the dotted line. This line represents where galaxies close to us would be on the plot (or you can look at the black points). In essence, this means that for these distant – or young – galaxies the black hole mass appears to have grown more than the stellar component. From this study it seems that black hole grows faster than the galaxy! 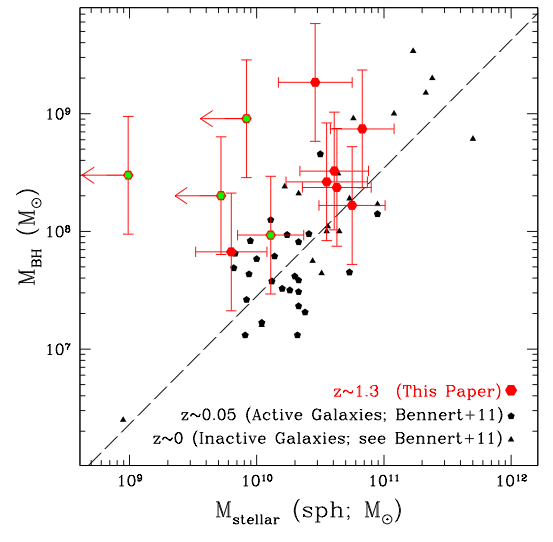