In a recent astrobite, Dan briefly touched on some of the main events of cosmological history, namely the distinct periods of recombination and reionization.  Recombination occurred as the expansion of the Universe caused matter to cool to the point to where it could form neutral atoms (mostly neutral hydrogen).  Eventually, dense clumps of neutral gas gravitationally formed the first stars, which began to emit ionizing radiation–mostly in the UV– and helping to initiate a “phase transition” in the Universe, re-ionizing most of the Universe’s gas.  This is a broad view of the canonical story of how reionization occurred.  However, recent observations have suggested that this may not be the full story; specifically, it is uncertain if the first stars alone could have maintained ionization in low density regions of the intergalactic medium (IGM) far from galaxies.

The authors of today’s paper propose that, in addition to the ionizing effects of the first stars, the ionizing radiation from the first stellar black holes may also have played an important role in reionization.

An artist's conception of cosmological history. Notice the little ionized "bubbles" that form around the first ionizing sources. These bubbles eventually overlap, resulting in the highly ionized Universe we observe today

A Brief Intro to Black Hole Accretion and Feedback

A black hole sitting by itself would, by definition, not be visible at all (ignoring, for the moment, quantum effects such as Hawking radiation).  But astrophysical black holes are often found in environments where they can gravitationally accrete gas.  As matter funnels into the black hole, typically forming an accretion disk, it is compressed to high densities and becomes extremely hot as its initial gravitational potential energy is efficiently converted to kinetic and thermal energy.  This superheated in-falling matter then emits radiation–including optical and UV photons and X-rays– into the surrounding environment in a feedback phenomenon.  Ironically, black holes rapidly accreting matter can become some of the brightest, most energetic objects in the known Universe (for example, quasars).

Just as the first stars emitted ionizing radiation, the authors proposed that when some of these stars collapsed to form black holes, these accreting black holes emitted large amounts of ionizing radiation as well.  And while hot stars emit a great deal in the UV, astrophysical black holes can be bright sources in the X-ray bands, an even more energetic band which can cause multiple ionizations per photon.

Are there enough black holes to be significant?

The fact that black hole accretion is such an energetic process suggests that it could be import in reionization.  The next question is: were there enough stellar black holes at this early time to significantly contribute to reionization?  The authors point to observations that show several points [in the below, keep in mind that higher metallicity is correlated with older galaxies, etc.]:

The authors, taking all of these factors into consideration, argue that the rate of formation of black hole binaries in the early Universe was signifcantly higher than at the present.  This, coupled with the earlier arguments about the ionizing power of black hole accretion, provides additional evidence that stellar black holes may have been important players in cosmological reionization. 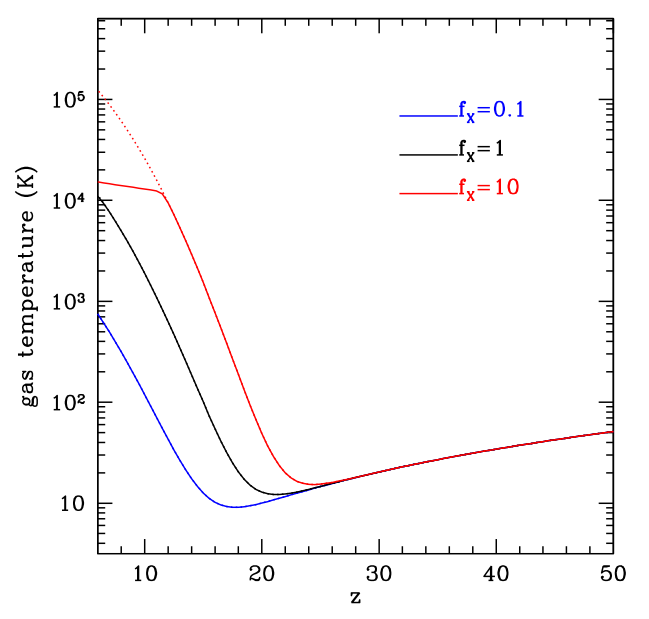 The authors then explore some of the implications of black hole reionization.  In 2006, Furlanetto showed that soft X-rays–or lower energy X-rays in the range between 0.1 and 10 keV– and inverse-Compton scattering from relativistic electrons could have a profound impact on the amount of heating of the low-density neutral IGM.  (Accreting stellar black holes generate both of these types of radiation [see figure].)  The precise temperature evolution of the neutral IGM, in turn, strongly affects the global 21 cm signature (radiation associated with a quantum spin flip in neutral hydrogen), which is expected to be accurately mapped by the next generation of radio interferometers such as the MWA, LOFAR, and SKA.