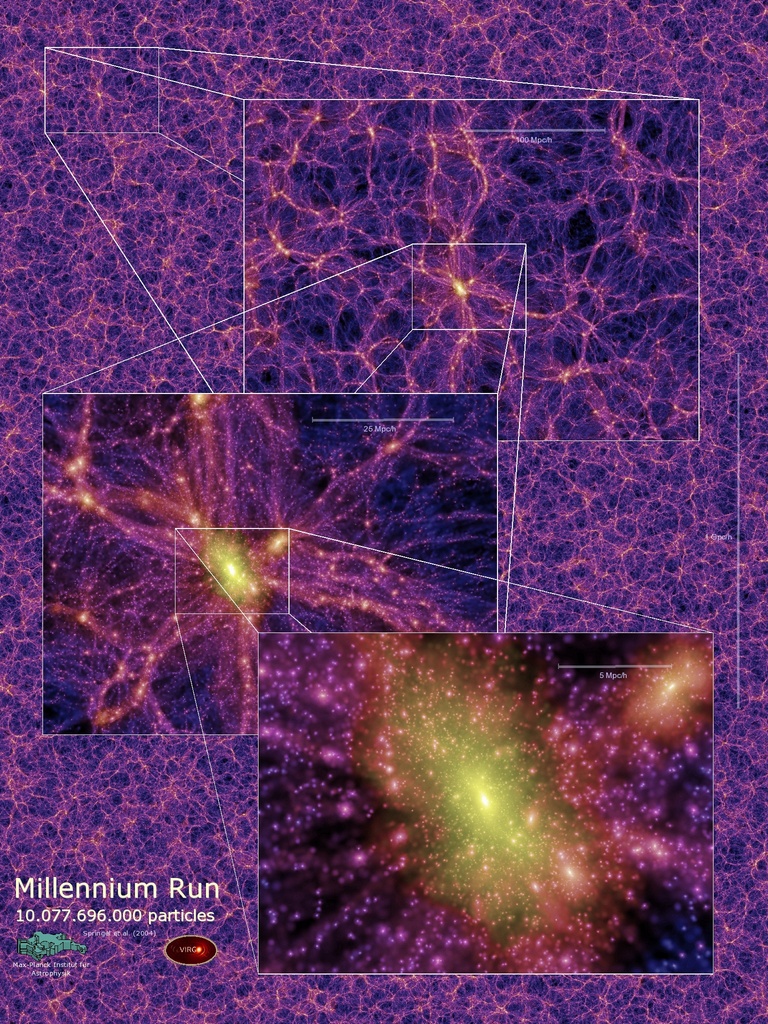 A slice from the Millennium Simulation

Within the past 20 years, astronomers have taken our increased understanding of cosmology and a rise in computing power to simulate the growth of structure and galaxies in our universe.  The Millennium Simulation is a beautiful example of an over 10 billion particle simulation that tries to reproduce the cosmic web of dark matter upon which exist galaxy clusters, filaments, and voids we see today.  Our current model of the universe is given the name

(dark energy?), and structure formation is dominated by cold (non-relativistic) dark matter.  Many simulations like the one above are created by researchers using these parameters, and many of them find a similar problem.  The

models explain the structure formation on large scales, but they predict an order of magnitude more dark matter subhalos than we observe residing in halos of typical galaxies like our own Milky Way.  A halo can be simply thought of as a dark matter backbone (thought to be roughly spherical around galaxies) where visible matter collects to form large objects like galaxies and clusters.  A subhalo is a smaller dark matter halo living inside a larger one.  Large surveys like the Sloan Digital Sky Survey (SDSS) and Pan-Starrs are scanning the skies and discovering many new satellite galaxies which reside in subhalos around our Milky Way, but the difference between the observed number and those predicted by simulations is still great.  It is possible to partially explain the difference by invoking sensitivity limits and incomplete sky coverage of the surveys, however there are other factors that make it difficult to see these objects.  The existence of these missing halos will be an important constraint on the nature of dark matter and structure formation.

The authors of this paper consider that instead of identifying the multitude of subhalos with direct observations, one way to prove or disprove their existence is by observing long disrupted tails from globular clusters or other satellite galaxies around our galaxy.  These debris tails can be dynamically cold and be distributed in a very narrow region of space.  Because the streams can extend over a great distance, they can be used as probes of the gravitations potential of the parent galaxy’s halo.  On small scales, these streams can interact with subhalos in a way that would produce observable perturbations to the distribution of matter.  These types of effects have been explored in other studies, but the authors analyze the influences of subhalos in each mass decade separately to better understand the frequency of expected encounters.

In their study, the authors model the large parent galaxy in a Navarro-Frenk-White (NFW) potential which is a typical potential used now-a-days for galactic sized dark matter halos.  They also assume the NFW profile for the subhalos in their calculations.  Please refer to their paper for the complete treatment of the debris calculations.  Both an analytic and numerical approach are taken to understand the system.  In the end, the analytic approach indicates that a globular cluster in our own galaxy that exhibits a long debris tail, Pal-5, should have suffered hundreds of direct encounters with low mass subhalos around

, and tens of direct encounters with subhalos up to

.  The effects of the encounters will include a heating of the streams, as well as disruption.  The authors also determine that Pal 5’s debris stream should have had interactions with larger subhalos leading to tens of gaps in density of order several degrees, and lower mass halos leading to many more on the sub-degree scale.  In the numerical treatment, the results indicate that thin old streams can survive which disagrees with previous findings.

In section 5.3, there is a good discussion on other influences that can lead to non-uniformity in these streams, but the purpose of the study is to identify the effects from the subhalos.

The four take home points of the study: