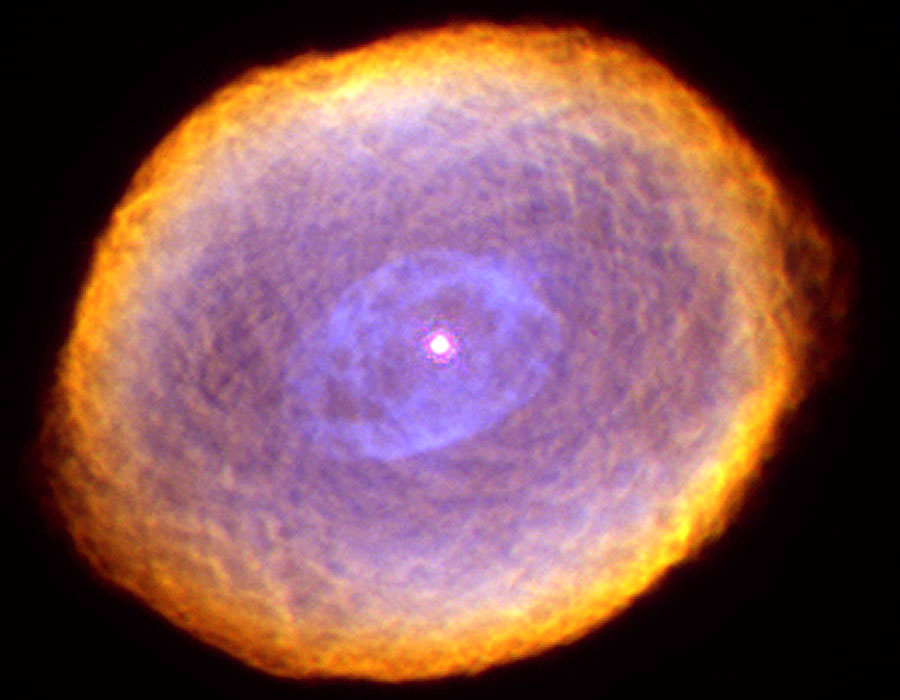 (solar masses) shed most of their mass during the end stages of their evolution.  The ejected mass forms an expanding shell of gas and dust around the star, which dissipates into the surroundings after roughly 50,000 years.  During that short time, UV light from the white dwarf excites the gas and dust in the shell, which then re-emits primarily in the infrared: this is a planetary nebula, possibly one of the most beautiful astronomical phenomena.  I’ve included an example from NASA’s Astronomy Picture of the Day (APOD), right.

The physics of stellar interiors and chemistry suggest that planetary nebulae (PNe) from low-mass stars should be oxygen-rich and display signs of silicate dust, while planetary nebulae originating from high-mass stars should be carbon-rich and have dust in the form of polycyclic aromatic hydrocarbons (PAHs) and carbonaceous grains.  This has largely been confirmed by observations, but recently evidence of  “mixed-chemistry” has come to light: several planetary planetary nebulae display emission lines from both silicate dust and PAHs.  The fact that many PNe (30 of the 40 studied in this work) in the Galactic Bulge show mixed-chemistry has yet to be explained.  Because they originate from old and low-mass stars, these PNe are not expected to be carbon-rich.

In this paper, Guzman-Ramirez et al. explore two possible explanations for the presence of carbon in Galactic Bulge planetary nebulae.  First, the carbon could have entered the PNe as it expands into the interstellar medium.  In this case, PAHs are expected to have been swept up primarily on one side of the PNe.  To test this hypothesis, the authors ask, “What is the spatial distribution of PAHs in these objects?  Are the location of PAH emission lines offset from the others?”  Only a few cases show such a spatial offset.  Second, the PAHs could have been formed internally.  Is there a correlation between PAH presence and physical properties of the PNe?  Stellar class is not found to distinguish between normal and mixed-chemistry PNe but PNe morphology looks promising.

The authors follow-up 22 of the 40 planetary nebulae in the sample with HST to look at their morphology.  Most of the objects are found to have a dense torus (donut) with two of more outflows; this is in contrast the spherical or elliptical structure of most planetary nebulae (e.g. see the APOD photo above).  The authors propose a scenario in which PAH molecules are formed through chemical pathways in high-density regions of an oxygen-rich PNe with the aid of UV photons.  Looking at hydrocarbon chemistry, the authors conclude that such a pathway exists.

Another article on the arxiv today talks about the morphology of planetary nebulae.  De Marco and Stoker look at the influence of substellar companions on PNe, including the possibility that some are shaped by planets.