In a previous post, I described NASA’s EPOXI mission to use the Deep Impact spacecraft to detect transiting exoplanets. In this paper, the authors use EPOXI data to search for additional planets in five known exoplanetary systems. The planetary systems investigated are HAT-P-4, TrES-3, TrES-2, WASP-3, and HAT-P-7. The systems are named after the surveys that detected them: the HATNet (Hungarian Automated Telescope Network) Project, the Trans-Atlantic Exoplanet Survey, and the Wide Angle Search for Planets. Although the authors do not find any new candidate planets in these systems, they are able to constrain the presence of other transiting planets in the systems.

As Ellie explained in her discussion of the Kepler mission, a transiting planets is detected due to the dip in the apparent brightness of the host star. Accordingly, Ballard et al. look for the signatures of additional planets in these systems by monitoring the brightness of their target stars for approximately two-week intervals and searching for drops in brightness that are not due to the known planet. They did not find any evidence of additional transits, but there could be other planets in these systems that did not transit during their observations or produced transits that were too small for Ballard et al. to detect. In order to determine their sensitivity to transiting planets with different radii and orbital periods, the authors inject model planetary transits into their acquired light curves and then determine whether their software would be able to detect those planets. 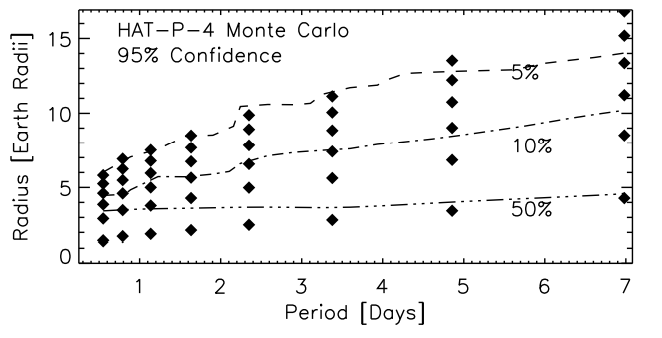 Sensitivity to additional transiting planets in the HAT-P-4 with a range of radii. The diamonds mark the radii and orbital period for the injected planets and the contours indicate the relative error on the recovered planetary radius for 95% of the simulations. Looking at planets with an orbital period of ~2.3 days, we see that the radius of a >7 REarth planet is detected with <10% error in 95% of trials. If the planet radius is decreased to ~6 REarth, then the error in the recovered radius increases to between 10% and 50%. This figure is the top panel of Figure 3 of Ballard et al. 2011