﻿Title: Discovery of an old galaxy at z = 6.027, multiply imaged by the massive cluster Abell 383

Estimating the properties of high redshift galaxies is an extremely tricky business.  Not only are these galaxies faint, but due to the nature of cosmological redshift, observers must look in the infrared to detect their light.  Until recently, infrared surveys using the Hubble Space Telescope were slow and laborious due to the small field of view and poor throughput of the NICMOS camera.  However, with the recent installation of the infrared-sensitive Wide Field Camera 3 (WFC3 or whiff-c-3 if you’re in the know), we can now detect the forebears of local galaxies in abundance and quantitatively trace galaxy evolution over cosmic time.

How exactly do we find high redshift galaxies?  The current workhorse is the photometric droupout technique.  This technique takes advantage of a steep decrease in the luminosity of galaxies blueward of the far ultraviolet Lyman limit at 912 Å.  Photons with wavelengths shorter than 912 Å have energies larger than 13.6 eV and will ionize neutral hydrogen.  Only a little hydrogen will soak up all of these photons, so galaxies appear dim at wavelength blue of the Lyman Limit. This so-called Lyman break in the spectrum of a galaxy sticks out like a sore thumb since an object will be bright in images recorded using red filters but completely invisible in blue filters.  The wavelength band where the object appears gives an observer some idea of the redshift and followup spectroscopy can confirm the redshift by looking for strong ultraviolet emission lines like the Lyman-alpha line of neutral hydrogen.

As one might expect, it’s easiest to pick out the brightest galaxies using this technique and it’s possible that information about dimmer, presumably less massive galaxies has been missed.  This particular paper uses the galaxy cluster Abell 383 as a gravitational lens to magnify the light emitted by a particularly interesting high redshift galaxy located behind the galaxy cluster.  The galaxy cluster’s mass warps, redistributes, and magnifies the light emitted by the background galaxy of interest and produces two images (marked as 5.1 and 5.2 in the figure).  A model of the gravitational lens predicts that a background object beyond z=5.5 should produce three images: the two images seen in the Hubble photometry plus another that is hidden behind the bright central galaxy in the foreground cluster.  As a side note, the consistency of the lens model and observations of the galaxy is truly remarkable given the uncertainties in modeling gravitational lenses.

The galaxy cluster was imaged in 10 filters using Hubble, sampling from the optical to the infrared (400 to 1600 Å).  These data were then combined with multi-epoch archival mid-IR imaging from the IRAC camera on Spitzer.  These multiwavelgth observations sample a good chunk of the optical spectral energy distribution (SED) of the background galaxy.  Lo and behold, the galaxy is not detected in any of the blue filters, is barely detected in a filter centered at 8140 Å, and is easily detected in the next filter at  8500 Å.  This sharp rise in the brightness of the galaxy is characteristic of a lyman break galaxy.  Using a bit of technical lingo, this particular galaxy is an i-dropout since it is not observed in all filters blueward of i-band. 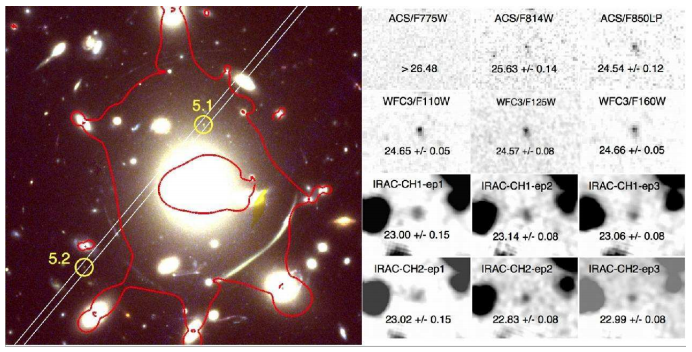 Left: The galaxy cluster Abell 383 warps and magnifies the light emitted by more distant galaxies aligned along the line of sight to the cluster. Right: HST and Spitzer Space Telescope Images of one of the lensed galaxies at various wavelengths. The distant, high redshift galaxy appears to be significantly brighter in the Spitzer images when compared to the Hubble images.

Followup spectroscopy, performed using the DEIMOS spectrograph on the Keck telescope, showed a strong spectral line near 8550 Å in both images.  Given the lens model, the strong break in the photometry blueward of 8500 Å, and the line appearing at the same wavelength in both images, the obvious conclusion is that the observed line is Lyman alpha emitted by the lensed galaxy, implying the galaxy is at an exquisitely well-measured redshift, z=6.027 ± 0.002.  The light we are seeing from the galaxy was emitted only about a billion years after the big bang.

The authors next used the photometry to estimate physical properties of the galaxy and found a stellar mass of 6.3+2.2-1.2 × 109 M⊙, a star formation rate of 3.2±1.1 M⊙ yr-1, a stellar population that appears to be 640-940 Myrs old,  and no significant dust attenuation.  Bursty star formation at later times can also reproduce the red colors of the galaxy at the cost of a poorer fit to the observed photometry.  The inferred mass places this galaxy below M* at z=6, implying that this object samples the low-mass end of the galaxy mass spectrum.  This is precisely the sort of object that is difficult to probe without taking advantage of the magnifying properties of gravitational lenses.

The amazing thing about this galaxy is that even though the universe was very young, it seems that the galaxy harbored a stellar population that had already faded past its prime.  We can tell by noting that the galaxy is significantly brighter in the Spitzer photometry than in the Hubble photometry.  In the rest-frame of the galaxy, Spitzer samples wavelengths redward of the Balmer break at around 4000 Å.  Galaxies showing a strong 4000 Å break cannot harbor too many UV-bright young stars and their light must be dominated by older, redder stars.  Fitting the photometry using templates calculated by assuming a paramaterization for the star formation history and dust content of the galaxy indicates that the bulk of the star formation in this galaxy happened at extremely high redshift (z= 18 ± 4).  While the assumed model for the star formation history is probably simplistic, the conclusion that a significant amount of star formation had to have occurred at even higher redshift is inescapable.  Objects like this one may have emitted enough ionizing photons at z>10 to ionize the intergalactic medium at high redshift, ending the cosmic dark ages.