Figure1: Metallicity maps for clusters Abell 262 and Hydra A. The high metallicity gas (shown in yellow) can be seen extending along the same axis of the cavity system (size and location indicated by black circles). The black crosses represent the cluster center.

The intra-cluster medium (ICM) in galaxy clusters is primarily a hot plasma of hydrogen and helium. A longstanding focus of investigation in astronomy has been the primary mechanism by which metals make their way into the ICM. The enrichment is thought to happen early, primarily by Type II supernova, but how the metals make their way from the galaxies into the ICM has been disputed. One mechanism to mix supernovae ejecta with the ICM is the interaction of galaxies. Major mergers are known to efficiently distribute gas throughout the ICM, but it has been shown that the mergers alone, along with the induced “sloshing”, cannot explain the large radial extent of the metal enriched regions (see Roediger et al. 2010) in the cluster cores. Furthermore, the ICM near brightest cluster galaxies (BCGs) located at the center of cool core clusters can have much higher metallicities than the surrounding ICM, even approaching solar values. In this letter, the authors investigate another mechanism that has the power to eject metals from their host galaxies to large radial extents, Active Galactic Nuclei (AGN). 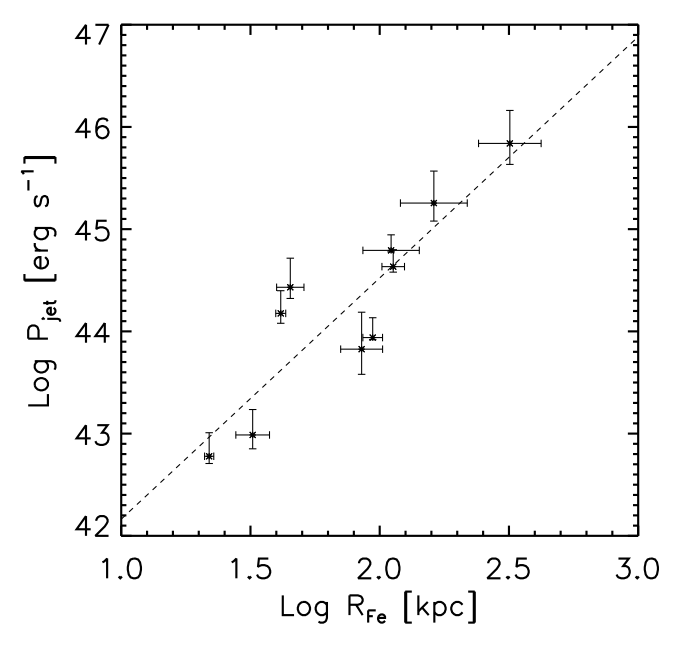 Figure 2: Jet power versus iron radius. The dashed line is the best fit.

BCGs are often the host to radio AGN that can form cavity systems and shock fronts. The authors observe 10 clusters with prominent cavities and a wide range of jet powers.  The clusters also have Chandra X-Ray Observatory imaging deep enough to create metallicity maps (Figure 1). The maps reveal a trend between the power of the AGN and the “iron radius” which the authors define as the maximum radius at which a significant enhancement in metallicity has been detected. The low powered AGN (

) can expel material to tens of kiloparsecs, while large outbursts (

) can launch metals hundreds of kiloparsecs into the ICM. A power law fit between iron radius and jet power gives:

with jet power in units of

(Figure 2). The authors do not make an attempt to measure the power associated with shock fronts and faint ghost cavity systems. The metallicity maps also show a relation between the direction of highly enriched gas and cavity/jet angle.  When plotted, both set of points are consistent with a line of equality (See Figure 4 in letter).

An interesting point made by the authors is that by extrapolating their scaling relation to high jet powers, an AGN with a power equal to

would launch metals beyond 1 Mpc. Mechanical jets with these powers have not been observed. The incredible accretion rates needed for this kind of power are on the order of several tens of solar masses per year onto a black hole.  Such power is very difficult to achieve unless the host galaxies contain black holes with masses much greater than

which are believed to be rare.