Supernovae and Us
The Big Bang produced all the hydrogen and most of the helium in the Universe, but pretty much every other atom, including the ones making up the screen you’re reading this post on, was synthesized in either a star or a supernova. Not only do people like studying supernovae to figure out the mechanism for the production and dispersal of all the heavy elements, supernovae also provide feedback for stirring up the interstellar medium, and impact star formation via their interactions with molecular clouds.

Stages of a Supernova
A typical supernova goes through three distinct stages:

In this series of astrobites, we select papers that focus on supernova remnants in their various stages. Today, let’s check out a paper that studies a supernova remnant in the first (ejecta-dominated) stage.

The Ejecta-Dominated Stage
From the point of view of the ISM, a supernova begins as a point explosion in vacuum – the density of a star is about

, whereas the average density of the interstellar medium is

. The material ejected by a supernova is therefore initially in ballistic motion, and remains in free expansion until the remnant reaches several parsec in size. During this phase, the ejected material dominates the dynamics (i.e the evolution of the remnant) and most of the radiation observed comes from the hot ejecta. 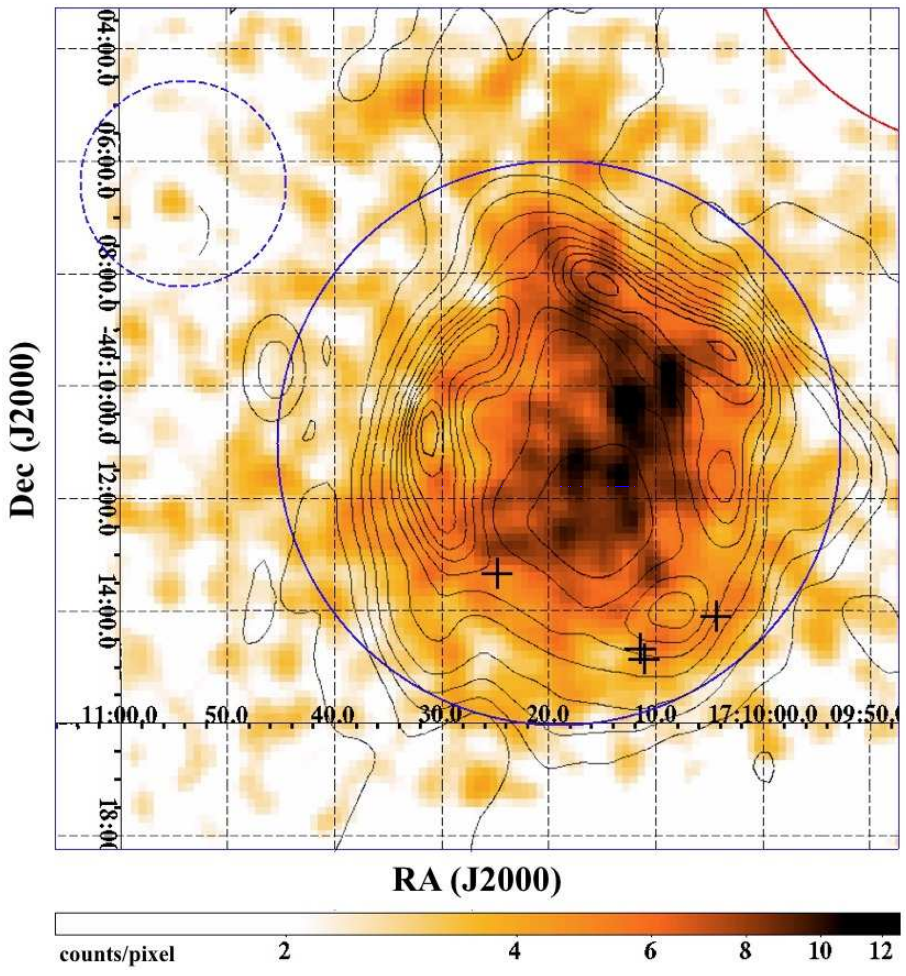 Suzaku X-ray image of Galactic supernova remnant G346.6-0.2 in the 0.2-10 keV band, with 843 MHz radio contours overlaid. The X-rays trace thermal bremsstrahlung from the hot ejecta, while the radio is synchrotron radiation from the expanding forward shock (seen here in projection on the sky)

) gets dumped into about a solar mass of material. Part of the energy goes into propelling the material into the ISM at speeds upwards of

, and the rest into thermal motion of the atoms in the ejecta, making it extremely hot (

). Electrons are flying around passing partially-ionized nuclei and emitting thermal bremsstrahlung radiation. Since the electron temperatures are about 1 keV, most of this is in the form of an X-ray continuum. The electrons occasionally hit a low-lying bound electron of an atom of some element, knocking that electron out of the atom. This causes a higher-lying electron to fall into the lower orbital, emitting an X-ray spectral line characteristic of the element.

Galactic Ejecta-Dominated SNR G346.6-0.2
In the X-rays, individual photons are counted as they arrive at their detector, and are tagged by their arrival time and energy: X-ray imaging detectors therefore automatically serve as spectrometers. You can have your image, and spectrum it too! The authors study SNR G346.6-0.2 in our Galaxy using the Suzaku X-ray space telescope. Suzaku has a set of four X-ray telescopes, each with its own detector covering the energy range 0.2-10 keV. By fitting models to the spectrum, the authors argue that most of the X-ray emission is thermal bremsstrahlung radiation from the ejecta.

The atoms in the ejecta are trying to achieve thermal equilibrium in their ionization states. Whether they manage to do so depends on the so-called ionization parameter

is the electron number density and

is the time since explosion. From spectral fitting, the authors determine that 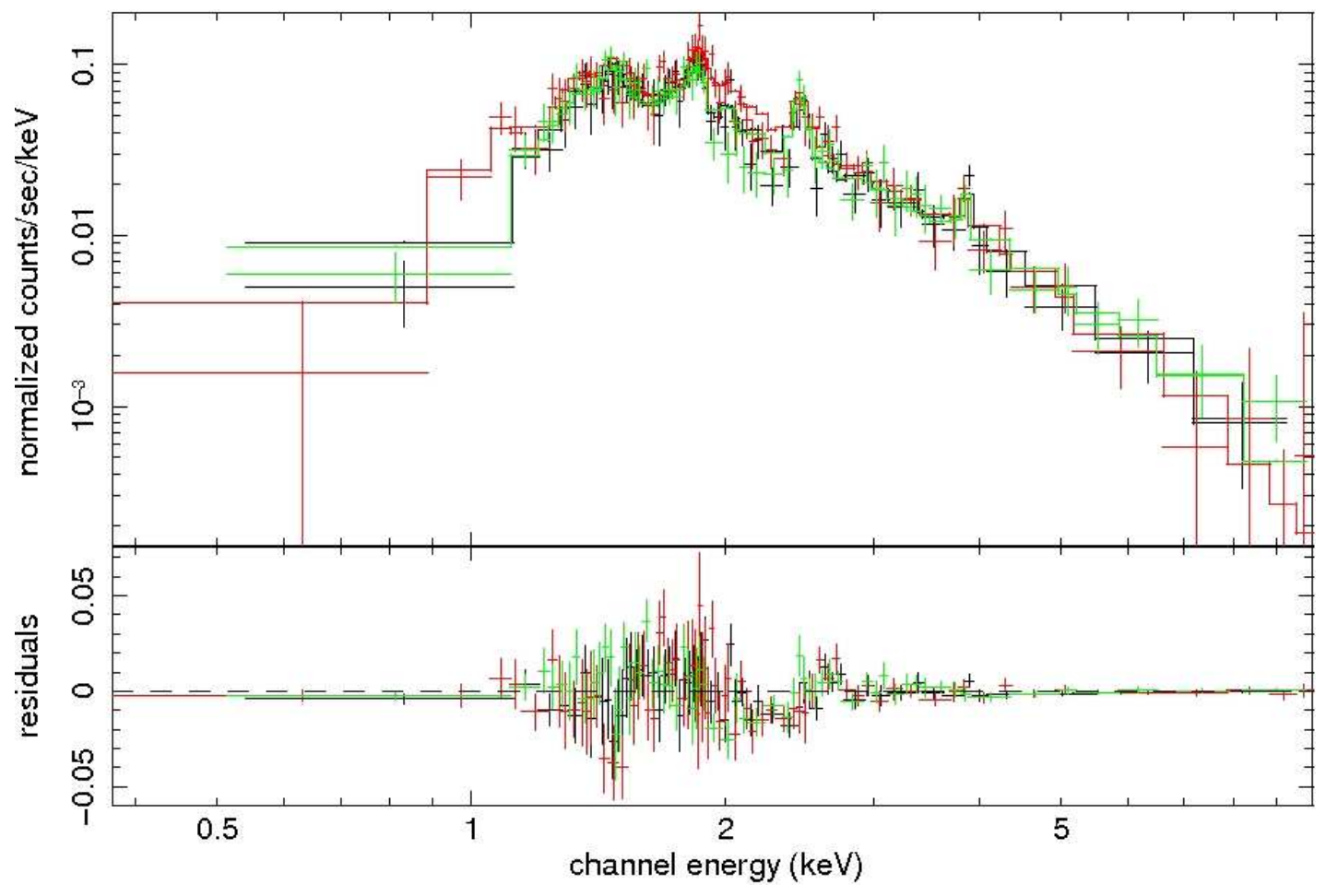 X-ray spectra of the SNR from three of the four telescopes on-board Suzaku (represented by green, red and black). The underlying continuum is thermal bremsstrahlung, while the spectral features are due to elements such as Mg, S, Si, Ca and Fe. The roll over in the spectrum at low and high energies is due to a fall in the detector response, which is forward-modeled together with the spectrum.

Progenitor?
Is it possible to determine the progenitor of the supernova based on the properties of the remnant? X-ray abundance analysis may have the answer. According to theoretical models, type Ia supernovae produce more heavy elements (such as Ar, Ca and Fe), whereas core-collapse events produce lighter elements (such as O, Ne and Mg). By comparing the abundances of these elements in the ejecta, the authors determine that the progenitor of this remnant was probably a type Ia supernova.

Conclusions
By fitting the X-ray spectrum of the ejecta, the authors determine that the supernova remnant is in the ejecta-dominated stage and has not reached ionization equilibrium. Based on emission lines in the spectrum, they are able to fit for the abundances of the various elements produced in the explosion. Finally, by comparing the relative abundance of low-Z to high-Z elements, they propose that this remnant was formed by a type Ia supernova about 11,000 years ago.

What’s next
As this remnant grows older, the forward shock will slow down, and a reverse shock will propagate into the ejecta, heating it up once more. When the ejecta has swept up its own mass in gas from the ISM, the blast wave will decelerate – the SNR has entered the Sedov-Taylor stage.

How Many Years Does it Take to Get to the Center of a Supernova Remnant?