A Week of Good CARMA 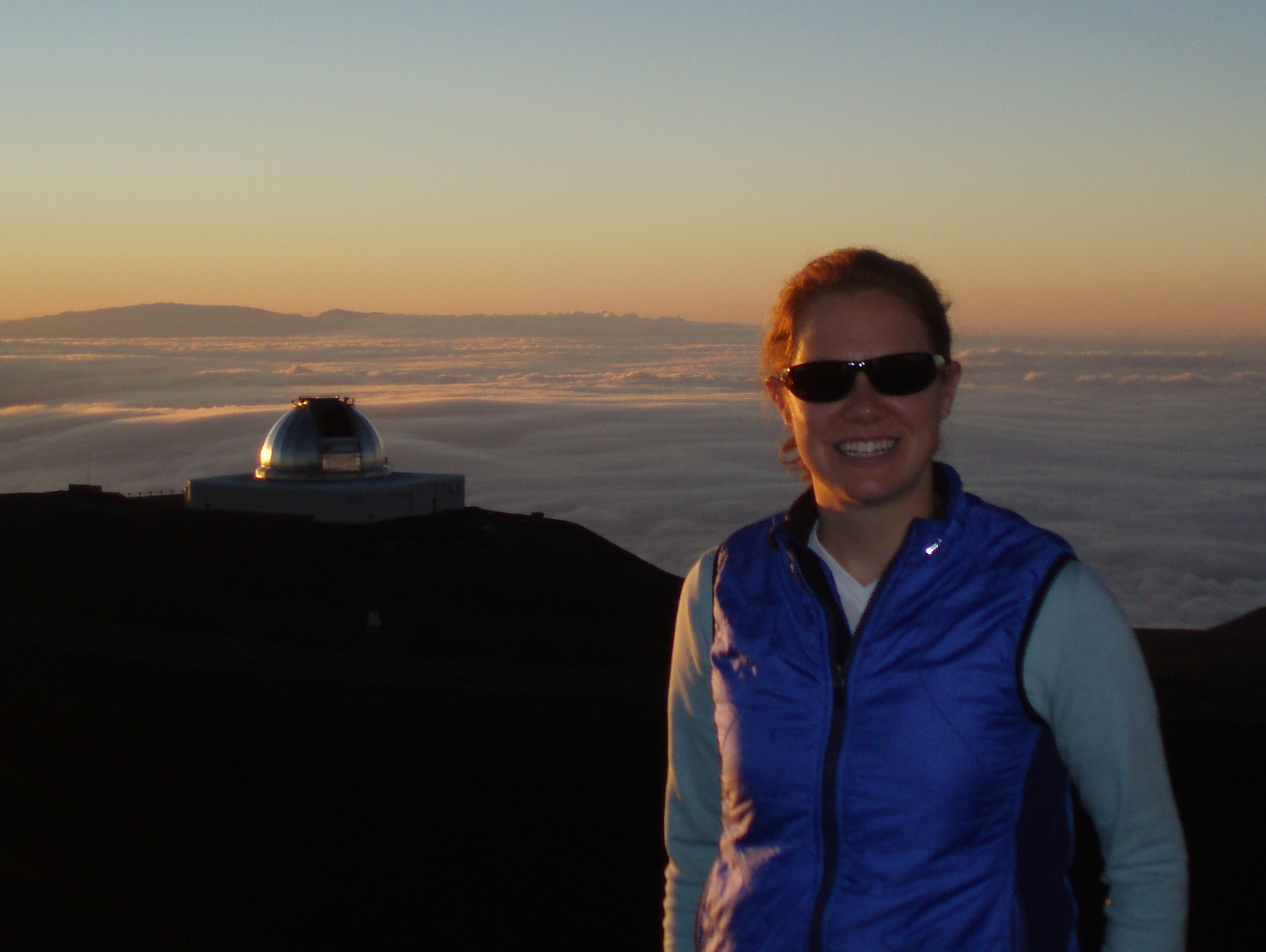 Adele above the clouds at Mauna Kea last year.

Adele is a second year grad student at Yale University, using radio observations to study outflows in star-forming regions. She was recently an observer at CARMA, the Combined Array for Research in Millimeter-wave Astronomy, which is an interferometer in the Inyo Mountains of Eastern California.  To read more about her week at CARMA, you can visit her blog at http://theobservingblog.blogspot.com/, or you can read her retrospective account here:

It has now been a few weeks since I came “down the mountain” after 6 nights as guest observer at CARMA (http://www.mmarray.org/) in the Inyo Mountains of eastern California.  I then drove straight (9 hours, due to mountain pass closures) to Berkeley, where I spent two days at the CARMA Science Symposium.  There, I presented a poster about my research on the star-forming region NGC 1333. In fact, a good portion of the Symposium participant list turned out to be a “who’s-who” of experts in studying this region, so I left with a lot to think about.

Several days after returning to school, I cut back my intake of caffeine and sugar, caught up on sleep, and my body finally adapted to East-coast time.  I spent some time to evaluate my experiences, and I’ve put together a list of the most important lessons learned on my trip:

1. Take notes and be organized (easier said than done). The first few nights observing, I was learning and seeing everything for the first time.  Fortunately, I was matched with an experienced observer who first showed me around, taught me how to choose what tracks to run, and then let me try commanding the telescopes myself.  The final nights, I was the “experienced” observer, and I had to show the new observer what I had learned.  (Actually, he picked everything up quicker than I had, and even taught me a few more things.)  What helped me the most was writing down as much as I could whenever I learned something new, so that I could return to my notebook and recall what had been done during previous nights.  Also, I had learned a lot at the CARMA Summer School in July, so if you’re interested in observing somewhere, see if they have a summer school to teach you the basics. 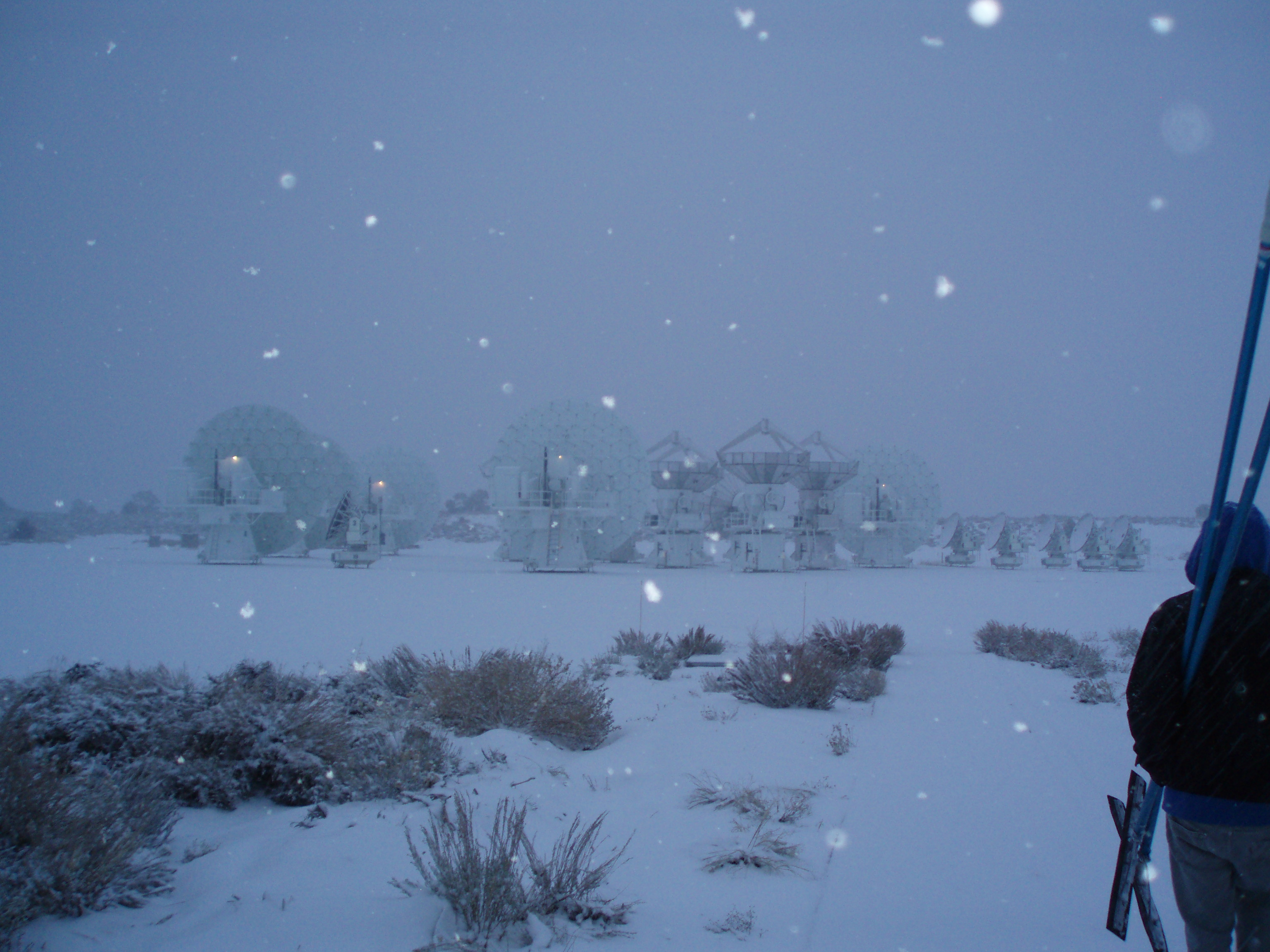 Observing isn't always about clear skies and beautiful sunsets. Sometimes you have to deal with snow and ice.

2. Sleep when you can, because when the alarm sounds, it’s go-time. Ideally, CARMA observes twenty-four hours a day, which means that CARMA observers are on duty during that time.  There were two of us at all times in the control building (except for our daily trip to the valley for lunch), and when an error occurred, an alarm sounded and we rushed to the computer to see what the alarm said.  The true test of wit is if you can successfully type computer commands at 4 am, sleepy-eyed and wearing your pajamas, alarm blaring.  The greatest sense of accomplishment came when that alarm quieted, silently telling us that we’ve done a good job.

3. Meet as many people as you can, ask them about their job or their research. I was happy to meet dozens of new people within such a short time, including the scientists and support staff at CARMA, my fellow observers, and the others at the Science Symposium. I learned that it takes a huge crew to keep a facility like CARMA operating: a talented chief who powered the whole crew, skilled maintenance people to keep the antennas functioning, and a team of volunteer observers (often students and post-docs), just to name a few.  At the Symposium were diverse astronomers who have used CARMA in novel ways to do a wide range of science, from star formation to galaxy evolution.  Each person I met had something to teach me, so I tried to listen well, and now I’m working on keeping in touch.

4. Have fun and enjoy the beauty of it all! Work doesn’t have to feel like, well, work.  I often find myself in situations where I think, “Wow, I would never have guessed that grad school involved this!”  Sometimes in grad school, “this” has meant dreadful hours of studying, but not here.  By “this”, I mean that I got to spend a week eating out of an endless bowl of candy, staying in the Inyo mountains away from all city lights, “playing” in the snow (this entailed shoveling snow off of antennas at midnight in a driving snow storm, but the next day as the antennas dried out we took a break to bike and sled in the fresh powder!).  Grad school can be what you make of it, and I’ve been fortunate to “make” plenty of fun opportunities for myself (thanks in large part to a supportive adviser).

5. One more lesson, that I’m not proud to include, but should be shared.  I learned to synchronize my clocks to Eastern time when I returned east.  On the day I returned to school, I showed up to class at 9 am — west coast time, which is 12 pm east coast time.  I had unintentionally missed both classes!  Hence the line at the beginning of this post about “finally adapting to East-coast time.”