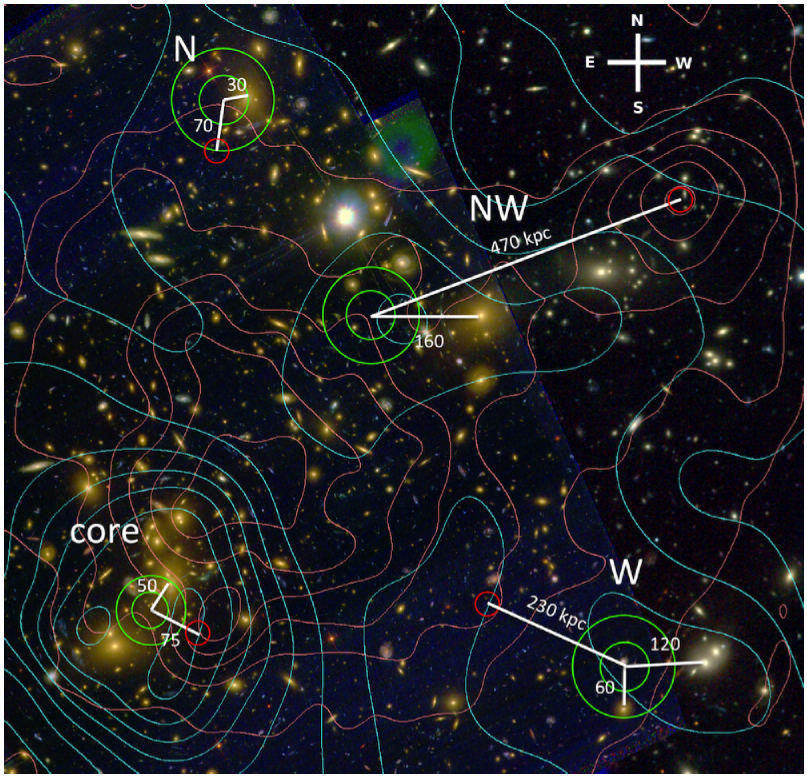 The current theory on how giant galaxy clusters are formed is through mergers with other groups of galaxies. This is the hierarchical merging theory of structure formation. Abell 2744 is just one of many examples of clusters involved in a celestial collision, but closer inspection shows that this cluster group is far more interesting. Back in 1998, cluster collisions took a turn for the best when astronomers looked at the Bullet Cluster in X-rays and through the lens of gravity itself to show that the hot X-ray emitting gas was displaced from the distribution of the majority of the mass (as shown by weak lensing). Overnight, the Bullet Cluster became the dark matter poster-child and is an excellent laboratory in which to study the nature and interaction of dark matter.

In this study, the authors use a wide range of observations to study Abell 2744 which is a complex merger of four distinct systems labeled by their positions, North, Northwest, West, and Core.  In all, the system is nicknamed the Pandora Cluster (a fitting name for the strange system), and the team produces the most detailed mass map to date of the system. Weak lensing observations were carried out using the Hubble Space Telescope, Very Large Telescope, and Subaru Telescope.  They also performed independent analysis of archival Chandra X-ray imaging. 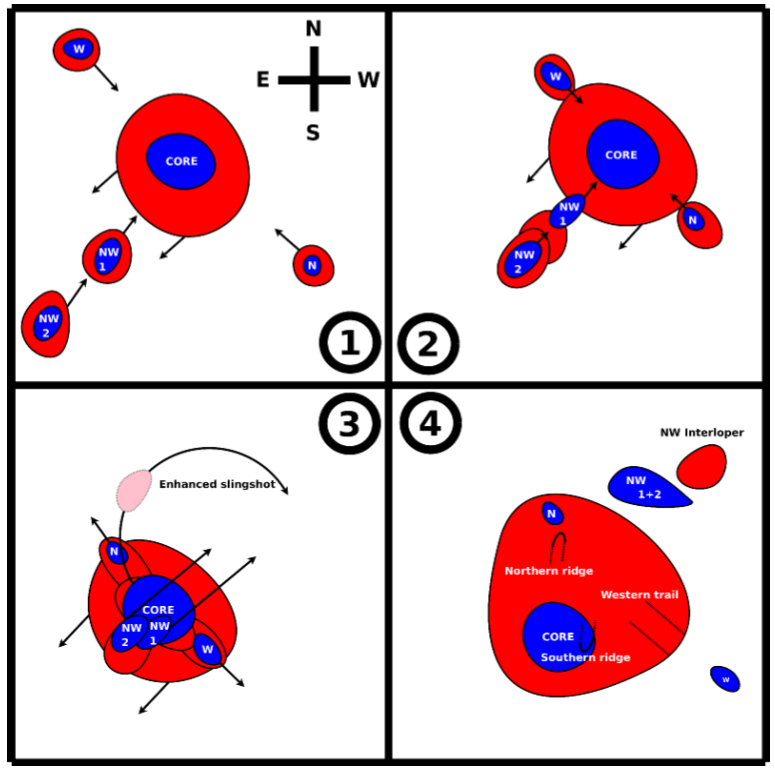 So what happens when more than two giant clusters collide? You get ‘ghost’, ‘dark’, ‘stripped’, and ‘bullet’ clusters leaving the wreckage after impact. Hold on… Ghost clusters!? The authors explain, “The interloper thus appears to be an X-ray feature with no associated dark matter or galaxies, and we therefore dub it the ‘ghost’ cluster.” Alright, so how about a ‘dark’ cluster? “There is also a clear separation between the peak of the (Northwest) mass clump and any cluster member galaxies, so we call this the ‘dark’ cluster.” To the west of the system lies a group of galaxies with a weak lensing signal but no X-ray gas which is labeled as a ‘stripped’ cluster. Pandora sounds more like a haunted house than a cluster merger!

As shocking and messy as this system appears, the authors attempt to give an interpretation of just what is going on in the Pandora Cluster. They explain that what we see now is the result of a near simultaneous double-merger. The first merger occurs in the NE-SW direction. The western clump moves past to main cluster and, as it does so, has its intra-cluster medium removed by ram-pressure stripping. The second merger occurs in the SE-NW direction. This interaction is likely more complicated as it may have consisted of more than two clumps infalling along a filament. As the smaller clumps are accelerated by the main cluster, a “slingshot effect” (Owers et al. 2011) can occur within the changing potential of the larger cluster which can throw the gas component ahead of its associated dark matter clump forming the ‘ghost’ cluster. For a detailed description of how these scenarios are inferred, I leave the reader to the original paper. There are also many more figures presented in the original work highlighting the detections of the ‘ghost’ and ‘dark’ clusters that are worth a look.