Supernovae, the extremely luminous explosions that are the catastrophic deaths of stars, are used directly and indirectly by astronomers of many disciplines. Cosmologists use type Ia supernovae (different types explained in a moment) as powerful “standard candles” to probe the farthest rungs of the cosmic distance ladder. Astrochemists studying the interstellar medium (ISM) track supernovae feedback of heavier elements that enrich the ISM. Astrophysicists working on star formation look for evidence of supernovae-induced collapse of molecular clouds. If supernovae are such ubiquitous tools, then it must be essential to understand the actual supernova (SN) mechanism itself.

Figure 1, from Li et al 2010. These pie charts show the observed fractions of each type of supernova in a volume-limited sample.

In a recent colloquium at the Center for Astrophysics, Dani Maoz joked that “there are two types of astronomers: those that classify everything into two types, and everybody else.” Although those who study supernovae in particular have an affinity for classification, much useful information can be gleaned from a consistent classification scheme. Supernovae (SNe) have been traditionally classified based upon their optical spectrum and the strength of certain spectral lines. At the first level of the hierarchical classification scheme, we have type I and type II SNe. Type I SNe do not show hydrogen in their spectrum, while type II SNe do. Type I SNe can then be further divided into type Ia and type Ib and type Ic, although sometimes it is difficult to distinguish between Ib and Ic and so they are lumped together under “type Ib/c.” Type Ia SNe do not show hydrogen or helium in their spectrum, but are dominated by strong silicon absorption lines. Type Ib SNe show helium lines, while Type Ic SNe show neither helium nor hydrogen. While type I SNe are further sub-classified based upon the presence or absence of certain spectral lines, type II SNe are further sub-classified based upon their time evolution of their luminosity (called a “lightcurve”). Type II-P SNe show a “plateau-like” lightcurve after peak while Type II-L show a more linear decline after peak.

Figure 1, from the 2010 paper by Li et al., Nearby Supernova Rates from the Lick Observatory Supernova Search, shows the relative fraction of observed supernova types. From the figure, we can see that type II SNe (those with hydrogen in their spectrum) are the most common, and of type IIs, type II-P SNe are the most common, thus making up roughly 40% of all SNe. Although Type Ia SNe tend to get a lot of attention because of their use as standard candles, they are not the only supernovae out there.

What do all of these different types mean? Essentially, every other supernova apart from Ia is a core-collapse supernova, which results from the collapse of a massive star once it finishes burning it’s fuel through nuclear reactions. The progenitors of type II supernovae retain their hydrogen envelope, and thus exhibit strong hydrogen lines in their spectrum, usually with strong P-Cygni profiles.

In 1987, the nearest SN since the invention of the modern telescope exploded in the Large Magellanic Cloud, and from it astrophysicists have learned an incredible amount. Unfortunately (or fortunately, depending on your perspective), this explosion, SN1987A, was a weird event. Deep pre-explosion images detected the progenitor as a blue supergiant star, similar to Rigel, the blue star in the constellation Orion (and the brightest star in Orion, despite the

Orionis misnomer). However, most type II-P SNe are believed to be from red supergiants, like Betelgeuse, the red star in Orion. There are only a handful (~5) of likely blue-supergiant explosions (that have been published). Blue supergiants are large stars that have a spectral type of O or B, meaning that their effective temperature is very, very high. Red supergiants are also very large stars, but their effective temperature is much lower, usually in the spectral class of K or M. (Our Sun is a G star, which is hotter than K or M).

Which brings us to a new paper on the arXiv by Kleiser et al., Peculiar Type II Supernovae from Blue Supergiants. The authors investigate the supernova SN 2000cb, which likely originated from a blue supergiant progenitor. 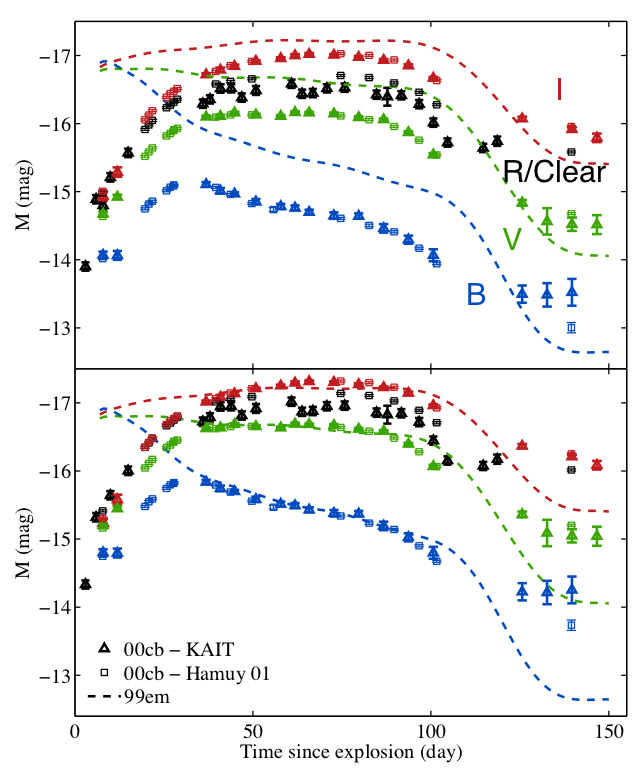 While SN 2000cb shares some characteristics with the few other Type II SNe that are believed to be from blue supergiant progenitors, like SN 1987A and SN 1998A, there are significant differences. Both the lightcurves of SN 1987A and of SN 2000cb show lightcurves with a slow rise time, a plateau-like stretch, and shallow drop-off. Blue supergiant SNe traditionally have longer rise times than normal type II-P SNe. Most of the uniqueness of SN 2000cb is in the spectra. The authors find that SN 2000cb had much deeper P-Cygni absorption troughs for

compared to SN 1987A and SN 1999em(another likely blue supergiant SNe). The equivalent widths (a measurement of the strength of the line) are about twice that for SN 1987A at late times.

The authors calculated the reddening for this SNe under the assumption that all SNe II-P have a similar color evolution during the photospheric phase (the “plateau” in the lightcurve, see Figure 2). However, an unrealistic amount of reddening is required to be invoked to account for the light-curve to match the prototypical SNe II-P lightcurve. Since the object is on the outskirts of the galaxy, they assume that SN 2000cb suffered essentially no host-galaxy extinction.

The expansion velocities measured from the hydrogen absorption features are very high, 18,300 km/s for

. Although these hydrogen line velocities are very high, others have calculated that non-local thermodynamic equilibrium effects could be responsible for why these lines give faster velocities than the actual photosphere.

A recurrent question in supernovae research is “what powers the lightcurve?” The authors conclude that the slow rise time of SN 2000cb disfavours the typical answer for type II-P, which is an amount of energy initially deposited thermally by the shocks during the initial explosion. Instead, they conclude that the lightcurve is powered by the radioactive decay of

, which is the same mechanism for SN 1987A, and the hydrogen-stripped type Ib and Ic SNe.

Additionally, if the progenitor star was compact, then more of the explosion energy would be spent on expanding the star from a small radius rather than powering the rising portion of the lightcurve, creating a slower rise time.

The authors use the stellar atmosphere code PHOENIX to model the spectra and determine ejecta masses for SN 2000cb. They determine an ejecta mass of 10 solar masses and explosion energy of

ergs. Because the expansion velocity of the ejecta of SN 2000cb was so fast (determined from the spectral lines), there must also be a correspondingly larger amount of ejecta mass in order to “harness” the radioactive heating from the 56 Ni (ie, trap the gamma rays emitted by it). 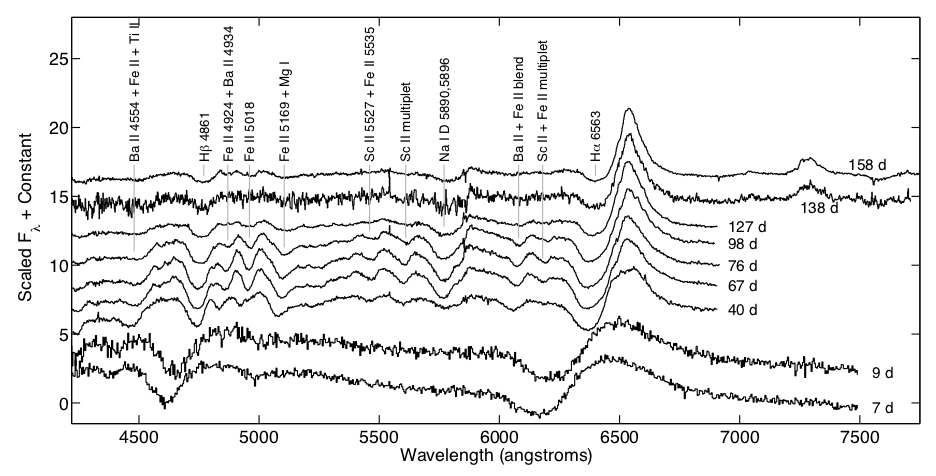 Taking all of these lines of evidence into account, the authors conclude that SN 2000cb was a peculiar type II SNe whose progenitor was a compact blue supergiant star. This paper tries to tie these peculiar blue supergiant SNe back to the general Type II-P sample, since these are the most common SNe. Combined with the results of the Lick Supernovae Search (the earlier link) that authors find that blue supergiant supernovae are ~4% of the normal type II-P, which translates to a rate of ~2% of all supernovae.