Many galaxies are believed to hold super-massive black holes (SMBHs) at their centers–for example, Sagittarius A* is believed to be an SMBH in the center of the Milky Way.  When two SMBH-containing galaxies merge, the two SMBH’s are thought to slowly spiral into the center of the new merged galaxy as a result of dynamical friction with gas as well as gravitational interactions with nearby stars.  Finally, the two SMBHs may merge into one, emitting an intense, anisotropic burst of gravitational radiation, which we eventually hope to detect with to-be-built instruments like LISA.

Due to momentum conservation, the newly merged black hole is “kicked” in the opposite direction of the gravitational wave burst.  This kick can be very large, giving the SMBH a new velocity that can be up to about 4000 km/s, which far exceeds the escape velocity of the galaxy itself.  This “recoil velocity” depends sensitively on the mass of the two merging black holes, as well as their spin magnitudes and relative orientations.  In the case that the recoiling black hole does not receive a kick which exceeds the gravitational well of the galaxy, then the recoiled black hole will, at least on some timescale, be displaced from the center of the galaxy.

In today’s astrobite, this fascinating phenomenon is studied using a large suite of hydrodynamic simulations (run using the SPH code GADGET— look for an upcoming astrobite on tips for how to install GADGET for your own use!).  The authors explore a wide range of galaxy merger types, as well as a range of kick velocities.  Please see the figure for an example of black hole trajectories in one of these models, for different kick velocities. 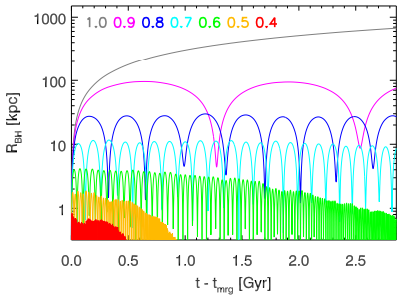 Black-hole trajectories in a gas-poor merger model. The different colors denote different ratios of the kick velocity to the escape velocity.

First of all, the authors find that the black hole trajectories depend sensitively on the gas content of the merging galaxies.  When the galaxies are first merging, if they are gas-rich, then this gas can shock and pile up at a central dense cusp, forming a steep potential well that makes it more difficult for the kicked black hole to escape.  On the other hand, gas-poor galaxies have their mass tied up in stars, which simply flow collisionlessly past eachother and do not form as strong a potential well at the center of the galaxy.  Higher gas content also allows for greater dynamical friction which further inhibits the black hole trajectory.

The authors also determine two physical situations which could allow observers to find a spatially or kinematically displaced SMBH.  The first is when the black hole is kicked at near the escape velocity; in this case, the black hole retains a small accretion disk around it; this would appear as a slowly fading AGN in x-ray bands.  The next is in an intermediate-kick case where the black hole periodically enters the gas-rich galactic center, picking up new material to accrete.  More generally, the authors find that adding the physics of recoil kick to the black hole merger changes the lifetime of the AGN, whether by shortening it by removing it from the rich galactic-center environment, or sometimes lengthening it by giving it new material to accrete if the galactic center is gas-poor.

Finally, the authors find that black hole kicks can change the evolution of their host galaxies.  For example, recoil kicks introduce more scatter into the

relation.  This is due to the fact that, as noted above, the gravity-wave kick depends sensitively on aspects of the merger which are not directly captured by the

relation (e.g. the relative orientation of the black hole spins).  Additionally, a displaced black hole can allow cold, dense gas in the center to remain undisturbed by AGN activity, leading to significant increases in star formation in the central region.  Quoting the paper, “The simulations with recoil and without BHs have about twice the central [galactic] density of the stationary-BH case, which corresponds to a 3% increase in total stellar mass.”

In summary, today’s astrobite authors find that general relativity’s prediction of large black hole merger kicks adds another rich chapter in the complex (and poorly-understood) story of how supermassive black holes and their host galaxies co-evolve.