My first night on the mountain, I observed the full moon with my binoculars.  I had arrived a day early for my observing run in Chile, just in case anything went wrong in the process of getting here.  This is a totally valid concern, because getting to Las Campanas Observatory from Cambridge, Mass. is about a 24 hour process, involving three flights and a two hour car trip.  (Ian also observed here earlier this year on the twin to the Baade–the telescope I uesd–and wrote this post about it).  Because I had that first night free, I was able to spend my sweet time admiring the Atacama Desert in late afternoon, the sunset over the Pacific and the full, bright Moon as it rose with the twilight.  Ah, to be an astronomer!

Then I stayed up and graded student lab reports until 3am so that I’d be on observer time, which involves sleeping during the day and working evenings, nights and some afternoons too (it turns out this is relatively easy for a graduate student to do, although I’ll admit the hours between 4 and 6am were less than stellar).  You might find it entirely obvious that being an observational astronomer involves pulling regular all-nighters, but this never occurred to me.  Then they told me you often had to start looking things over in the afternoon and I naturally wondered how you got enough sleep.  The answer, of course, is that you don’t: this was the first thing that made me aware of how little I knew about observing. 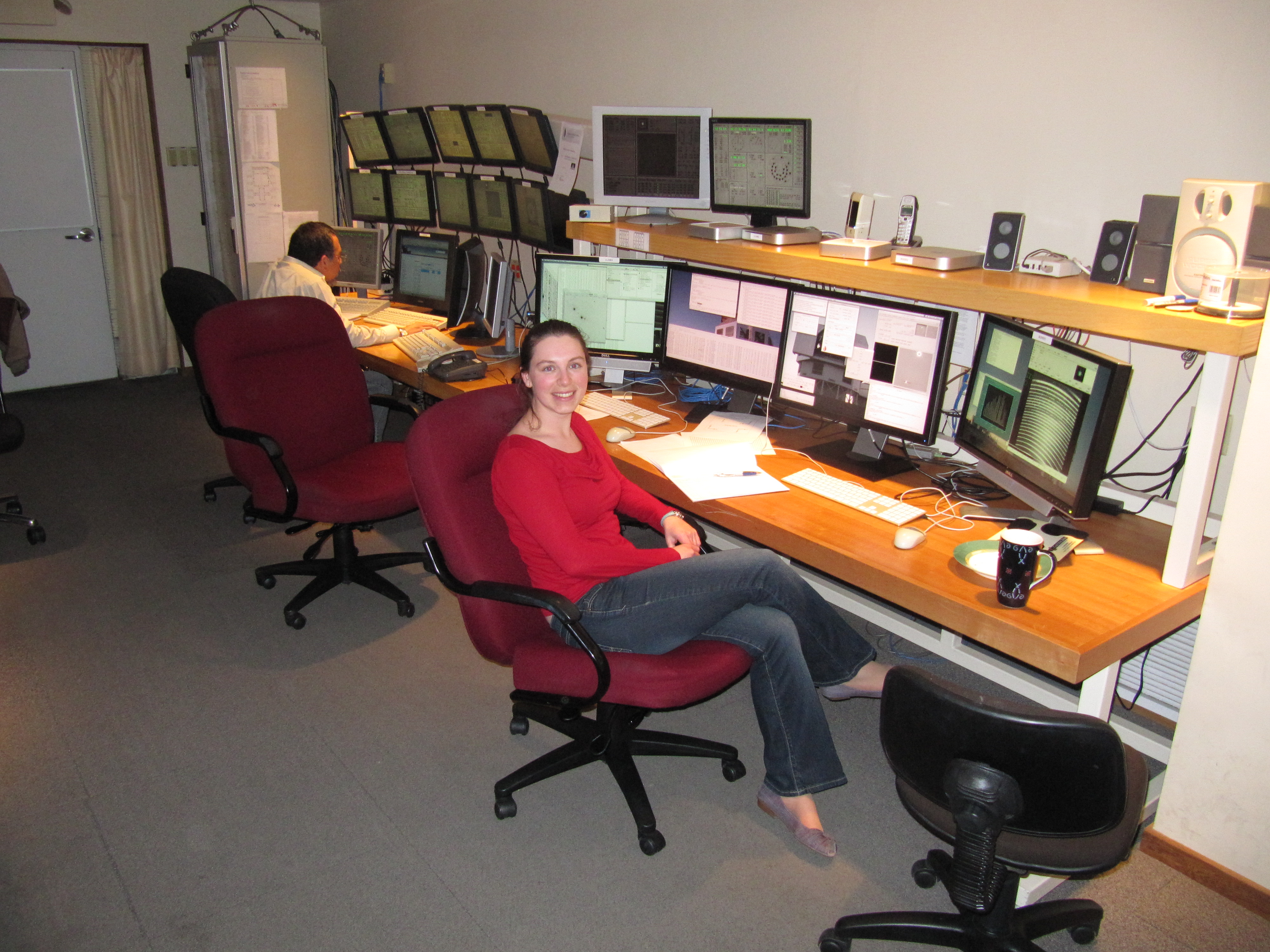 The control room: what observing is really like. See the large shiny image on the far right screen? That's my data!

My second epiphany was that it takes a whole lot of work to get ready for an observing run, even one that’s just two days long!  Not that I expected to be sitting and admiring the stars all night: it’s just that I never thought about the planning aspects.  The questions to ask first are “What am I going to look at?”  and “For how long am I going to look?”

What do we want to observe?  We didn’t have enough time to look at everything we wanted, so we had to consider what’s most important for furthering our science goals and what would result in a good project for me if we didn’t get any more time at all.  Well, what can we observe?  Some objects won’t be up at all during any given run–either it’s in the wrong hemisphere or it’s up during the day instead.  And even if it does rise at night, it might not be high enough in the sky: objects at lower altitudes are seen through more atmosphere and are thus extincted more (they are at higher “air mass”).  Generally, we just worked with the “what’s directly overhead?” principle and observed objects that were near zenith (but not too near! the telescope can’t actually point within about 5 degrees of straight up).  Sometimes we would chase an object that was only up for a little while because it was especially interesting; then we observed at higher airmass.

How long do we look at each object?  The amount of time we exposed for was determined by what signal to noise (S/N) we need for our science.  I determined this by adding noise to a sample spectrum and seeing when my measurements started to change (and then we erred on the side of caution).  Even though I had estimated exposure times for each object, we still had to look at each spectrum immediately after taking it.  First, we checked that the detector wasn’t anywhere near saturating because this would make our science difficult if not impossible.  Second, we checked that the S/N was about right, because if not we needed to take a second exposure.

My two nights were primarily strings of a science-lamp-telluric sequence.  First, we looked at our science targets, as discussed above.  Then, we took a spectrum of a lamp to use as a wavelength calibration because the translation from pixels to wavelength changes (by a little bit) depending on the orientation of the telescope.  Lastly, we looked at an A star, which are well-understood, common, and bright stars; this we will use to correct for atmospheric (“telluric”) absorption.  At the beginning and end of the night, we also took images to determine where the spectrum lies in the 2D image, what the detector reads when there’s no signal and how the detector responds to a uniformly illuminated field.  In the end, I’ll have to take all of these things into consideration.

Maybe this doesn’t sound especially exciting, but at dawn after twelve hours of sitting in that control room when I went out to watch the telescope close for the day, I couldn’t have been more enthusiastic.  If you want to know why, all you have to do is look below! 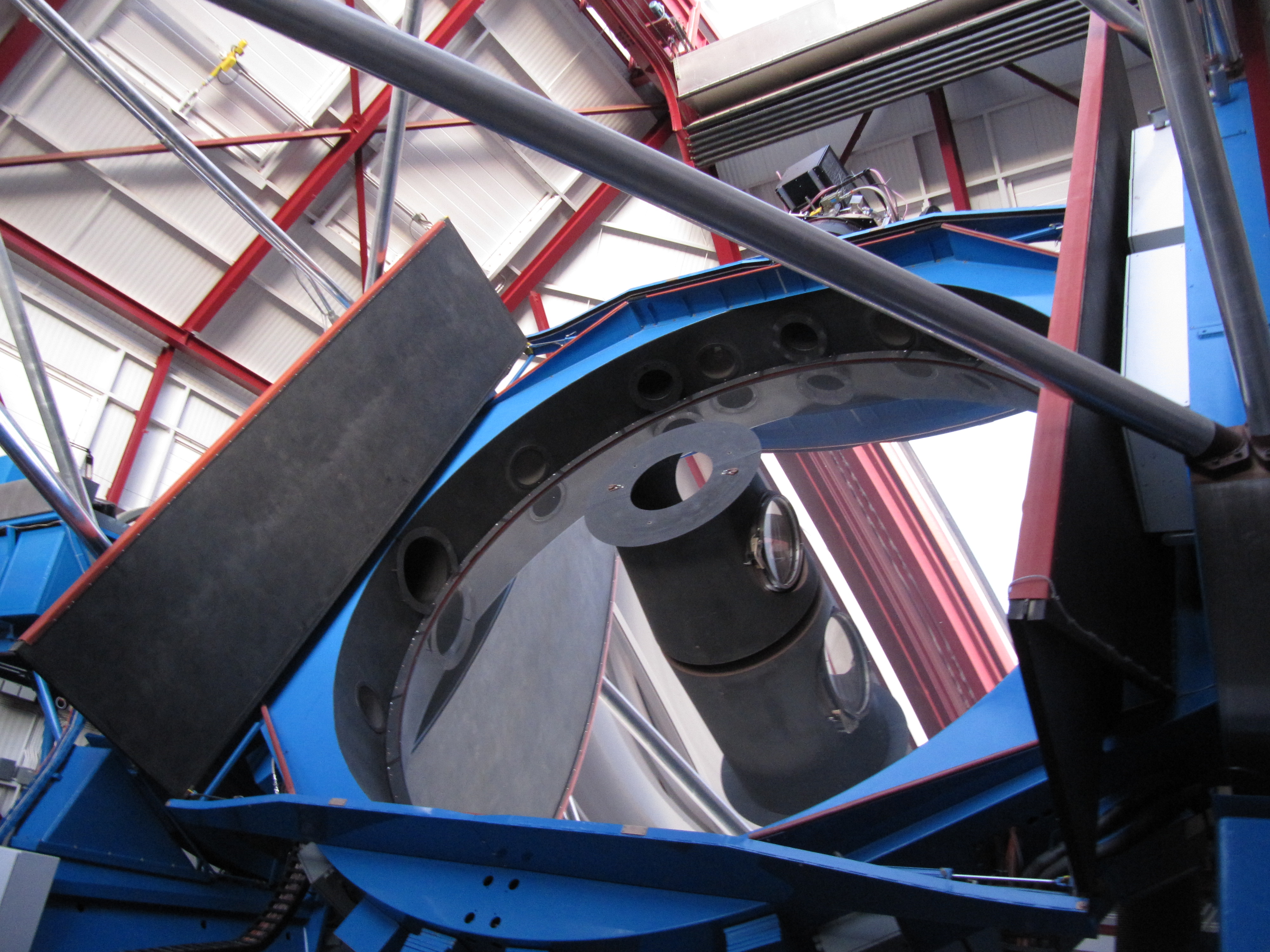 The 6.5m mirror on Baade. FIRE, the instrument I used, is the small black box with wires sticking out of it attached to at the top (I think!). The telescope operator was kind enough to give us this look. 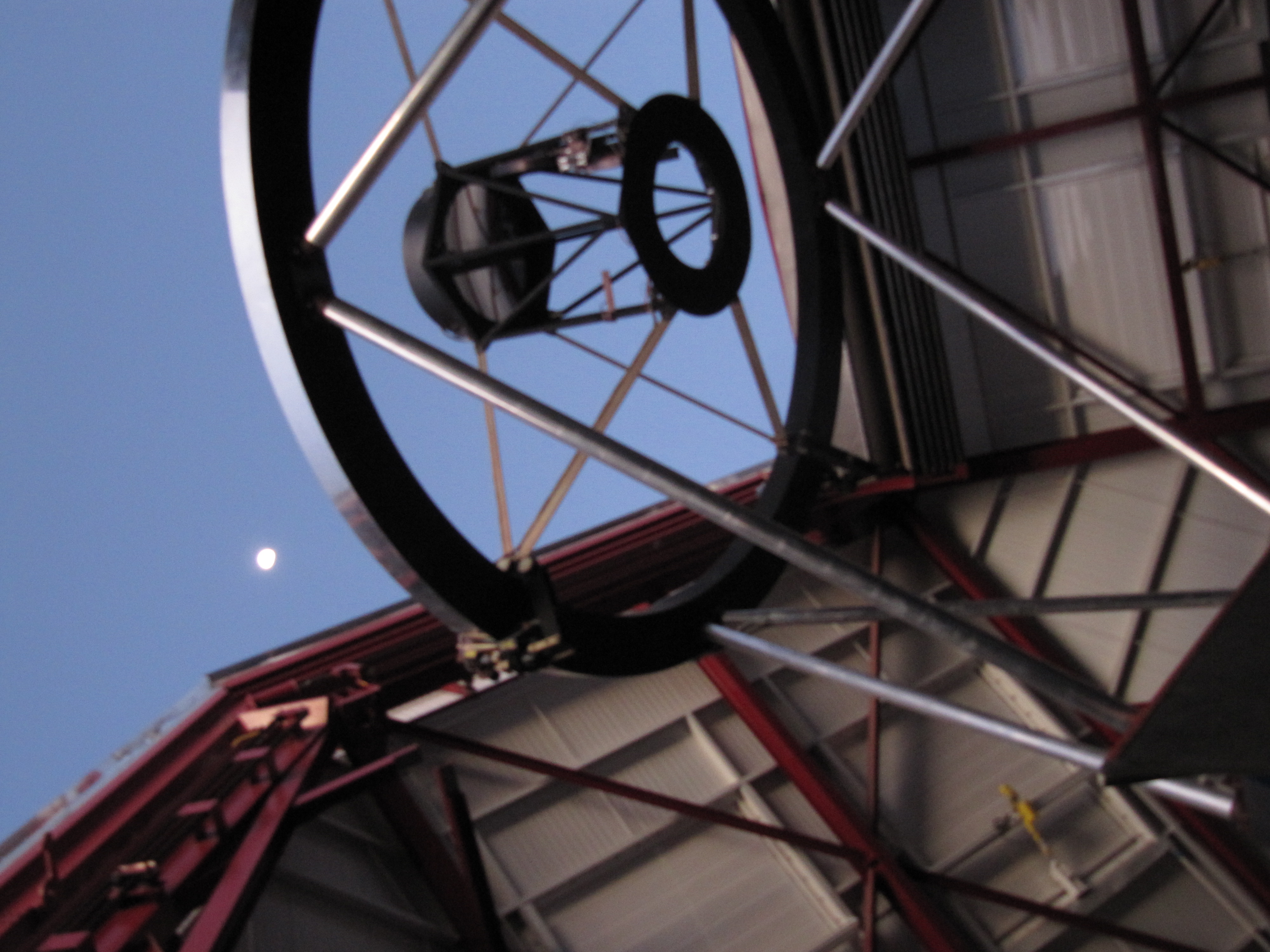 The secondary mirror with the moon in the background as viewed from the dome.