Lolcats and Comets: using image searches to do science

The internet contains a lot of information and only a tiny bit is relevant to astronomy. This “small part” requires large efforts to organize and centralize the data, but not everything is integrated into these databases. For instance, you can find many astronomical images from talented photographers and amateur astronomers who aim their lenses skyward. A search engine may find these pictures and some clever computing can extract interesting information from the conglomerated images. This paper showcases this sort of unwitting citizen science to “rediscover” the orbit of Comet Holmes by modeling the behavior of astrophotographers. In essence, the authors use the fact that people take pictures of interesting objects (such as Comet Holmes rather than empty space) to trace out the comet’s orbit.

The image search for the comet returned many pictures, not all of them strictly relevant. For panel (k), the authors suggest the caption: "Iz commut in heer?". Figure 1 from the paper.

The authors used the Yahoo! image search engine to find thousands of pictures of Comet Holmes along with some other, less relevant images (see above). After removing duplicates, the authors had to cull for the astronomical images and determine where the comet was in the sky. This is a non-trivial problem that gets harder when you have thousands of images – too many to go through personally. Instead, you must use some sort of computer algorithm to do the job for you. For astronomy pictures, astrometry.net does just that and is able to determine what piece of the sky the picture is from. The problem is solved similar to how our brains pick out constellations: pattern recognition. Fixed stars define patterns in the sky and a clever algorithm can identify and locate these patterns. 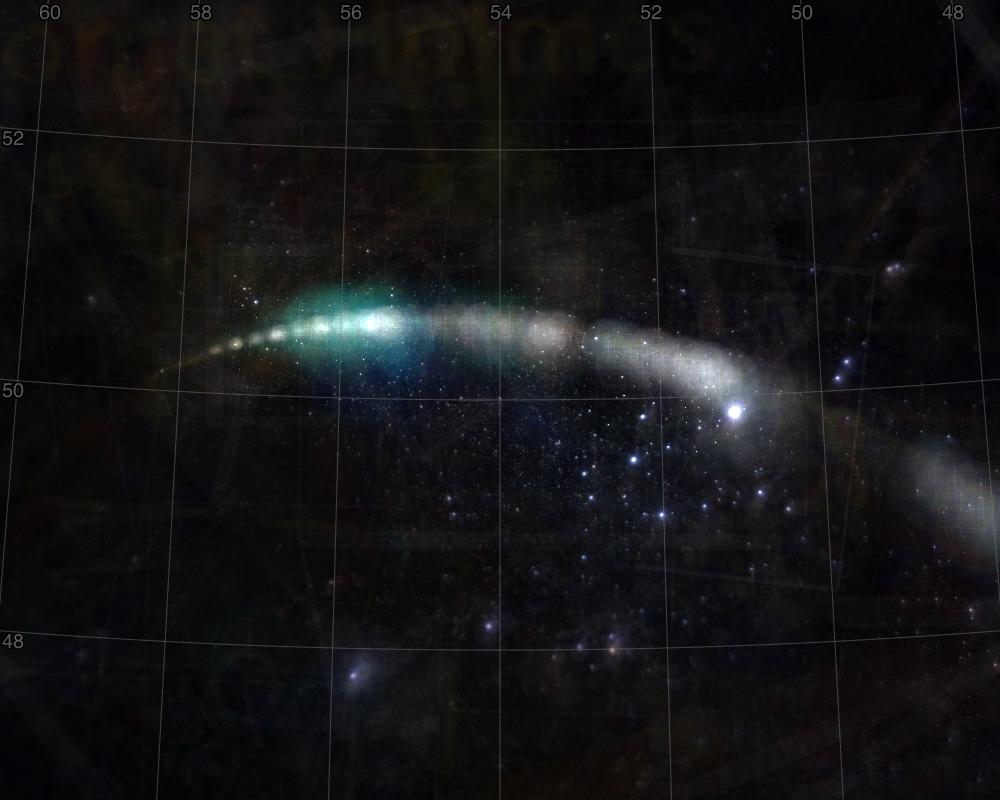 Co-added images trace the comet's orbit on the plane of the sky. Figure from http://www.astro.princeton.edu/~dstn/

After determining where each image belongs in the sky, the next step is to ensure that the comet is actually in the image and determine the time it was taken. To do this, the authors use Monte-Carlo Markov Chain (MCMC) techniques that generate many possible orbits while testing the image information. MCMC is commonly applied for parameter fitting problems when it is important to know the errors on your estimates. To find the Comet’s orbit, the authors uses the previously known orbital parameters to focus their search, but the Yahoo! images seem to match pretty well (see below). 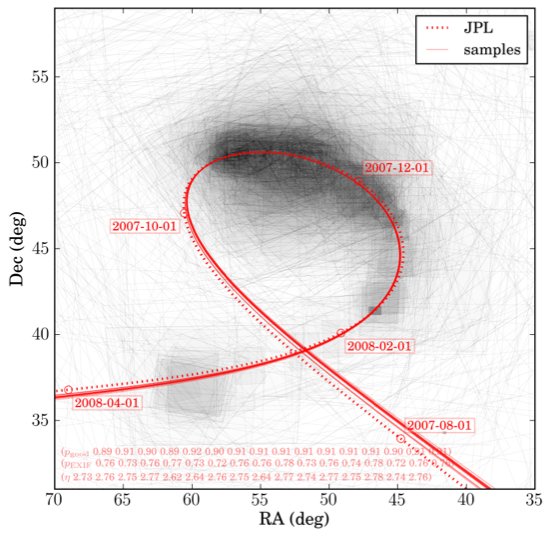 The comet's orbit calculated from the web images (solid red) and literature (dotted red) plotted over the co-added web images. Each calibrated picture is outlined in gray. Figure 6 from the paper.

On a certain day in April, one or more papers with a certain spin tend to appear on the Arxiv. They are a small part of similar content that appears on the internet that day. While this paper is certainly fun, the methods and analysis showcased are quite powerful.