Figure 1: Illustration of the differences between microquasars and quasars. Credit: Mirabel & Rodríguez, Nature (1998)

Microquasars
Microquasars, or radio-emitting X-ray binaries, can be considered to be smaller analogs of quasars (see definitions in the glossary). Like quasars, microquasars generally have a pair of radio jets emitting from the poles of an accretion disk around a compact object. But for a quasar, the central object is a supermassive black hole of millions of solar masses, whereas for a microquasar, the compact object is a black hole or a neutron star of only a few solar masses. This smaller size has an important effect: evolution timescales are much shorter for microquasars than they are for quasars. The shortened timescale plus microquasars’ comparative nearness to us (inside our galaxy) make them excellent laboratories for learning about quasars.

SS433
The first microquasar discovered is also one of the most unusual ones yet observed. SS433 consists of a black hole and a companion star orbiting each other with a period of 13.1 days. In addition, SS433 exhibits relativistic jets which are expelled at ~26% of the speed of light and precess around an axis once every 162 days, tracing out a corkscrew pattern in the process. It is housed in the center of the supernova remnant W50 (see Figure 2). 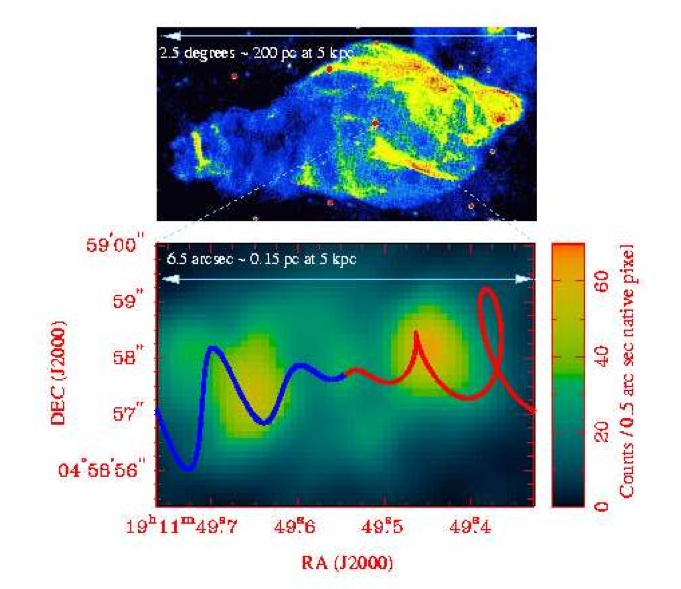 Figure 2: The top image shows radio nebula W50, and the bottom image shows the precessing jets (with corkscrew pattern indicated) of microquasar SS433 which lies in the center of it. Credit: Migliari et al. (2002)

The Problem
It is generally agreed that SS433 must interact with the nebula W50. One would expect a typical supernova remnant to expand spherically, whereas W50 is greatly elongated along the precession axis of SS433’s jets — suggesting that the jets are distorting the remnant’s shell. But given that the jets are oriented at an angle of 21° relative to the precession axis, why do we see distortion of the shell directly along the axis? Wouldn’t we instead expect distortion at 21° above and below the axis (at points

in Figure 3)? The authors argue that a related question is: have the jets of SS433 always behaved as they currently do?

Methods
The authors’ approach to answering these questions was to analyze the proper motions of radio filaments within the W50 nebula using VLA data spanning 12 years. They chose the ten brightest filaments in the images (shown in Figure 3) and tracked their motion over the 12 years, determining the filaments’ proper motion to within their velocity resolution of 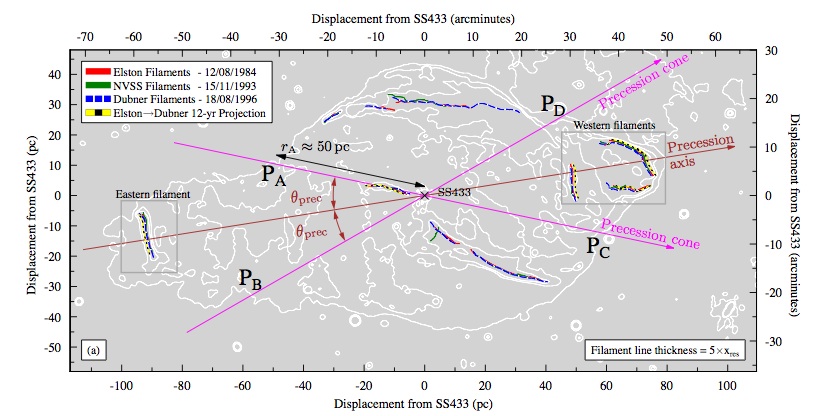 Figure 3: Filament positions overlaid on a contour map of W50. The points P_A - P_D indicate the locations where SS433's current jet configuration would penetrate the W50 nebula. (Figure 2 in the paper)

Results
To within their velocity resolution, the authors find that the filaments exhibit no motion over the 12-year period — indicating that if the filaments were moving, they would have to be doing so at less than 4.05% the speed of light. The authors conclude that there are two possible explanations for this: a) the jets of SS433 are decelerated to less than .0405c before encountering the filaments, or b) the jet in its current configuration has not interacted with these filaments, suggesting intermittent behavior of the jet.

The level of deceleration needed in scenario (a) would require a rather extreme kinetic energy loss of 85% before the jets reached the filaments — a scenario the authors were unable to produce via hydrodynamic simulations of the jets (presented in a companion paper). Thus they focus their attention on scenario (b).

The speculated solution for both the lack of motion of the filaments and the strange shape of W50 is that the jets of SS433 have experienced two different states of jet activity. The authors demonstrate that if the jets displayed a state in the past wherein the precession angle was close to zero, this would cause the elongation of W50 that is observed. And if the jets began to precess at a high angle fairly recently, they would not yet have had time to interact with the filaments or punch out of the supernova shell above the axis.

The authors support their suggestion by pointing out that intermittent jet activity is thought to be a common property of both microquasars and quasars — although the timescales for microquasars are usually on the order of years, whereas this scenario for SS433 would require an intermittency timescale several orders of magnitude greater. Nonetheless, if this scenario is correct, it could provide valuable insight into the jet physics and evolution of both microquasars and quasars alike.