In the past two decades, an onslaught of observational data has transformed the way we understand the structure and evolution of the Universe.  In particular, we have found a small set of simple assumptions that, when taken together, does quite well at broadly explaining the features of the Universe, including the Cosmic Microwave Background (CMB), the accelerating expansion of the Universe, the nature of large-scale structure, etc.  Four of the main assumptions in current, mainstream cosmology are the following:

refers to the cosmological constant (often identified with dark energy), and CDM stands for “Cold Dark Matter” (where “cold” here means that the dark-matter became decoupled from the other components of the Universe when it already slowed to non-relativistic speeds).  The

model, with various refinements, has done very well in explaining the structure of the Universe, and is often referred to as the standard model of cosmology.

Today’s astrobite paper gives a nice discussion of some of the ways that we can test this standard model, and outlines some areas that indicate that

could be improved upon.

The paper’s author classifies cosmological probes into two broad groups: geometric probes, and dynamic probes.   Geometric probes give us direct information about the cosmic metric, and can be subdivided into two main types:

On the other hand, dynamic probes tell us about the action of gravity acting on density perturbations to form large-scale structure.  Some examples of dynamical probes are: X-rays from galaxy clusters, the Ly-

forest (which tells us where hydrogen is distributed by redshift), lensing surveys, etc.

As we have mentioned, most of the information these different probes give us agrees well with the standard model of cosmology.  Now, what are the areas that

Current Shortcomings of the Standard Model

The author lists a number of shortcomings of the standard model.  Let’s briefly look at a few:

How do cosmologists deal with these shortcomings?  How should we approach these issues, considering the fact that

has been so successful? 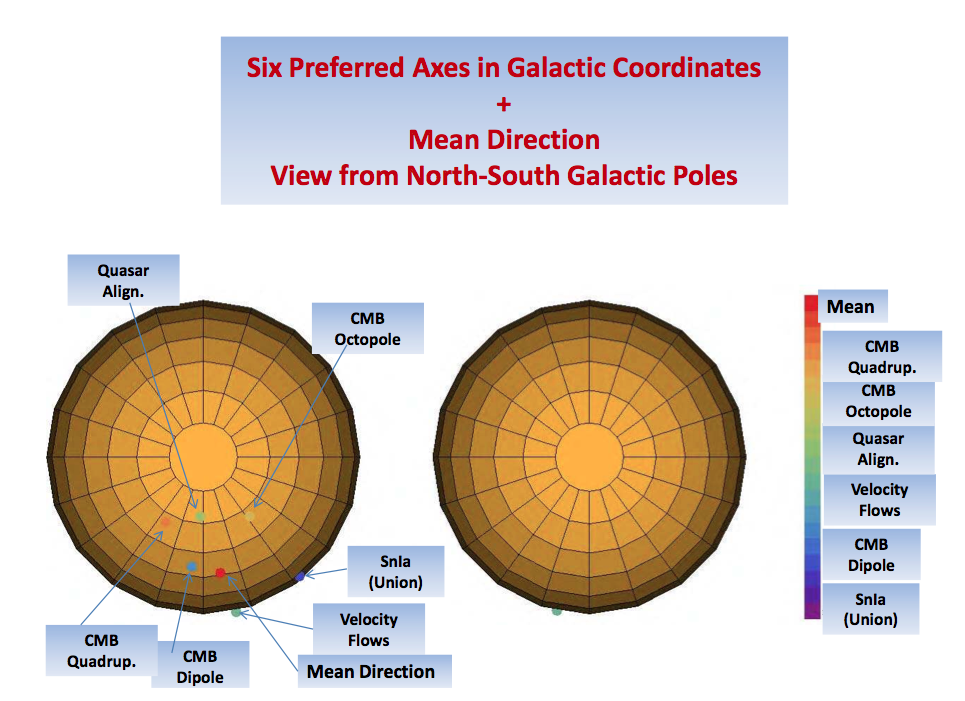 From Fig. 1 of paper. The author says: "It is straightforward to show (Antoniou & Perivolaropoulos, 2010) that the probability of such proximity among axes directions that should be independent of each other is less than 1%" Which raises the question: is the Universe truly isotropic?

Refining (or discarding?) the Model

An interesting point that the author raises is that there are different paradigms with which we might approach the standard model of cosmology.  Should we assume the validity of

then fine-tune its parameters to fit the data?  Should we focus on trying to come up with new theoretical arguments explain the few inconsistencies?  Or should we try an even more extreme approach and focus our efforts on the small fraction of data that most strongly violates

The best course is probably a combination of all three, and scientists continue to work from each paradigm.  Currently, it seems that one of the most obvious ways to patch up

is to impose a slightly preferred direction.  There are many conceivable ways for such a direction to crop up; a few examples are large-scale primordial magnetic fields, non-trivial cosmological topologies, an anisotropic dark energy equation of state, etc. (see the paper for a fuller list of proposed mechanisms).

In summary, we are living in an exciting time for cosmology.  On the one hand, we have in our hands an elegant, simple model which explains the “zeroth-order features” of the Universe very well.  But on the other hand, there are still interesting “first-order corrections” and mysteries in

(such as the nature of dark energy and dark matter) which reveal that cosmology still has a great deal of rich physics for us to explore and discover.