Dark matter is no longer a controversial element of modern cosmology.  Astronomers are quite literal with naming – “cold dark matter” means a type of matter that cannot interact with light (i.e. dark), and whose random thermal velocity is slow (i.e. cold).  Evidence supporting the existence of cold dark matter ranges from rotation velocities of galaxies, gravitational lensing (e.g. the beautiful Bullet Cluster), measurement of large scale structure (e.g. Baryon Acoustic Oscillations), the CMB power spectrum etc.   In fact, without the gravitational pull of cold dark matter, structure formation would’ve progressed far slower, and galaxies, stars, and life couldn’t have formed in time — so the fact that you are living and breathing today, only ~13.7 billion years after the Big Bang, can be considered evidence for cold dark matter!   All the observations point to dark matter outweighing normal matter by over a factor of 5, constituting ~23% of the energy density of the universe.

Separately, to solve various theoretical blemishes such as the Hierarchy Problem, particle physicists have long suspected that nature would introduce new shenanigans at the electroweak scale (~100GeV).   In various Beyond-the-Standard-Model theories such as supersymmetry, new particles naturally emerge at the weak scale.  Some of these particles might be stable, forming “Weakly Interacting Massive Particles”, or WIMPs.   Although the existence of WIMPs is hypothetical, the idea is not outlandish — you could imagine WIMPs as really, really heavy neutrinos.  Due to their large inertia and lack of interactions with regular matter, WIMPs are a natural candidate for cold dark matter.

Of course, this convergence of cosmology and high energy physics got folks pretty excited.  Since WIMPs are only weakly interacting, and not necessarily inaccessible, many scientists around the world have been working on experiments to detect dark matter directly.

A long, long time ago (starting 2003), in a land far, far away (Italy), there was an experiment called DAMA, which attempted to observe the effects of heavy nuclei recoiling from dark matter collisions.  This recoiling produces photons, which can be detected via photomultiplier tubes.  Of course, many boring things can also interact with nuclei, such as cosmic rays, and neutrons from naturally occurring radioactive elements.  Even with aggressive screening (such as sending your experiments down a deep mine 1 mile into the earth, along with some really dedicated graduate students), the background events still overwhelm the dark matter signal.

But instead of implementing more sophisticated background rejection like other experiments, DAMA had a different trick up its sleeve.  As our solar system orbits the center of the Milky Way, it moves at a velocity of ~200 km/s with respect to the galaxy, and hence feels a continuous WIMP “wind”.  So when our Earth orbits around the Sun, the velocity of the detector on Earth with respect to the cloud of dark matter pervading our galaxy will change annually.  It is this annual modulation of WIMP flux that DAMA claims to have detected.  Even the phase of the annual modulation seems to match the dates when Earth moves fastest into the WIMP wind, i.e. when Earth travels in the direction of the Sun’s motion in the galaxy. 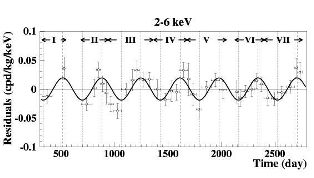 However, there is tremendous controversy regarding the DAMA results — as it should be, as the direct detection of dark matter would be the discovery of the decade, and any claims should be scrutinized with utmost prejudice.  Now, very few people object to the fact that DAMA has detected annual modulations in its recoil event rate — the statistics support a 8.2-sigma detection!  But a ridiculous amount of things on our planet are annually modulated – temperature, sunshine, humidity, distance to the sun, number of squirrels in the park etc.  If even one of these affects the DAMA background, their dark matter signal could be a fluke.  Just to show that science is not without intrigue and strife, other scientists have complained that the DAMA team have not made it easy for the community to verify their results — for example, they’ve secured exclusive rights for the use of the sodium-iodine crystals integral to their experiment, so right now, no one else can run the same experiment. To see criticism of DAMA from an expert in the field, check out this post by Juan Collar from U. Chicago at Cosmic Variance.  Much more importantly, other direct detection experiments (such as the Cryogenic Dark Matter Search, i.e. CDMS, which is more sensitive) eventually turned on, collected data, and did not see dark matter at the energies and cross sections implied by DAMA.  End of the story, right?

Fortunately, crafty theorists would not let an intriguing signal like DAMA go into obscurity without a closer look.  The challenge is then to explain why the other direct detection experiments got null results.

Previously, scientists considered an elastic collision between a WIMP and a nucleon, that is, a collision where the total kinetic energy is conserved, and the WIMP can only exchange kinetic energy with a particle in the detector.  However, in the inelastic dark matter theory, the cross section for elastic scattering is assumed to be suppressed.  Instead, the WIMP inelastically scatters off the nucleon, absorbing and converting the kinetic energy, i.e. the WIMP turns into a slightly heavier partner.   This is not an outlandish idea — all it really does is posit some structure to the dark matter sector.  Same thing happens all the time when you scatter a regular atom – the electrons can absorb energy, jump to a higher energy level, and by mass-energy equivalance, the atom becomes a teeny tiny bit heavier!

This is how it works in detail.  The minimum velocity for WIMPs to scatter in a detector with a deposited energy E is:

where M is the mass of the target nucleus, u is the reduced mass of the WIMP+target nucleus system, and δ is the energy difference between the ground and excited states of the WIMP.  As long as this energy difference dominates, heavier target nucleons require a lower velocity to give them a kick.  Therefore, the available fraction of WIMPs that can interact will be larger for more massive target nuclei, especially since we’re probably sampling the exponential tail of the dark matter velocity distribution, so a reduction in the minimum required velocity could increase the scattering rate drastically; for the same reason, the modulation signal of DAMA is enhanced, because Earth’s motion around the sun shifts the dark matter velocity distribution seen by the experiment.

Since DAMA’s target is iodine (A=127), whereas experiments such as CDMS use lighter elements such as germanium (A=73), inelastic dark matter theories could now explain why DAMA recorded detections while the other experiments came up empty.  It’s a cool idea, and many papers were written theorizing mechanisms to give WIMPs the right energy splittings, and many others predicted new observable implications of inelastic dark matter.  Nevertheless, especially with theories that were initially devised to fit existing data, one needs to perform more experiments before declaring victory.

Finally, back to the paper.  The Xenon Dark Matter Search Experiment uses 150kg of liquid xenon (A=131) as the detection medium, and is the most sensitive experiment yet for direct dark matter detection.  Recently, the Xenon team reported results for ~100 live-days of dark matter search.  Note that xenon is about the same mass as the iodine, and hence should be sensitive to the hypothetical inelastic dark matter seen by DAMA.  The results are sobering: 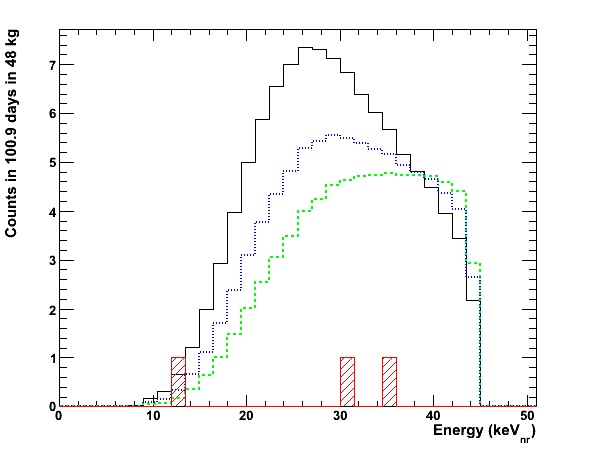 In the figure above, the expected spectrum of inelastic dark matter given various reasonable parameters are plotted in black, blue, and green.   However, the actual spectrum observed by Xenon100 is plotted in red.  They are drastically different.  Uh oh. 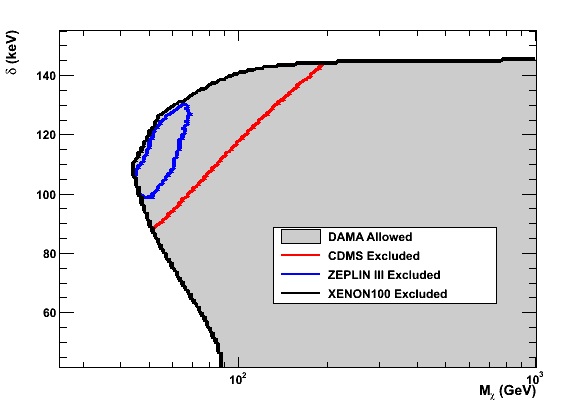 In the above figure, the parameter space allowed and excluded by various experiments are plotted.  As you can see, the latest Xenon100 results pretty much exclude all the parameter space that could have explained the DAMA signal with inelastic dark matter.  So either theorists have to go back to the drawing boards, or DAMA’s modulation is not dark matter.

And one last thing — the Xenon100 experiment did not detect any dark matter, not even the simple elastic kind.

So the hunt continues.  Happy Easter!