Newtonian physics works well for our everyday world, but it is Einstein’s theory of general relativity (GR) that seems to underlie physics on its grandest scales. Experimental tests of GR therefore require observations of extreme astrophysical systems combined with mind boggling sensitivity. The spin down of binary pulsars from gravitational waves is a famous example that was first detected in 1974 by Hulse and Taylor. Another recent result comes from Gravity Probe B, a satellite that after many decades of development and work was able to measure the slight frame-dragging from Earth’s gravity well. A last example are light echoes from black holes as photons from a flare in a disk are dragged around the black hole on different orbits to reach an observer in a series of pulses.

The mass of a stellar mass black hole warps the appearance of the accretion disk. Figure from http://jila.colorado.edu/~pja/black_hole.htm

This paper explores the possibility of probing GR effects from an accretion disk of gas and dust that spirals around a super massive black hole. Powering an active galactic nucleus (AGN) that lurks in the center of a galaxy, the black hole is so massive (think thousands to billions of solar masses) the region of the disk dictated by the laws of GR is very large. Therefore, any model that properly includes GR is quantitatively different than a Newtonian disk, especially in the inner regions of these disks. However, such objects are unresolved by our best telescopes so we cannot peer directly at these disks. To solve this problem, the authors suggest that clouds might move over the disk partially obscuring the disk. By modeling observations of these events, researchers might be able to see the effect of extreme gravity in the AGN environment.

To try to map out these disks, the authors suggest looking in the X-ray band that corresponds to the high energies produced near the black hole. Looking at both the iron emission line as well as a continuum from the light reflecting off of material in the region provides a tracer of the disk’s structure. The light will be relativistically Doppler shifted, beamed, gravitationally red-shifted, and bent depending on where the emission comes from in the disk and where it is going. Generally, you expect that the disk can be divided up into the half that is moving towards the observer (blue) and the other half that is moving away (red). As a cloud quickly eclipses our line of sight (~10-15 hours), it might block out the blue half leaving the red half exposed. As a result, the X-ray spectrum would change in an asymmetric fashion as the cloud moves across the disk. While the authors conclude that the Doppler shift and boost from special relativity are the strongest observational effects, how the cloud passes in front of the disk is also very important (see figure below). 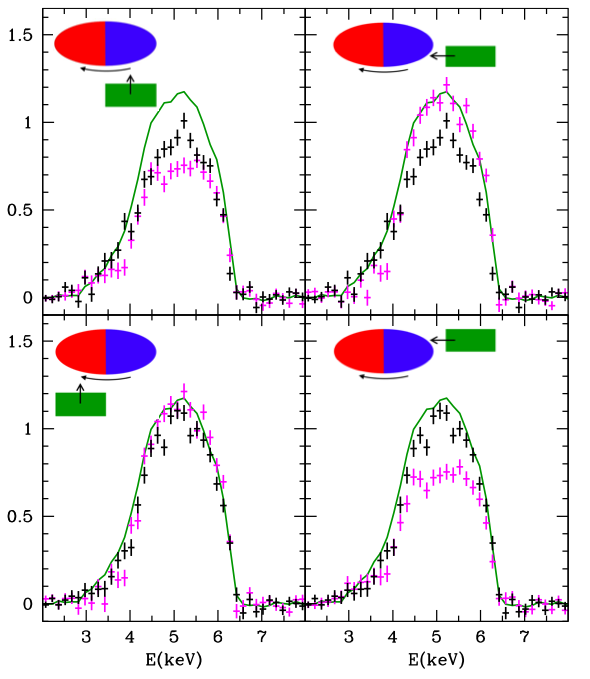 Simulated spectra from partial eclipses. The cartoon in the upper left corner illustrates the type of eclipse (oval is the disk with red and blue regions while the green square is the cloud). During the eclipse, you would first see the pink spectrum and then the black. The green is the total spectrum. Figure 3 from the paper.

Eclipsing events have already been observed for galaxies such as NGC 1365 although these observations are not yet continuous. Therefore, there is some hope that one might be lucky enough to observe a thick cloud passing over the entire disk. Using current instruments (XMM-Newton & Suzaku) it might be possible to actually observe this asymmetry and probe GR effects in AGN. Future instruments such as IXO could be expected to see many such events.