plerion (‘plɪərɪən) — n, “filled” – a nebula powered by the pulsar wind of a pulsar — Wikipedia

In the second astrobite in our Supernova Remnants Series, we review (the second half of) a review article that describes Supernovae in their second phase – the Sedov-Taylor phase, and their embedded gems – pulsar wind nebulae.

Review: Stages of a Supernova
A typical supernova goes through three distinct stages:

Transitioning to the Sedov-Taylor Stage
As the blast wave shock slows down, ejecta run into each other at the boundary of the remnant, setting up a reverse shock that propagates back into the ejecta, heating it up once more. Electrons are accelerated in the shocked ejecta, which then radiates primarily via synchrotron radiation. Radiative cooling is still inefficient – so the remnant does not lose energy appreciably and the expansion remains energy-conserving.

The Sedov-Taylor Stage
Once the blastwave shock from the expanding outermost ejecta sweeps up several times more mass than the original mass in the ejecta itself, a new phase of evolution begins – characterized by only two dimensional parameters, the energy of the explosion, E and the density of the circumburst medium, ρ. From these two and the time since explosion, a scale-free solution results, which gives the position of the blast wave as a function of time. Observationally though, it is very hard to categorically state whether a remnant is actually in the Sedov phase (characterized by a particular expansion law, R ∝ t2/5 and the absence of the reverse shock) – in fact, since the supernova explodes into a clumpy medium, different parts of it may be in different phases at the same time.

A New Player – the Central Pulsar
Ignored in these shenanigans is the central compact object, typically a neutron star. If this neutron star has a strong magnetic field, it may be a pulsar. As the pulsar spins, the magnetic field whips around, creating a turbulent electromagnetic field that, through processes not fully understood, produces electron-positron pairs and accelerates them to high energies. The resulting wind of charged particles cocooned in toroidal magnetic field parcels slowly drains the pulsar of its rotational kinetic energy. As the wind interacts with the surrounding supernova material and later, the ISM, it produces a pulsar wind nebula (PWN, or plerion), a beautiful example of which is M1, the Crab Nebula in Taurus. 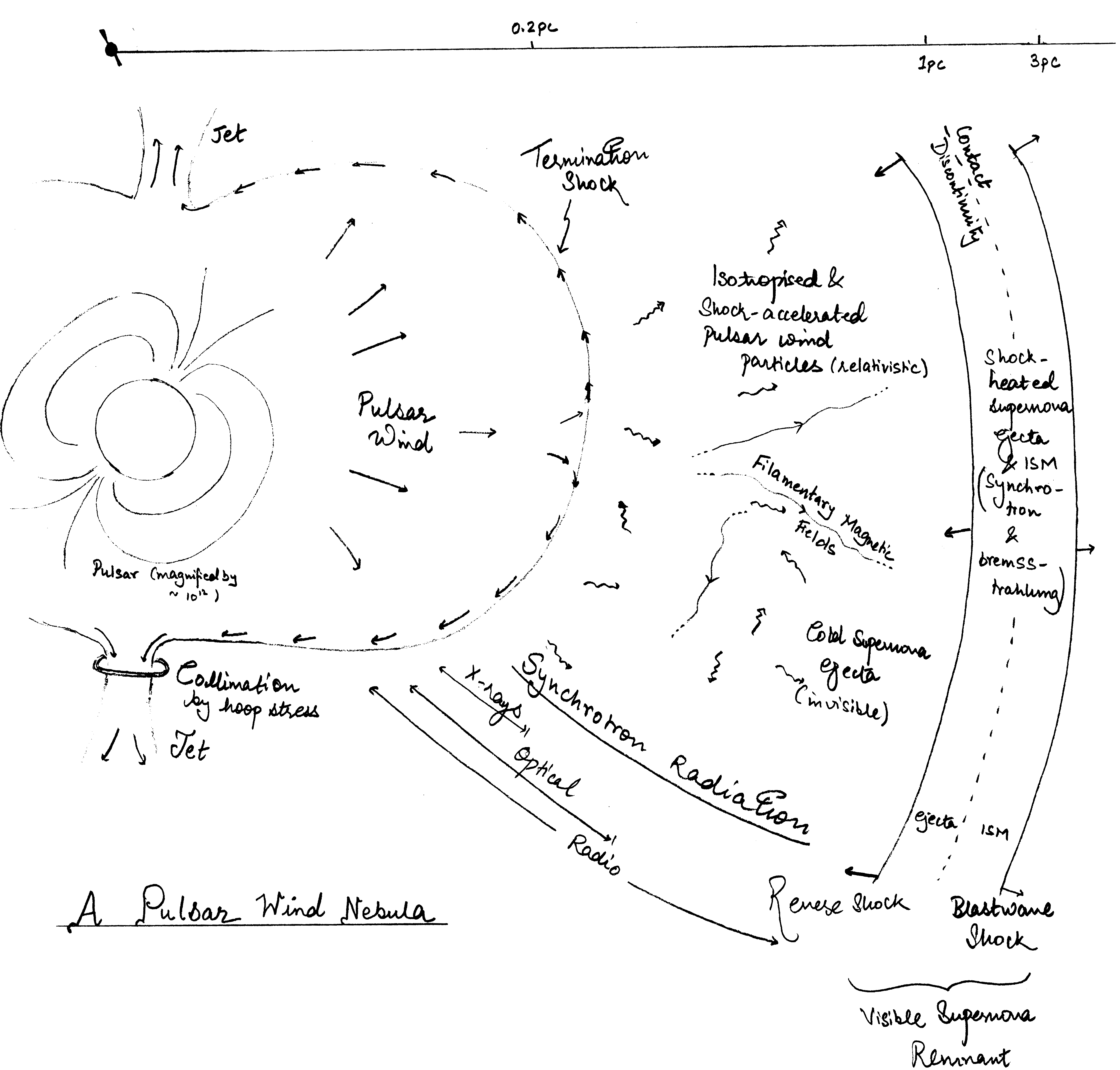 Structure of a composite supernova remnant with an embedded plerion. By Tanmoy Laskar

The Evolution of a Plerion

Pulsars are born with significant natal kicks of up to several 1000 km/s, that set them on ballistic trajectories through the remnant. Since the expansion of the supernova remnant slows down with time due to interaction with the ISM, a pulsar with a significant space velocity will eventually escape the remnant. For a supernova in the Sedov-Taylor phase, the sound speed drops away from the center, and the pulsar’s motion will become supersonic at about 68% of the distance to the edge. At that time, the pulsar is a bullet moving through the ejected material – a bow shock forms and the system gives off intense X-rays. When the pulsar escapes the remnant completely, the bow shock is formed in the ambient ISM.

SNRs are usually limb-brightened shells of synchrotron radiation, with steep radio spectra (ν-0.3 to ν-0.8), whereas PWNe are amorphous and brightest at the location of the pulsar, with flat radio spectra (ν0 to ν-0.3). Additionally, SNRs have tangled and disordered magnetic fields, resulting in low levels of linear polarization (5%-10%), whereas PWNe have large-scale ordered magnetic fields resulting in high degrees of linear polarization (30%-50%)

Outstanding Issues : Time variability
Besides the exciting relativistic magneto-hydrodynamic problems encountered in plerions, there is the issue of time variability – several PWNe have shown variability over the time scales of months to years. The answer may lie in some flow instability. New measurements with X-ray polarimetry and high-energy studies from Fermi are likely to broaden the prospects for the study of plerions in the coming years.

What’s next
Pulsar wind nebulae are found in supernova remnants in all stages of their evolution. As far as a supernova remnant in the Sedov phase is concerned, when the cooling times in the ejecta becomes comparable to the lifetime of the remnant, it will then cool catastrophically and enter a new phase – the snowplow phase.