The star formation history of the local universe

The star formation history of the universe is an area of active research.  As galaxies consume their gas into stars, newborn massive stars emit copious amounts of ionizing radiation and explode in powerful core-collapse supernovae.  Both of these radiative and mechanical feedback mechanisms can significantly affect the development of galaxies, resulting in the galaxy populations we see today.

Deep photometry from space and ground-based observatories have allowed astronomers to directly measure the in situ star formation history of the universe by counting the number of star forming galaxies we see at earlier epochs of the universe’s evolution.  One could alternatively observe the age and mass of resolved stellar populations in nearby galaxies to infer the star formation history of these systems.  These two disparate measurements should agree, except for departures due to cosmic variance.  In this paper, the authors use deep Hubble observations of a volume-limited sample (the ACS Neaby Galaxy Treasury Survey, ANGST for short) of nearby galaxies to measure the star formation using stellar population synthesis modeling. 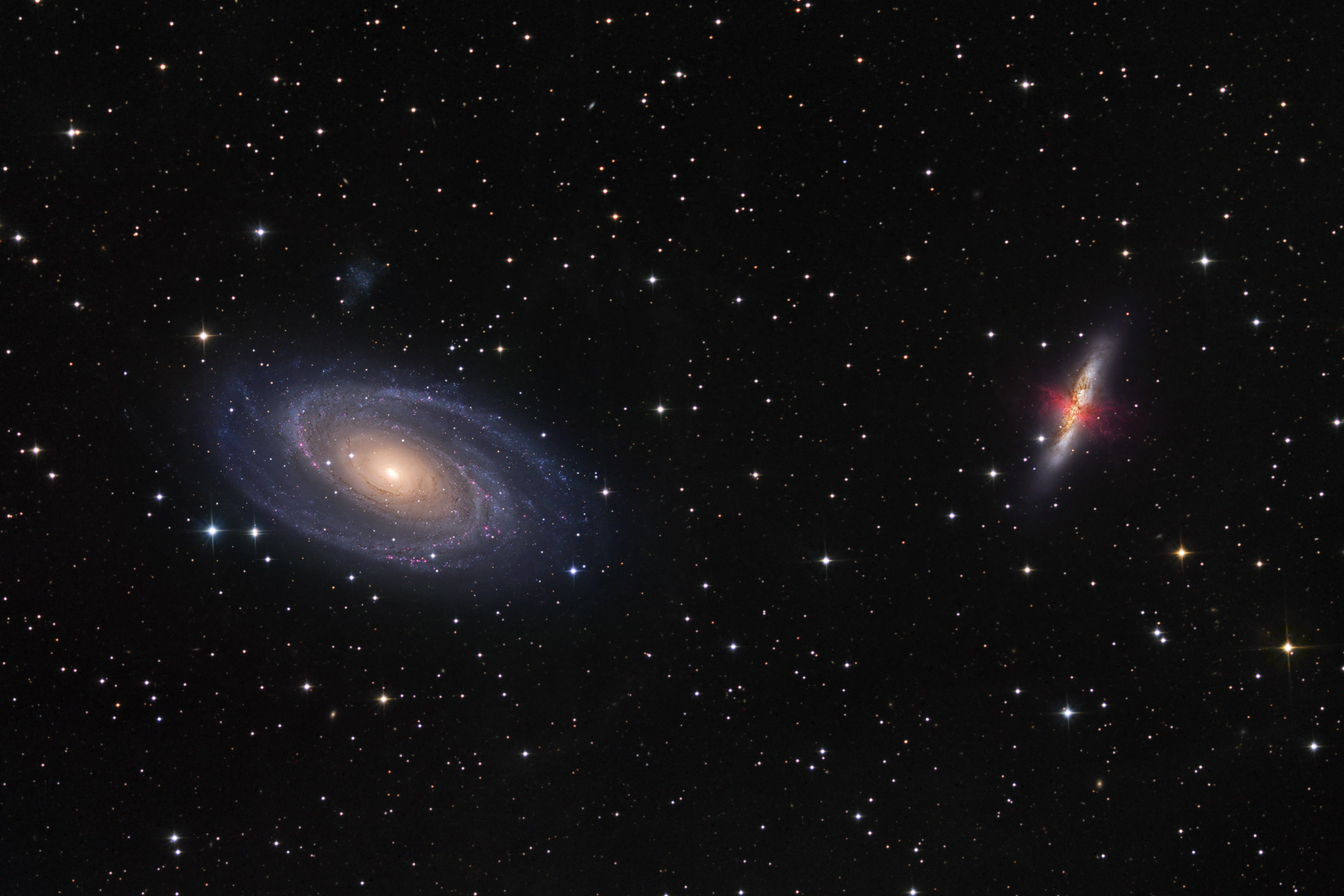 Figure 1: The nearby star forming galaxies, M81 (left) and M82 (right). Both galaxies are included in the ANGST sample. Credit: Johannes Schedler.

Measuring the star formation history of a resolved stellar population requires detailed models for the positions of stars in a color-magnitude diagram (CMD for short).  A CMD is just an observer’s version of the more commonly discussed Hertzprung-Russell diagram.  Models of stellar evolution and synthetic spectral modeling of the model stars are sufficiently advanced that the luminosity and color of practically any star can be predicted from its birth along the zero age main sequence all the way to the end of its post-main-sequence evolution.  A single stellar population, that is, a population born at a single instant that fully samples the stellar initial mass function, will, at any particular moment in its history, populate an isochrone, a line of constant age, in the CMD.  Two populations that are different ages will tend to fall along different isochrones.  In general, a real stellar population is a composite of multiple stellar populations with disparate ages.  By fitting a model CMD composed of many different isochrones, the observed CMD of a resolved stellar populations can allow an astronomer to infer the star formation history of a nearby galaxy. 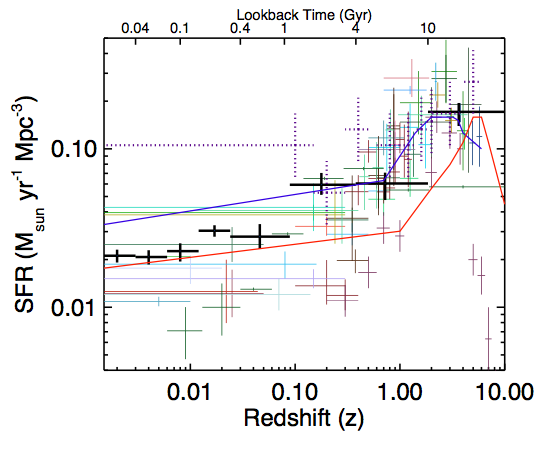 There are two complications inherent in this scheme.  First, the CMD does not change very much after the stellar population is more than a few billion years old.  This is related to the fact that massive stars are much more luminous than low mass stars and so have much shorter lifetimes.  For this reason, star formation histories inferred from resolved stellar population studies are most sensitive when probing young populations and must sample ancient star formation with very coarse time resolution.  Second, studies of resolved stellar populations require that the density of stars within a given image be low enough to reliably perform aperture photometry.  For this reason, star formation occurring in regions of high stellar density, like the bulge of a disk galaxy, might be missed using this technique.  This study does a particularly poor job of resolving the nuclear starburst in the dwarf galaxy M82. 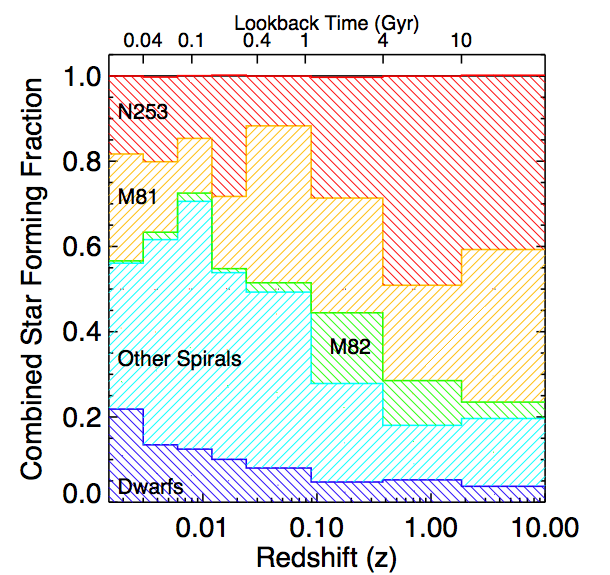 Figure 3: The fraction of the total star formation in the ANGST sample that occured in the three most actively star forming systems, the dwarf galaxies, and the remaining spriral galaxies.

The star formation density as a function of time is plotted in Figure 2 along with a compendium of results from studies of the local group, redshift surveys, deep imaging, and theoretical predictions. The thick, black error bars correspond to the observations from this study while the rest of the error bars and the solid, colored lines correspond to other measurements and theoretical predictions, respectively.  All of the observations are broadly consistent.  It is readily apparent that the volume-averaged star formation rate has been declining for most of the history of the univserse.

In Figure 3, the sample is broken down into five bins.  Three bins correspond to NGC 253, M81, and M82, the three most actively star forming galaxies in the sample.  The remaining two bins correspond to all of the remaining spiral galaxies and all of the dwarf galaxies in the sample. Two results are immediately apparent.  First, at high redshift, when the cosmic formation rate was at its peak value, most of the star formation occurred in the most massive systems we see today.  Second,  the most massive systems formed most of their stars long ago while the less massive systems formed their stars more recently.  This is broadly consistent with the idea of galactic downsizing, that the typical star forming galaxy was larger and more luminous in the past. Tantalizingly, extrapolating trends into the future, the results seem to show that the dwarf galaxies will host an increasing fraction of the star formation in the universe as time goes on while spiral galaxies have already reached the peak of their star formation. It will be interesting to see how these measurements change when including more distant resolved stellar populations, particularly in higher density environments hosting lenticular and elliptical galaxies.