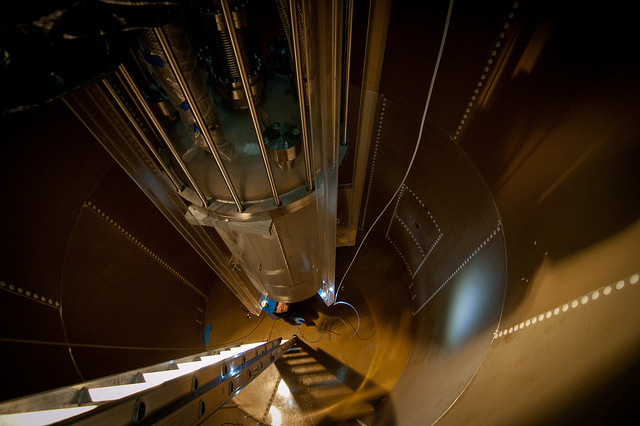 A member of the LUX team looks up from underneath the cryostat. Photo from http://luxdarkmatter.org/.

Introduction
The evidence for dark matter has come from many different astrophysical studies: rotation curves of galaxies, weak lensing from clusters, the power spectrum of CMB anisotropies, and clustering in large surveys are some famous examples that seem to need some sort of matter besides baryons. In addition, efforts to directly detect dark matter particles in the laboratory are well underway. There are a number of methods that have been employed by various groups to make this measurement from super-conducting transition-edge devices to liquid noble gas detectors. This experiment is fiendishly difficult. First, the expected signal is very small. Furthermore the backgrounds are very high from particles whizzing about from natural nuclear decay processes. While this generation of experiments search for a dark matter particle of a specific mass range (>50 GeV in particle physics parlance) this paper focuses on another method that can look for lighter particles (~5 GeV) that current facilities would not see. 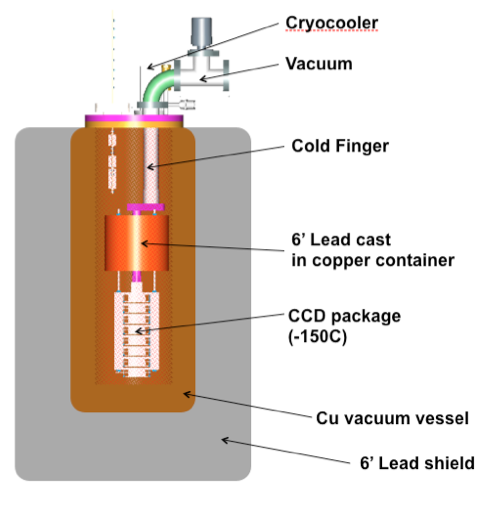 A schematic of the experiment (figure 8).

The Device
To look for these light dark matter particles, the authors investigate using the best friend of optical astronomers: a charge coupled device. These CCDs revolutionized the field of astronomy by replacing cumbersome photographic plates and can be found today in the heart of many instruments from your family’s digital camera to the Hubble Space Telescope. However, detecting dark matter requires a very special type of CCD that is massive and thick (300 microns for a weight of 0.5 g) to provide a larger detection volume. When a dark matter particle passes through the chip there is a chance that it will scatter off the nucleus causing a nuclear recoil and a localized charge cloud. Just as a photon from a distant galaxy leaves a charge excess on a CCD, the design efficiently moves this charge across the device and reads it as an electrical signal. For this paper, the authors present an engineering run of CCDs that were developed at Fermilab for the Dark Energy camera. Of course, the detector element is only a small part of this experiment called DAMIC. The apparatus must also include a cryostat and shielding (see figure on the left). The cryostat cools the chip to a 123K to reduce noise caused by electrical currents from the thermal motions of electrons (called ‘dark current’). The shielding provided by a thick wall of lead helps protect the detector from stray particles that scatter in the device and cause a background signal.

The Run
To test the suitability of these CCDs to detect dark matter, you first need to calibrate the device – that is, figure out what energy corresponds to the signal your detector produces. To do this, the device is exposed  to X-rays whose energy is proportional to the charge collected in the affected pixels. The resulting spectrum (see figure below) lets you convert from charge to ionization energy. However, using the calibration determined from X-rays to determine nuclear recoil energies is not a one-to-one conversion: the ionization efficiency for X-rays is different than that for nuclear recoils. Quantifying this difference is a non-trivial task and requires theory, assumptions, and more calibration runs bombarding the chip with neutrons to produce many scattering events. Even with all this hard work, the conversion factor is still not well understood (especially at the low energy end that matters) and will need to be investigated more. The actual engineering run was done underground where the Earth can help shield the chip from cosmic rays and other backgrounds sources. To accumulate event statistics the experiment operated for 11 months and the results showed (see figure below) that this technology could provide limits on the cross section for low mass dark matter. Craig Hogan, the director of the Fermilab Center for Particle Astrophysics, describes the application of CCDs for dark matter detection well:

“It is a delicious irony that these detectors, which are so perfectly adapted for peering to the edge of the universe that we take all the way to Chile for better skies, are now buried in underground caverns to look for invisible particles”
(original article)