If you’re a brash, young spiral galaxy, stuck in your ways and resistant to change, from what do you have more to fear: external or internal influences? As we’ve discussed frequently on Astrobites, simulations and observations both show that collisions between galaxies (exterior influences) play a significant role in their evolution. Roughly 1/4 of spiral galaxies (including, it seems, the Milky Way) have “bars” at their centers — long (~3-10 kiloparsec, kpc), linear formations of stars. How bar features are developed remains an open question, but the gravitational potential of these bars should certainly have some effect on the dynamics of the galaxy around them.

These authors use observations of a carefully selected sample of hundreds of nearby (redshift z<0.06) galaxies to probe the relative importance of collisions and the internal influence of bars ("secular evolution") in increasing the star formation rate (SFR) in galaxies. The authors analyze SDSS optical spectra taken at the center of each galaxy in their sample to probe their star formation histories. The most prominent features in these spectra are the very bright, narrow emission lines produced by gas ionized by hot, young stars (“HII regions”). The fluxes of the emission lines produced by different elements and different ionization states can be compared to models to estimate the number of young stars ionizing the gas, which tells you about the present-day star formation rate.

Metallicity (the abundance of elements heavier than He) can be derived in a similar way. You can directly compare the spectrum to photoionization models or use one of many simple analytic formulas that have been calibrated against models or observations. The metallicities give you some information about the past history of star formation in the galaxy because metals are produced in stars and recycled into the gas of the interstellar medium when they explode as supernovae. Measuring a higher metallicity could indicate a past burst of star formation.

The authors find that the SFR is about 60% higher in barred spirals than ones without bars, but only at the very center of the galaxy. This is consistent with simulations that suggest that bars produce radial inflows of gas that builds up in the center (

). In contrast, the central metallicity is enhanced for barred galaxies of all masses in their sample. They suggest that a similar burst of star formation is prompted by the formation of the bar in all the galaxies, but that it is more short lived for lower mass galaxies because the available gas is depleted more quickly. Thus, we only see the trace of this burst in the form of chemical enrichment. 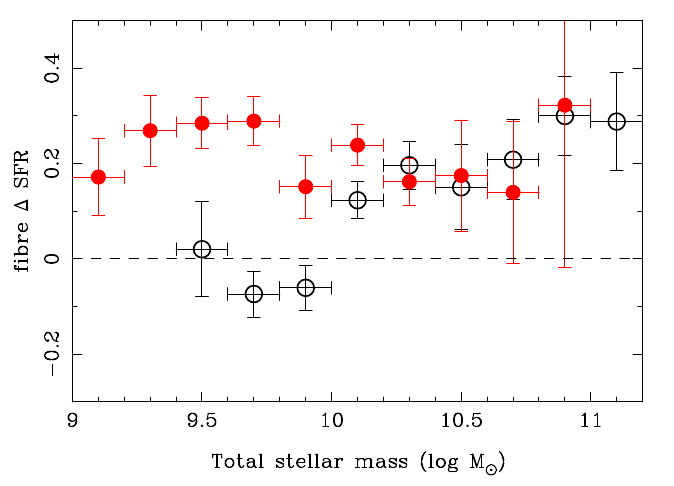 Next the authors examine a sample of interacting galaxies (galaxies within about 30 kpc of eachother, where 30 kpc is roughly the radius of the disk of a large spiral galaxy). While the SFR is enhanced for galaxies of all masses, the authors suggest that this is simply because we are catching the galaxies in the act by selecting those undergoing active interaction. In fact, the boost to SFR may be short lived for the lower mass galaxies, just like star formation driven by bars.

They find that star formation is also about 60% higher in interacting galaxies than quiescent ones, indicating that in individual cases the effect of interaction is similar to that of bars. However, they argue that the relative occurrence of bars and mergers are such that bars generate 3.5 times as much star formation in the center of galaxies as mergers in the universe overall. This work adds to our ever-growing understanding of how galaxies evolve.