Introduction
Imagine trying to spot a lit candle next to a car’s high-beam headlights at night.* In the attempt to directly image exoplanets, this is approximately what scientists are trying to do — extract the signal of a planet that’s often a factor of

dimmer than its star and located only a fraction of an arcsecond away. Previous suggestions of how to approach this problem have included a coronagraph internal to a telescope or using nulling interferometry between formation-flying telescopes, but both of these options have proven to be difficult and expensive to implement in next-generation space telescopes.

A possible alternative to these approaches is the idea of using an external occulter to block the light of the parent star such that the planets become visible. To achieve the desired shadow size and depth, however, this starshade would have to be flown on a spacecraft separate — and some distance away — from the telescope. This concept is illustrated in Figure 1.

In this paper, the author performs an analysis of starshade parameters and discusses the tolerances necessary when engineering such occulters.

Formulation
The main catch to this approach is that blocking starlight with an occulter isn’t a straightforward process: even if the occulter is directly between the star and the telescope, the light will diffract around the edges of the starshade and into the telescope. For starshades to provide a viable means of exoplanet imaging, scientists first had to find a means of suppressing the diffraction around the shade.

Luckily, this diffraction suppression can be achieved by means of something called an apodization function — a function describing a change in shape or opacity of the starshade so that it transmits light differently at different points of the shade. Creating a starshade governed by a well-chosen apodization function means that, rather than taking the form of a uniform circular disk, the starshade allows the wavefronts of light traveling through and around it to cancel each other on the opposite side. Thus the effects of diffraction can be significantly reduced.

Prior to 2006, all starshade designs that created an adequately large and deep enough shadow were also unrealistically large. But in 2006, the author of this paper proposed an apodization function that reduced the required starshade diameter to a few tens of meters across — which, he argues, is a physically realistic size to be carried on a spacecraft. 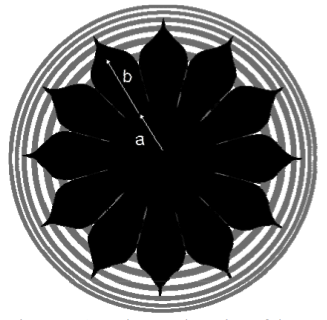 Figure 2: A twelve-petal version of the starshade is shown schematically. Figure 7 in the paper.

Practical Concerns
Assuming the use of this new apodization function, the author then translates the theory into a practically executable design.

A starshade that transmits light according to this apodization function exactly as described would need to be made of a variably transmitting material that allows a different fraction of starlight to pass through at each radius. Besides being difficult to manufacture, this would potentially introduce new scatter from the transmitting material. Luckily, the circularly-symmetric apodization function can be well approximated by an array of petal-shaped apertures, allowing for what is termed a “binary” starshade — the starshade is made of opaque material and at each point, it either exists or it doesn’t (see Figure 2). This design is beneficial in multiple ways. Firstly, an opaque starshade places fewer constraints on the quality of the starshade material. Secondly, each petal operates as an independent aperture: the light cancels around each petal individually. This means that the diffraction from one side of the shade is not used to cancel the light from the other side, so there is no need for uniformity of design from one petal to the next. The author determines that a minimum of twelve petals is necessary to achieve the desired depth of shadow (resulting shadow shown in Figure 3). 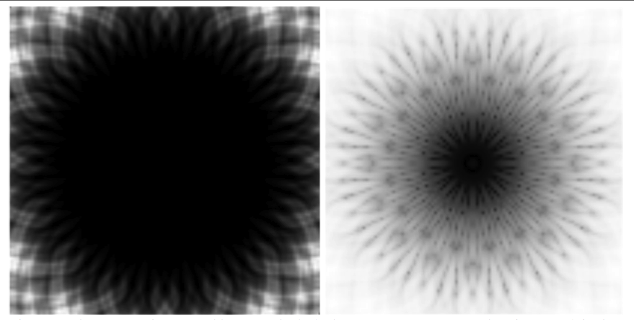 Figure 3: The shadow resulting from a starshade flown ~80,000km from the telescope. Left plot is of the intensity of the shadow on a linear scale, showing the complicated diffraction patterns toward the edges and the fast fall-off to the center. Right plot is the same diagram on a log scale, showing more complex structure and a very deep shadow toward the center. Figure 4 in the paper.

Using a combination of analytic calculations and numerical modeling, the author then uses this design to place constraints on such parameters as the alignment of the starshade and telescope, the shape of the petals, the amount of allowed distortion to the shade (what happens if the starshade gets damaged in transport?), the degree of accuracy required in constructing each petal, etc. These calculations provide a reasonable idea of the feasibility of this design: will this starshade be fairly forgiving if slight imperfections exist or damages occur? Or will a single error render the entire mission useless?

Conclusion
The author concludes that using an external starshade as a means of directly imaging exoplanets is feasible. His tolerance calculations support the idea that the starshade approach is forgiving to small asymmetries in manufacture, or distortion that could result from damage to the components. Moreover, he has demonstrated that use of a starshade could effectively allow for imaging of Earth-like planets located at much greater distances from us (and much smaller distances from their host star) than we currently have the capability to image.

For more information on missions that employ the use of a starshade, check out:
• New Worlds Observer
• THEIA

———–
*disclaimer: Astrobites does not endorse attempting to do this