Reconstructing the Past: Metallicity Abundances in Dwarfs

In the past decade, the discovery of numerous satellite objects around the Milky Way have provided fertile soil for investigations into the history of galactic formation. These objects have old stellar populations and high mass-to-light (M/L) ratios, suggesting that they are the satellite dwarf galaxies as predicted by the canonical Lambda-CDM — the current state of which Joshua recently discussed. In this cosmological framework, smaller dark matter halos merge hierarchically, gradually forming larger structures. As a result, not only is it expected that the Milky Way (MW) should be surrounded by smaller galaxies, but also the MW itself should be the product of numerous past (and ongoing) mergers. If this is true, then stars in current satellites ought to bear a statistical similarity to stars in the MW halo.

Lai et al. present a study in which they examine the metallicity abundances of various elements, in order to compare them with observations of stars from the MW halo. While some studies focus on high-resolution spectroscopy of one or a handful of stars, their investigation uses the LRIS instrument at the Keck Observatory to obatin low-resolution spectroscopy for a sample of 25 stars from the ultra-faint, Bootes I dwarf spheroidal (dSph) galaxy.

The only selection criteria used is that the targets stars have confirmed radial velocity membership in Bootes I (as determined by Martin et al. [2007]) which means that all appear to be moving coherently with respect to the MW and are thus almost certainly gravitationally self-bound. Moreover, despite not being selected based on spatial extent, all of the 25 stars are within the half-light radius of the Bootes I galaxy.

To obtain metallicities, observers have several options. The most straight-forward is to simply measure the strength (a combination of depth and width, using calculated as equivalent width) of the desired spectral line. However, with metal-poor targets (i.e., targets in which the absorption is weak compared to the continuum emission), and especially when observing such targets with low-resolution spectrographs, better estimates of the metallicity can be obtained via modelling the primary parameters of the stars themselves. Thus, the authors use the SEGUE Stellar Parameter Pipeline to find a best fit model to determine simultaneously the effective temperature (Teff); surface gravity (log g); the canonical metallicity, [Fe/H]; and the abundance of alpha-elements, [α/Fe]. Lastly, the authors chose to observe two globular clusters with well-constrained metallicities (from previous studies), in order to validate their own metallicity measurements. These comparisons show that the methods are indeed sufficiently accurate. 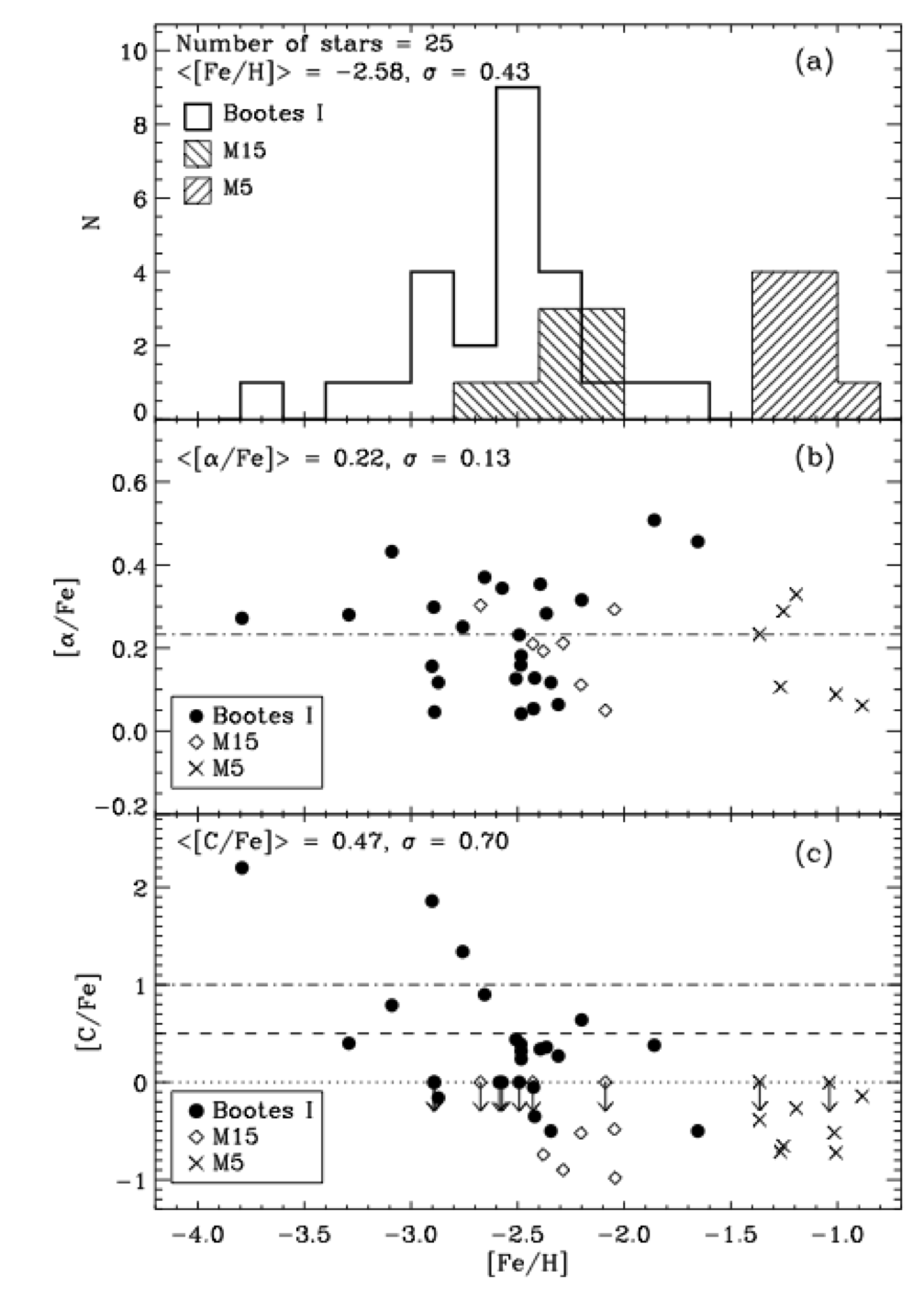 Original Caption (Lai et al. 2011) — Figure 4. (a) The MDF for our sample using a bin size of 0.2 dex. The open histogram, along with the reported sample values, are for our Bootes I sample. The filled histograms at {Fe/H} ∼ −2.4 and {Fe/H} ∼ −1.2 are the values we measured for our M15 and M5 stars, respectively. The metallicity spread and metal-poor nature of Bootes I is contrasted to the M15 and M5 distributions. (b) The {α/Fe} values measured for our stars. The filled circles are for the Bootes I stars, the diamonds are for the M15 stars, and the x symbols are for the M5 stars. In this case, the distribution of {α/Fe} is very similar between Bootes I and the cluster stars. (c) The {C/Fe} distribution of our sample. The {C/Fe} for Bootes I range is both clearly larger and higher than the {C/Fe} of the cluster stars.

The figure at right (parts a-c, top to bottom) presents the primary results from this investigation. Lai et al. find that their 25-star sample of Bootes I has a mean metallicity of  <[Fe/H]> = —2.59, with a large spread of σ ~ 0.43, as can be seen in Figure 4a. While some of this scatter is due to individual, measurement errors, the authors calculate that the true, intrinsic scatter is still very large, at σ ~ 0.38 (See Eq. 8, Kirby et al. [2011], for details). Importantly, this mean and distribution place Bootes I in alignment with the standard metallicity-luminosity relationship. This may provide additional support that Bootes I (and other dSphs like it) are “normal” galaxies, in the sense that they are gravitationally self-bound objects in their own dark matter halo — as opposed to tidal remnants of larger galaxies or globular clusters, as proposed by some theories (e.g. Pawlowski et al. 2011).

As seen in Figure 4b, the vertical spread in [α/Fe] for the Bootes I stars is no greater than the spread for the globular cluster stars. Since the cluster stars are known to have no [α/Fe] spread, the results are consistent with also having no intrinsic spread. The authors note that this flat distribution is consistent with halo stars, and in particular with stellar populations in which Type Ia supernovae (SNe) events contribute little to the enrichment process; rather, Type II SNe are the primary mechanism for chemical evolution. Meanwhile, Figure 4c shows that the a notable fraction of stars have high [C/Fe] measurements, relative to the globular cluster stars. The authors calculate a fraction of carbon-enhanced metel-poor (CEMP) stars as 12% ± 7%, which they note is consistent with studies of the halo fraction of CEMPs, which ranges from 9% to 25%.

In conclusion, the results suggest that ultra-faint dwarf galaxies, such as Bootes I, may have been disrupted and helped to form the outer halo of the Milky Way.