Sticking to dust
Current theories of planet formation imagine the birth of planets in gaseous dust disks observed around young stars. In one scenario, micron-sized dust particles bump into each other and stick together, eventually conglomerating to form larger bodies – planetesimal seeds for the planets we observe many years later. This one-sentence summary hides a plethora of complicated and fascinating physics. One important question is how this sticking process works. Since the length scales associated with this story have a large dynamic range – from dust grains (10-4 cm) to planets (1010 cm) — there is no single answer to this question. Rather, one might try to understand the process associated with one scale and then try to build a consistent story for the entire process. This paper describes an experiment (conducted on a plane!) to directly test the sticking action of dust.

Example images of collisions between dust particles (right) along with a collision target (left). Each image is separated by 19 ms. (Figures 4 & 5 from the paper)

Adhesion between dust grains comes from surface forces such as van-der-Waals forces and hydrogen bonding. However, you can imagine that a collision between two grains could have a variety of results and, indeed, experiments have seen particles stick, break, and even bounce. Ices – volatile gases that have condensed on the dust particles – form a surface layer that might be able to facilitate this process. Furthermore, these ices are thought to be common in the dense, cold regions of planet forming disks so understanding their ‘sticking’ properties is important for the study of planet formation. The experiment discussed here looked at the collision behaviors of millimeter-sized dust and ice aggregates.

The Experiment
These collisions occur in space where the relative velocities are determined by gas turbulence and drift. Therefore any laboratory experiment needs to be done away from the Earth’s gravitational field which would otherwise dominate the dynamics of the system. To solve this not-so-small complication the researchers put their lab not into space, but on an Airbus A-300. By (carefully) following a parabolic flight path, a plane can provide about 25 seconds of microgravity — plenty of time to throw two ice particles together. While ‘watching dust stick’ might sound like a very simple experiment, the challenges of microgravity require a clever design to control the ambient temperature and pressure while squeezing the most science out of a limited number of parabolas. For example, to simulate the aggregation of millimeter-sized particles onto larger bodies, the experiment included a collision target that could rotate to mimic various impact angles. 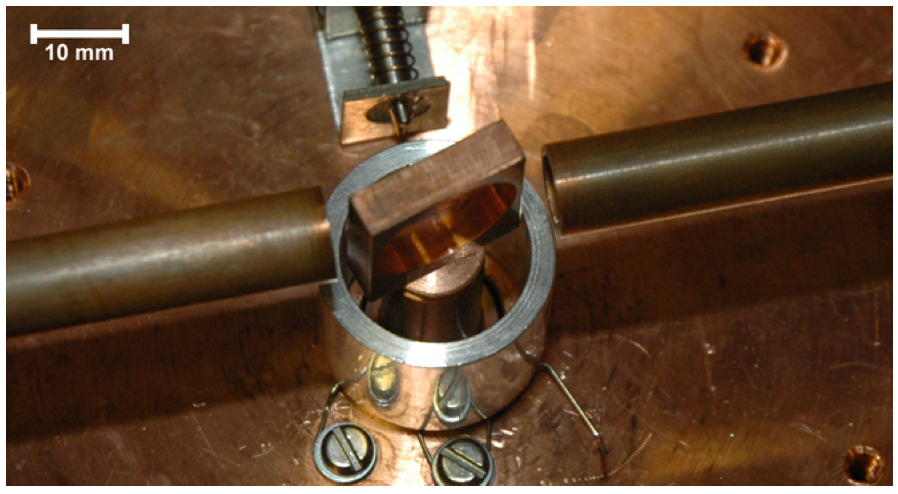 Picture of the collision target. The particles are 'shot' out of the two copper cylinders pictured to the right and left of the target. (Figure 3 from the paper).

One interesting collisional behavior observed during this experiment was that only ~5% of the translational kinetic energy was conserved after a collision. Most of the energy was turned into rotational energy as the particles bounced and began spinning. However, the collisions were captured by a high-speed camera with a small depth of field so the authors were not able to quantitatively analyze this behavior. Rebuilding the experiment while it is on the plane was not an option, so further improvements will have to wait until the next flight campaign.